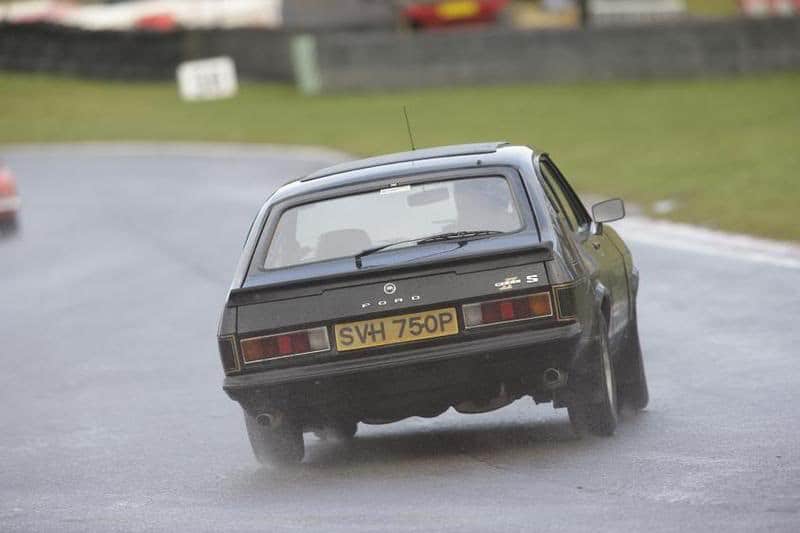 I know right? Another bloody Capri.

What can I say? I can’t help myself. I’m simply a glutton for poor handling, slow, rusty, unreliable punishment. This one had a V6 in it though, so at least I was heading in the right direction. Plus, it was only £500 which, for a 1976 Mk2 3.0S is really bloody cheap. It was, however, £500 for a reason…

It’s in there somewhere

Looked terrible, but in reality it wasn’t all that bad. Yeah, so it had a load of junk piled on it and it hadn’t moved for a long, long time, the inside smelled of wee and it was… well, it was just a bit tired. A bit of a heap to the untrained eye, no doubt. It was a cared for heap though, and that’s what made all the difference.

I bought it off a mate of mine called Andy, a man who went by the pseudonym of Capriaddict on various online forums. Capriaddict. COME ON! If I was going to buy a Capri from anyone it should be a man with a moniker like that. I’d be foolish not to. As such, I took his word on the vehicle’s condition, coughed up the Cortina-generated £500 that had been in my pocket for such a short period of time it hadn’t yet reached body temperature and arranged for the 3.0S to be delivered to Jason, my man with a plan (and a garage) in Bristol.

Barn fresh. Somewhat of an oxymoron

Somewhat uncharacteristically for a Pollitt purchase, the old 3.0 didn’t actually need a lot doing in order to get it on the road again. If memory serves, it needed a starter, or an alternator. I can’t remember, it was a long time ago. Basically it needed a new mechanical bit that could spin, a service and the right wheels, not the gopping steels it arrived on.

I *cough* Jason *cough* did all that and then, via the power of magic, a Stevie Wonder-esque approach to awarding a car legal document of roadworthiness and some new petrol, I hit the road. I had no choice, as it was destined to be my daily mode of transportation.

Borked, ancient Essex V6 with undeterminable mileage. Old, hard tyres, brakes that sort of did something and a viscous fan that sounded like a seagull being put through a blender and an idiot behind the wheel – WHAT COULD GO WRONG?!

Nothing, actually. It was quite reliable. Sorry.

Looking back, it wasn’t a bad investment. It was a Mk2 which is my favourite generation of Capri, so that was a winner. It had a 3.0 V6 which, I think, had been ‘breathed on’. At least I assume so as it went well enough. It had a stainless exhaust system to help too, but I don’t think stainless pipes were the sole enabler behind the the S clocking 125mph on a, ahem, private race track (verified by the sat-nav, before you call lies) late one evening.

When polished up it looked great, and when dropping my daughter off at daycare, I could see pure envy in the eyes of the other dads. Mwa ha haa.

At work it was a different matter. You’d think – as I was Assistant Editor of Retro Ford magazine at the time – that my colleagues might have been excited by my black beast (stop whatever you’re thinking – that’s rude). They, however, were not. Instead they opted to endlessly wind me up by calling it a JPS when it wasn’t (the stripes are, and always have been S stripes – the John Player Special cars borrowed them) and questioning why I’d opted for a car from the late ’70s with a Webasto roof?

I hated them. So, when a magazine-sanctioned track day at brands Hatch came about, I thought I’d show them what was what. You know, prove the old girl still had some bite. Or go out in a blaze of glory. Either would be a win in my book.

It went pretty well actually. I had some tuition from the instructors so I knew where to turn in, apply power and brake (a futile activity in the S, it has to be said). So confident was I after my tuition that I started offering passenger rides to all and sundry. I WAS CHANNELLING THE TALENT OF HARVEY, MENU, REID AND ROUSE! I was UNSTOPPABLE.

Then I went out on my own. I hammered it around the final corner – Clearways – and thought I was sliding round like a hero. I full of gusto and testosterone, I arrived in the pits to declare “I’ve just drifted Clearways” only to be told I had done no such thing. I wasn’t going that fast and the car sounded like a bag of spanners in a Zanussi. The ‘drifting’ sensation I felt was probably a sloppily attached back axle.

I still haven’t lived that down.

Power oversteer, not a drift

After more mockery I decided to do something proper to the car. I’d enjoyed the track stuff, so I thought I’d get it set up for that, starting with a roll cage made by Jon and his team at TubeTech in Manchester. It was a work of art and filled me with enthusiasm for the project.

Sadly though, that’s when the divorce happened. If was going to have any money to sort myself out, the Capri had to go, and go it did. For £1000. I know, I’m a knob. Desperate times though.

I miss that car, it was good fun. I did have some sort of idea where it was, but then the years rolled by and I guess things changed. If you’re out there, Capri owner, I’m always interested in buying her back, just so you know.