Have you spawned many offspring? Do you haunt the isles of the local garden centre on a regular basis, like some sort of green-fingered phantom? Are you forever going to B&Q for various building materials? Or do you do none of those things, and instead you just like a car that has practicality aplenty? Science and marketing would tell us that you need to go out and buy a Nissan Qashqai, but to that we say NO. NO GOD DAMMIT. We are traditionalist here at Not £2 Grand and we will not stand idly by while the SUV eats into the automotive landscape like the tall, yet crap at going off-road cancer that it is. No sir. We will instead fight the good fight, and shout loudly about the estate car. Why? Because the estate car is the best car. Big, practical, but all while retaining the charm and river appeal of the car on which it’s based, the estate is the perfect storm of enjoyment and practicality. 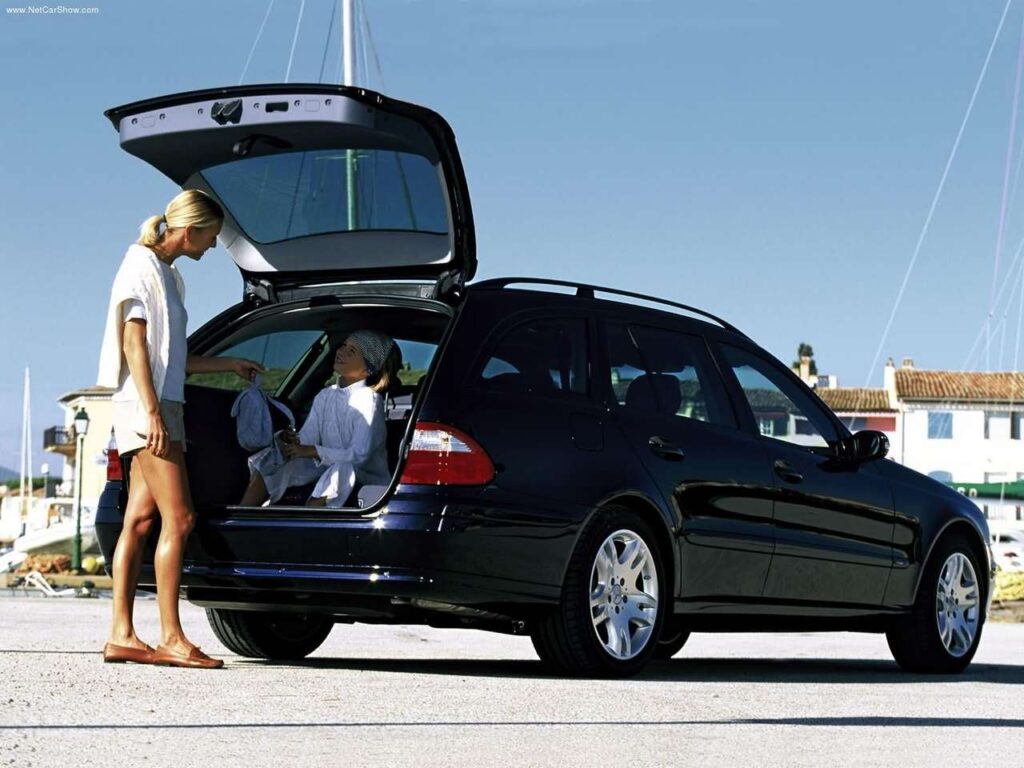 The other thing about estates, is that more often than not, they’re quite luxurious. And that’s nice. If you’re a little too fertile, it doesn’t mean a life on the road staring out over the depressing plastics of a Renault Espace dashboard. No, you can it in the cockpit of a premium machine, but one that has acres of space out back for your snotty bundles of… joy? The estate is elegant, it’s cool and it’s timeless. It doesn’t scream ‘ I have given up on my life’ like an SUV. It says you’ve still got it. You’re still in control. You’re still winning. And that’s even more apparent when said estate is a luxury model. But which luxury model? There are many to choose from, but to make it easy for you, we have rounded up five of the best. 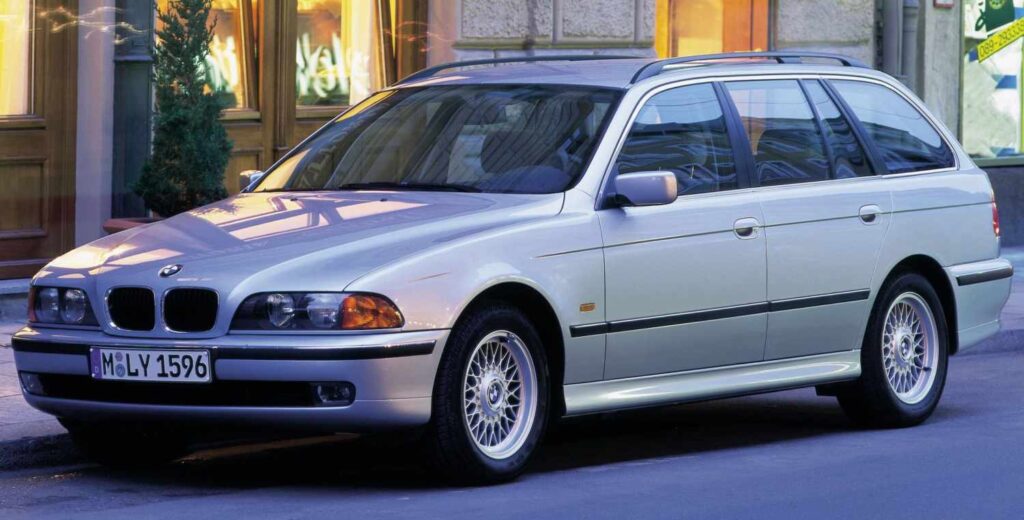 We’ve got a real bee in our bonnet about the BMW E39 of late. Our online search history is full of E39s, and we’re okay with it. It was and still is a fine machine. Handsome, reliable, comfortable and exceptionally well built, an E39 – if you buy one that’s not been abused – could be the last car you ever need. It’s also a BMW that’s timeless in design. You could live on the swankiest of modern housing developments, but put an old E39 on the drive and it’ll fit right in. It’s not brash, but it is elegant. Unlike modern BMWs, which make children cry. Hideous things.

For our money, we’d go for an SE with the 2.8 straight-six engine. There is a lot of metal to move, so the 2.2 will be under-powered (we had one – they are). of course, if you can find one, a 3.0 isn’t to be sniffed at. Diesels are decent, but we live in an age in which diesels will soon be taxed off the road, so probably best to avoid. The dream specification would be a Sport, as the alloys and body-styling of that model set it off a treat. However, a cheap Sport might be a bit of a gamble. As such, stick with SE spec, shop around and get a good one. Thank us later. 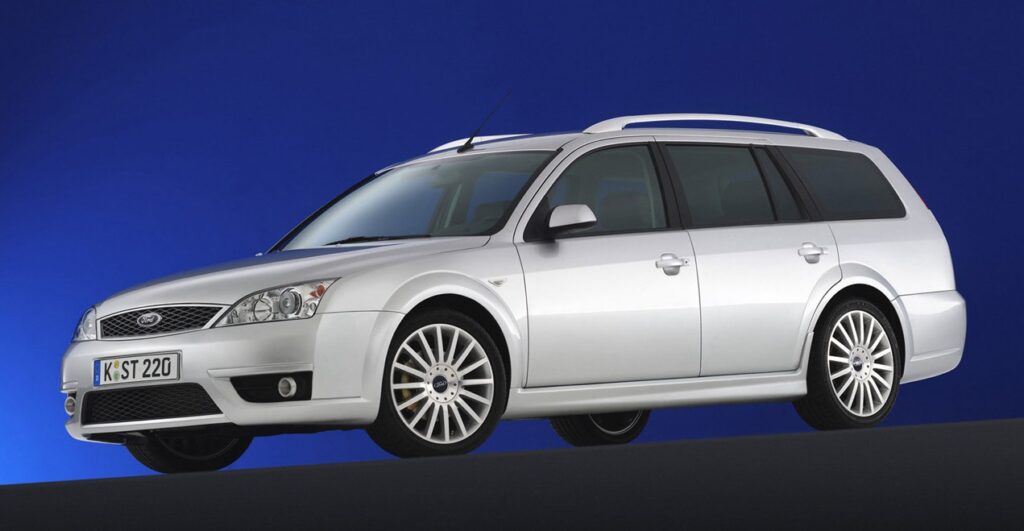 Mondeo? Luxury? Pardon? No, we haven’t taken leave of our senses. A 2.0 Edge is a minicab, but we’re not talking about the Edge here. No, we’re talking about the ST models. More specifically, the Mk3 Mondeo. The Mk4 is well in the reaches of the £2,000 buyer, but if you want to buy the best, that money goes a lot further by going back to an older car. Furthermore, the ST – both V6 ST220 and 2.2 diesel ST TDCi) have gained a passionate, enthusiastic following. Buy a Mk4 and you’re just buying a car. Buy a Mk3 ST, and you’re buying a car that has been enthusiast owned, and there’s something reassuring about that. As long as you go for the genuine enthusiast, not Gary who bought one because he’s got six points and can’t afford a Focus ST.

The Mk3 is also, dare we say it, a better estate than the Mk4. The boot is big enough to hold a festival in (but only if you wear masks) and the entry is low and wide. These things matter when you’re buying sheets of ply from B&Q. But then there are the other credentials that come from being an ST. If you go for a 220 you get a 3.0 V6 that sounds like sex. The TDCi version is less aurally pleasing, but it can be mapped with ease and will pull 50mpg with ease. Then there is the chassis. The Mk3 Mondeo was a wonderful bit of engineering to begin with, but with the ST’s lowered and slightly stiffer suspension, it’s even better. For a big old car, the handling is superb and also deeply rewarding. You’ll love driving this, trust us.

Because who doesn’t like the idea of telling people they own a Jaaaaag? Right? Jags are cool, and while the X Type does attract attention from people desperate to remind you it’s a Mondeo, it’s still a good car. The Mondeo, as we covered above, was a good car. The X Type being related to that is no bad thing. It’s not like Jaguar paired up with a 1930s truck manufacturer. It was Ford. And Ford knows what it’s doing. As such, the Jag is good. The X Type is also far less fragile than the traditional Jag, meaning it’s a car that you can buy and use without worry. And if it does go wrong, the Ford part sharing means you won’t have to sell one of your many, many children to pay for the repair. Happy days.

In terms of buying one, it’s pretty much a free market, in that the X Type is old enough that even the high-spec models have landed in the waters of the cheap. If you can, the 2.5 V6 AWD in Sport trim is the way to go. The all wheel-drive system will make it a brilliant all-rounder. That said, if you can take the gamble and buy a diesel, the 2.0 is a great bit of a kit and delivers excellent economy while still being refined and powerful. The trick, as with any car, is to get one that has been cared for. Jags thrive when they are looked after, but if they’re neglected they fall apart fast. So, go full history and you should be laughing.

The W211 Mercedes-Benz E Class estate is a car that has featured on the pages of Not £2 Grand in the past, and rightly so, as it’s an astounding bargain. Not only that, it’s fiercely handsome and carries a certain presence that other cars can only dream of. However, you have to buy the right one. You can get one for a grand, but it will have four million miles on the clock, no history and it’ll have a distinct whiff – both figuratively and literally – of minicab about it. The cars are bought for the sake of buying a Mercedes. Bottom of the barrel, neglected wrecks that should be in the scrappers. Don not buy these cars. Instead, shop at the top end of the two grand budget, maybe even a couple of hundred over, and you’ll be laughing.

At that price, you’ll get yourself an Avantgarde estate with all the toys. Engine-wise, the 2.7 diesel is an excellent unit. But if if you want petrol, there will be options. The 2.4 or more than likely the 3.0. Both great petrol choices, though be warned they are thirsty – this is a big car. If you see a manual transmission one, don’t bother. It’s weak and adds nothing to the drive. The 5G Tronic is the way to go. it’s fast, it’s smooth when changing and it adds to the waft-factor. Will your money get you a low mileage car? No, of course not. These cars are always loaded with miles; it’s what they’re built for. But, because it is indeed what they do, you don’t need to be scared by 150,000+ on the clock as long as there is history back it up.

If you want comfort, space, speed, luxury and safety, the car you need is a Volvo V70 estate. Or more specifically, a T5 version with 250bhp care of the turbocharged five-pot 2.3 engine. There are other engines, of course, both petrol and diesel, but it’s the T5 that turns the V70 into a freight train. Literally. Because you can fit the freight of an entire train in the boot, such is its vastness. You could probably live in it. In fact, if you buy one, this is the only car that needs a cursory check for squatters. There could be a family of five living under the spare wheel. There is a lot of space.

Of course, the you don’t have to have a T5. Take the need for speed out of the equation and you’ll have many to choose from. Five-cylinder diesels are good, with lots of torque and 163bhp on tap. Or you could go petrol with a 2.4 turbo with a respectable 200bhp. All are good, solid engines (again, if they have history and have been looked after). The V70 isn’t the most electrifying car to drive, but it shuffles through the bends with reasonable composure for a big car. However, on the day to day, and on the motorway, that’s where the luxury shines through. You’ll be in a cocoon of wood and leather, with climate, electric everything, cruise control and more. Volvos like this stand as a reminder of when the brand pushed into being of luxury, not just safety. Get behind the wheel and you’ll soon see that it is a lot of car for the money.