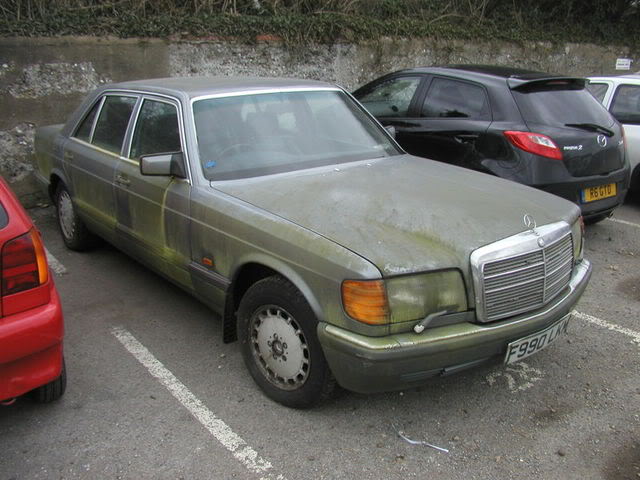 Sorry, my chronology was a little off, as this festering heap of 500SEL belongs somewhere between the Mk2 Capri and the W123 280E in my timeline of automotive embarrassment. When you see it, you’ll soon know why my mind opted to blank it out.

Anyway, some backstory is needed.

I saw an old car on a driveway. I have an unhealthy propensity toward getting transfixed on cars that have been lingering for a prolonged period of time. I had a closer look. I saw it was an S-Class Mercedes-Benz in W126 flavour. The stretched 500SEL version no less.

On seeing it, I made a squeak akin to that of a puppy when you offer it a slice of Spam. I knocked on the door. A man answered. I explained that I was a silly young man who wanted to buy his clearly broken car. He scared me by saying “I have a nominal fee in mind”. Turns out the fee was £100. I bought it there and then. I then went home, sat in dark room, rocked back and forth and had a long, hard think about what I’d done.

Actually, in reality it didn’t look too bad. Maybe it was £100 well spent. Maybe I’d soon be rolling around like some sort of low-budget dictator.

It was even better inside. Full of blue leather and heavy switches along with deep carpet and real wood. It was actually pretty swish. Seriously, the 500SEL was one well-equipped car. None of the buttons could be confirmed as functional without a battery though, which was a concern. Still, it was £100.

Apparently it didn’t run, or at least the seller would make no promises that it would. But, again, for those at the back, it was £100. I wasn’t expecting miracles. I simply arranged to have it recovered to the work car park (hello, employee of the month here) so I could sit in it and make engine noises on my lunch break. I’m easily pleased.

The day it arrived on the back of a recovery truck. Ahh, that day. That’s when reality punched me squarely in the face…

OH SWEET BABY CHEESES, WHAT DID I BUY?!

I was sure I’d bought it from a kindly fellow, complete with big house and block paved driveway, not the bottom of the Thames. Apparently I was wrong. It was thick with moss (see, hence the title of this article), it had a fair bit of rust and it turns out it didn’t run because it had an aftermarket alarm from 1989 – that’s why the bloke said he’d make no promises. If you don’t know cars, alarms of that nature are the embodiment of automotive hell. Even more so when they’re spliced into the wiring of something really complicated like, say, a 500SEL. Oh, and it sucks if there’s also no remote fob. Annoying.

Hmm, not bad actually. Not great, but not bad. When you consider this cost well into five figures when it was new, you can’t really argue with the results. I – well, the bloke from the garage down the road – even bypassed the alarm so I could get it running. Admittedly this was via the crude addition of some wire and the need to have the sidelights turned on (don’t ask), but hey, it was running.

All the electric tomfoolery inside it worked too. Rear blind, rear seats, electric windows, electric steering column, the lot. I was getting excited. Then oxidised metal ruined the party, mainly because it had eaten the party. The party in this metaphor is the car.

Having been sent an email from the boss delicately explaining that “your sh*theap of a fu**ing old car” had outstayed its welcome in the company car park, I bit the bullet and stuck it on eBay. Sold it for £550 too. Enjoy that, readers, it’s about the only time I’ve made a profit on a car.

Turns out the guy only wanted it for the bumper chromes. The rest of car went in the bin. Unless the fuel pump bypass/sidelight ignition ‘solution’ caused it to explode before he managed to pry the shiny stuff out of the bumpers. Meh, not my problem – sold as seen, mate.