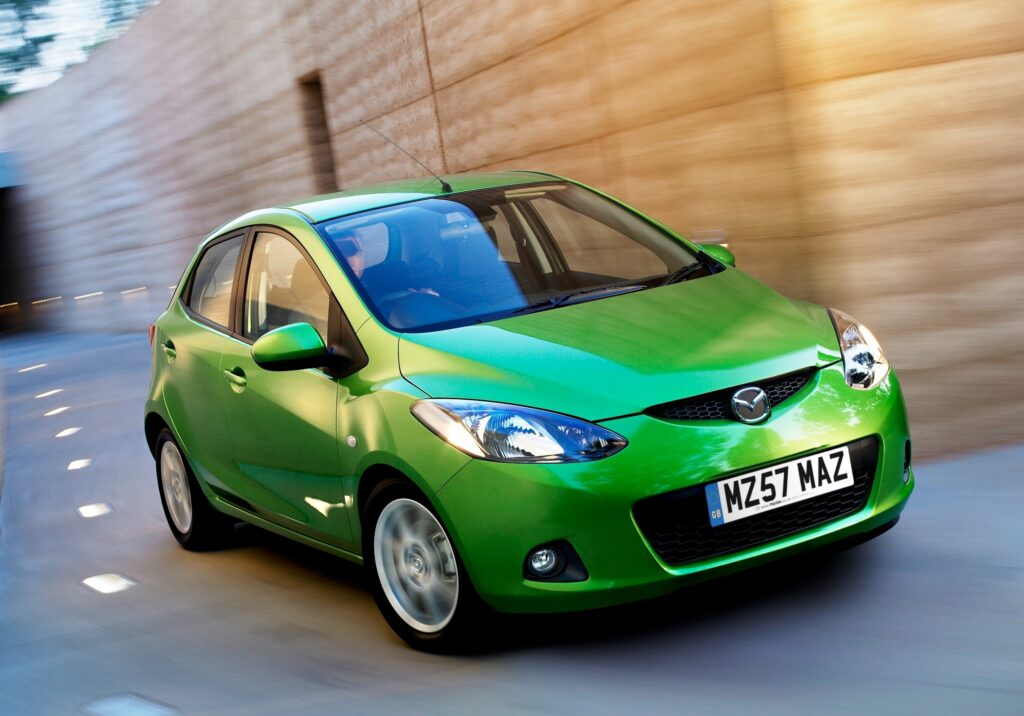 Mention the Mazda 2 and someone will inevitably clear their throat and proclaim it’s ‘just’ a Ford Fiesta. If someone in your immediate vicinity does that, give them a dry slap. First of all, the Ford Fiesta is an excellent car so to be related to it isn’t a case of ‘just’. Instead, it’s a good thing. Then there is the following bit of information. The Mazda 2 is not a Ford Fiesta, nor is the Ford Fiesta a Mazda 2. The Mazda 2 – the third-generation we’re looking at here – used the DE platform. The Ford used the B3 platform. And now, to contradict ourselves, we’re going to tell you this – they’re the same thing. However, this one platform was not made by one and used by the other. Instead, it was a joint effort from Ford and from Mazda. As such, while the platform is the shared, one car isn’t a facsimile of the other. The two companies built the platform together but then went off in their own directions to build the rest of the car. 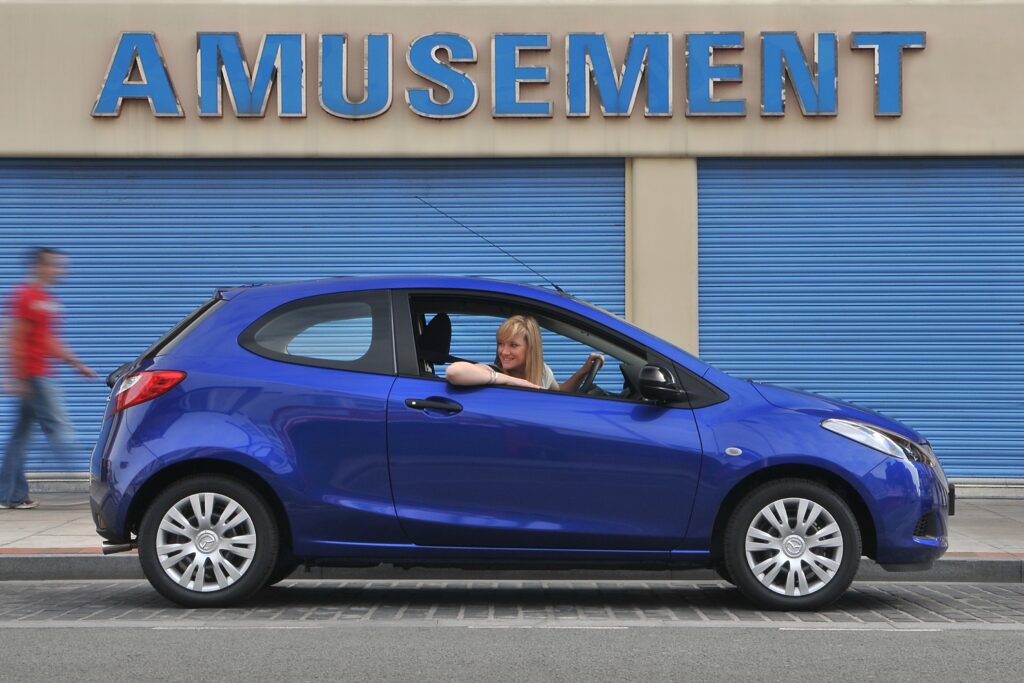 Confused? Put it this way. If you take two slices of bread, put jam on one and ham on the other, they’re different, right? But they are based upon the same thing. Fiesta – jam. Mazda – ham. Or something.

It’s because of this that the Mazda 2 should be judged on its own merits. What it shares with the Fiesta will not be noticed by you or I. Instead, we have to base our opinions of the car upon the tangible, on what we can see, feel and interact with. In the case of the 2, there is a lot of good stuff on the interactions list. It’s a cute little car, it’s well made, it’s comfortable and it’s a joy to drive. Plus, it’s as reliable as Swiss watch and thanks to Mazda building lots of them, it’s now bloody cheap, too. If you must insist on making Fiesta-based comparisons, know this – you get more 2 for your money than you do Fiesta. 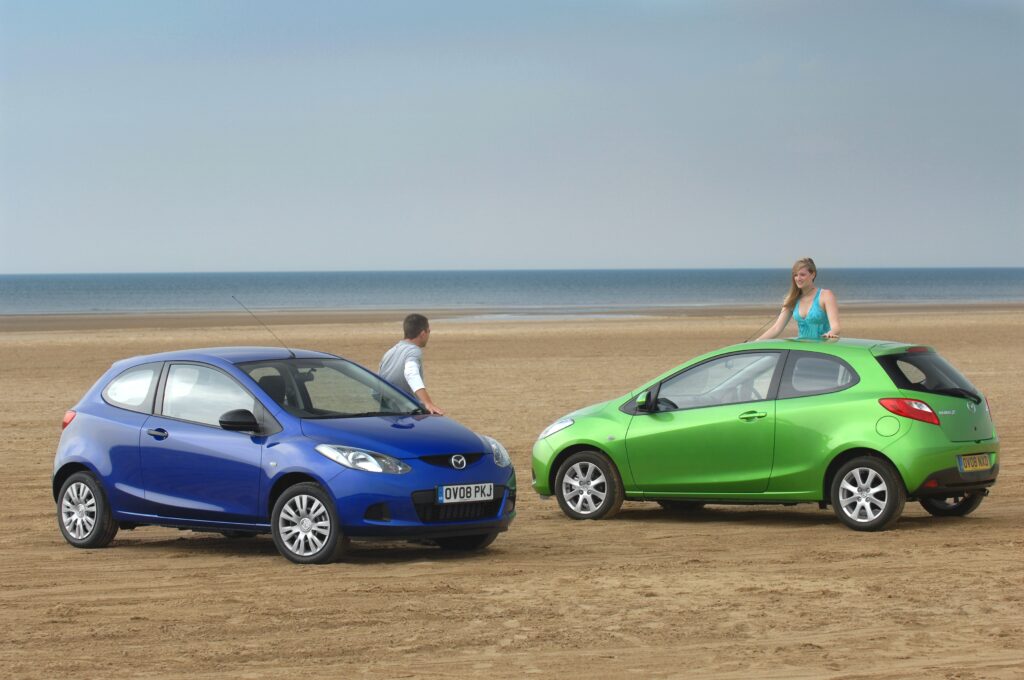 The Mazda 2 wasn’t always the Mazda 2. In fact, it started life as the Demio – you know, the one car you could buy with your 2000cr on Gran Turismo. That one. The one that looked like a toaster. Over the years it evolved and eventually it became the DE, which is what we’re looking at here. There was a DJ version (phat tunes not included) in 2014, which is still in production. Obviously though, that one doesn’t yet land within the murky waters of Not £2 Grand.

The DE is a cracking little car and one well worth your attention. Apart from starring heavily in adverts for LV Insurance, it also found a following thanks to being a reliable and safe little car. And being a Mazda, it was also something a bit different to the norm. The styling was bold but inoffensive, the interiors were well made and comfortable and the engines, especially the 1.5 which we’ll get to later, made the 2 a fun and characterful little car to drive. Like a small terrier. But with wheels. 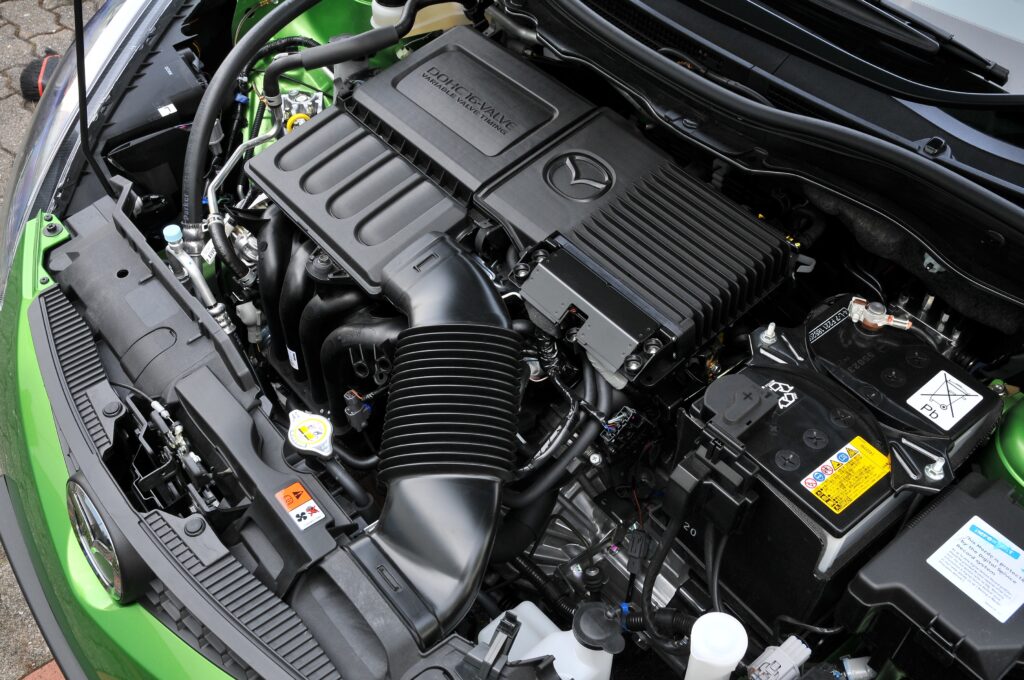 So then, engines. The Mazda 2 was offered with a few, including diesel. However, if you buy a small used diesel in 2021, Extinction Rebellion will come around to your house and throw hemp at you. Environmentalism aside, the 2 really didn’t suit diesel. It’s not a bad engine, with a capacity of 1.6 litres and 94bhp with 152lb ft. But even so, it’s not for us. It’s good, but not so good as to make the petrol choices seem daft. In fact, the petrol choices are anything but daft.

If the ink on your driving licence is still wet, the little 1.3 petrol lump with 74bhp is the way to go. If you want a smidge more grunt, there is a version with 83bhp. However, our money would be on the 1.5 engine with 101bhp. The 1.3 engines are great, but the 1.5 gives the 2 a little more fizz and zip, which we’ve just decided are now terms to be used when talking about cars. Fizz. And. Zip. You want that. it means 0-60 in 10.7s while still getting around 50mpg. Lovely.

As for transmission, you’ll be getting a manual at this price. There was an ‘Activematic’ version, but this seems to be still quite costly. Not that it matters, as the manual is a sharp, tight, snippy ‘box that you’ll love driving with. 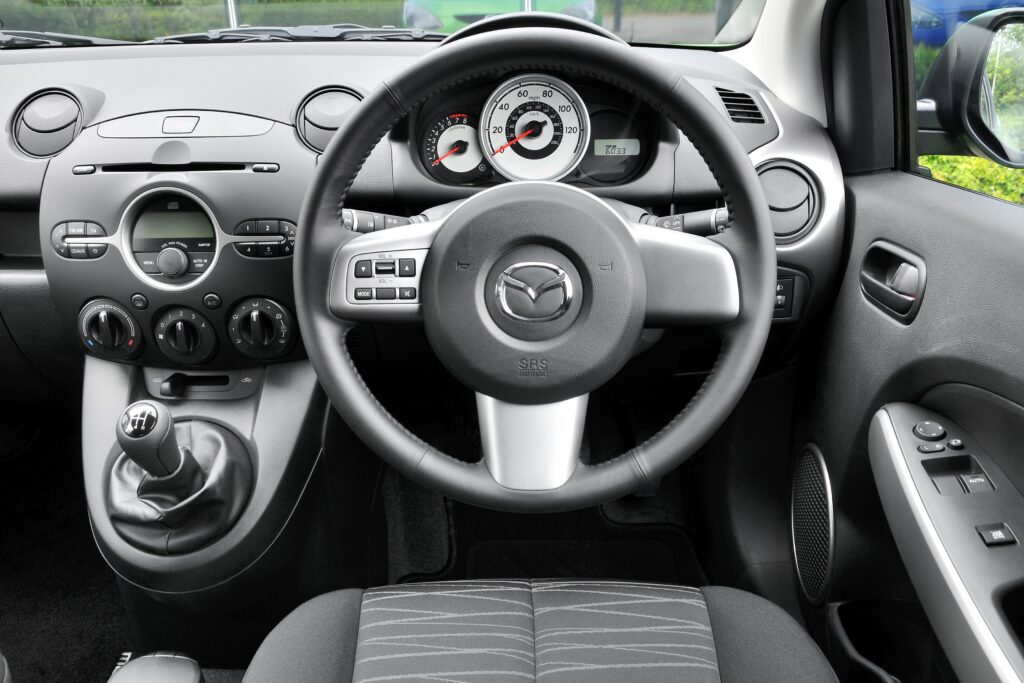 On the road, the 2 is an engaging, fun little machine. The chassis is tight and responsive, the steering well weighting and the brakes perfectly suited. An update in 2010 saw some tweaks to the suspension that made the 2 a bit less molar-smashy on rough roads, which was a welcome change. But no matter what year your DE Mazda 2, you’ll love flinging it about. It’s not going to be your favourite place on the motorway, given its diminutive size, but that’s not to say it cant deal with long haul drives occasionally. It’s better around town, or even on twisty lanes, as it loves to be worked. 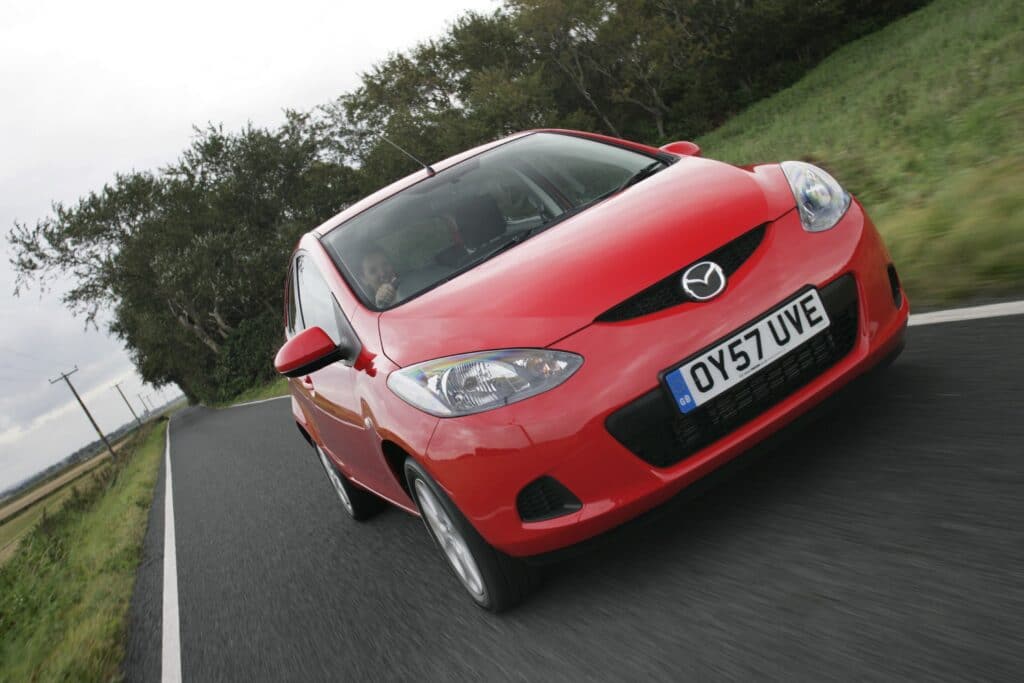 In terms of equipment, you get plenty. There’s a CD player, electric mirrors, height adjustable drivers seat, steering wheel rake adjustment, electric windows and power steering. If it were our money, we’d push for a Sport, which would add climate control, alloys, cruise control, front fogs and heated mirrors. Plus, it’s a nicer range of trim and stuff in the Sport.

And what about safety? As you would expect for a modern Mazda, it’s a five star car in terms of the EuroNCAP crash test results. You get driver and passenger air bags, ABS, Isofix and the shell itself is very strong indeed. If you move up the trim levels to Tamura models and beyond, you’ll get traction control and side airbags, too. It’s small, but it’ll look after you if something goes wrong on the roads. 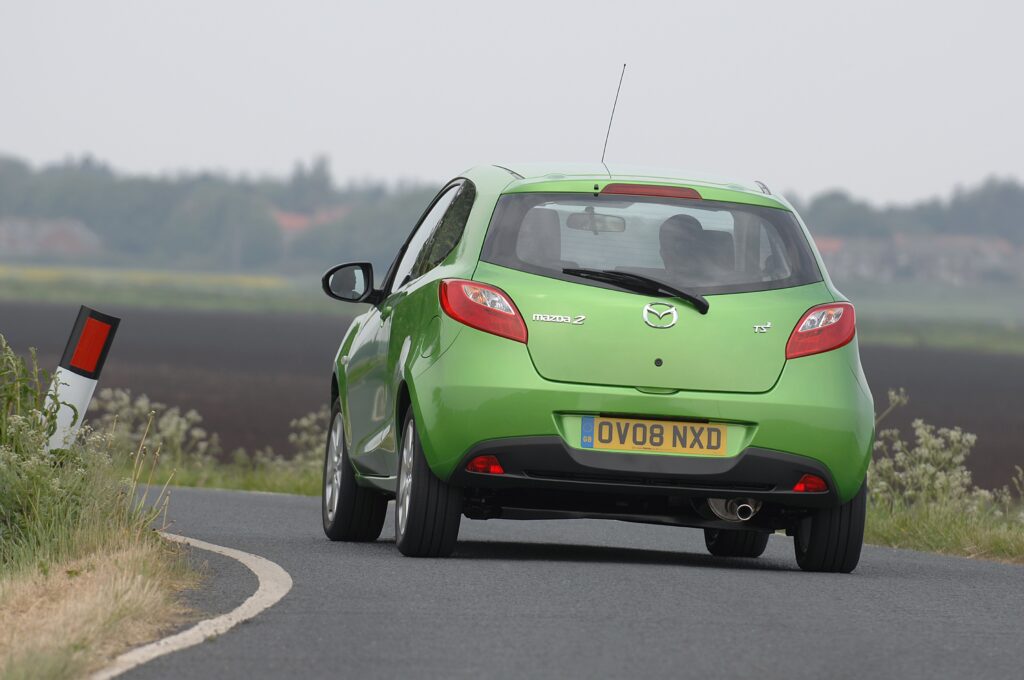 As for reliability, the Mazda 2 is up there. This is a brand with a strong history of making reliable cars (RX-8 notwithstanding) and as such, you can buy with confidence. Just make sure you get one that has been looked after, that has a decent service history and that looks to have been maintained by someone who cares (good types, good oils, that kind of thing) and you should be all set. And then you can take to the road, and trust us when we’ll say that you’ll enjoy it. The Mazda 2 is very much the embodiment of the N2G ethos – it’s modern, it’s fun, it’s safe but it doesn’t cost the earth to buy. Perfect.