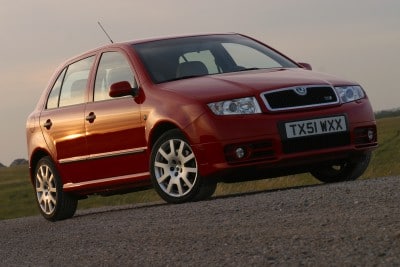 It’s no secret the N2G team are fond of a Skoda. Pollitt was raised by Skoda owning parents (an Estelle and a Favorit, fact fans) while Bevis has employed an Octavia vRS as his current steed. They’re good cars, that’s the bottom line. So good in fact that we’d very much like to bring another one to your attention in the form of *drumroll* THE FABIA vRS!

Yes, it’s a Skoda and much like when we waffled on about the Octavia vRS, we’d encourage you to leave all your Skoda-based jokes by the door. They’re not welcome in here, even if they are wearing shoes and being polite to the bouncer.

Much like its bigger, petrol-engined brother, the Fabia vRS was released at a time when people started to take note of Skoda’s ability to build cars that were not only reliable but also desirable. Yeah, Skoda, desirable. Deal with it.

The year was 2003 and the Skoda Fabia was selling well. Much to the delight of head office, the Fabia was cheekily hustling sales from under VW’s Polo (the very same platform the Fabia was based on) and generally making a good impression. That’s when the men in suits at Skoda HQ decided to do something really crazy: release a hot-hatch version of the very car they had – for the last four years – been marketing to single mothers and ladies called Ethel or Margaret. Those crazy Eastern Europeans! Not only that, they decided it’d be a diesel, too.

You’d think based upon the success of the Octavia, the bods with Auto-Cad and white coats might have opted to follow suit and employ a petrol engine with a turbo of some sort to power the ‘hot’ Fabia. However, they did no such thing. Nope, they stuck to their crazy guns and employed a diesel engine, y’know, like what taxis, buses and locomotives have.

They weren’t mad. They were, in fact, inspired! A 1.9 ‘Pumpe-Düse’ common rail diesel lump was stolen from the VW parts bin, it was treated to some shiny bits and then via witchcraft and magic they forced it to kick out 130bhp and 230lbft of torque. That’s a lot. It’s a hell of a lot when you consider 55mpg was a very real…urm…reality. Oh, they also bolted a six-speed cog-swapper to it as well, just, well, BECAUSE SHUT UP, THAT’S WHY!

The Skodites – that’s what we’re calling Skoda employees now – weren’t content with just power from an unusual source, though. Nor were they satisfied with draping the angular lines of the Fabia in vents, wings, spoilers and badges. Nope, they were not going to stop until they went utterly bananas inside! There was leather, seats of a buckety persuasion and more. Just look at at it, a brand which once provided so many ’80s stand-up comedians with material now boasts a car that has innards nicer than our house. Skoda, you did this one right.

And now you can have one of these amazing, fun, surprising little cars for less than the hallowed figure of £2000. You’ll get speed, you’ll get economy and you’ll get funny looks from fellow motorists when you pull up to the derv pump. Most importantly of all, though, you’ll get one of the most game-changing cars of Skoda’s history, and you’ll love every minute of it.