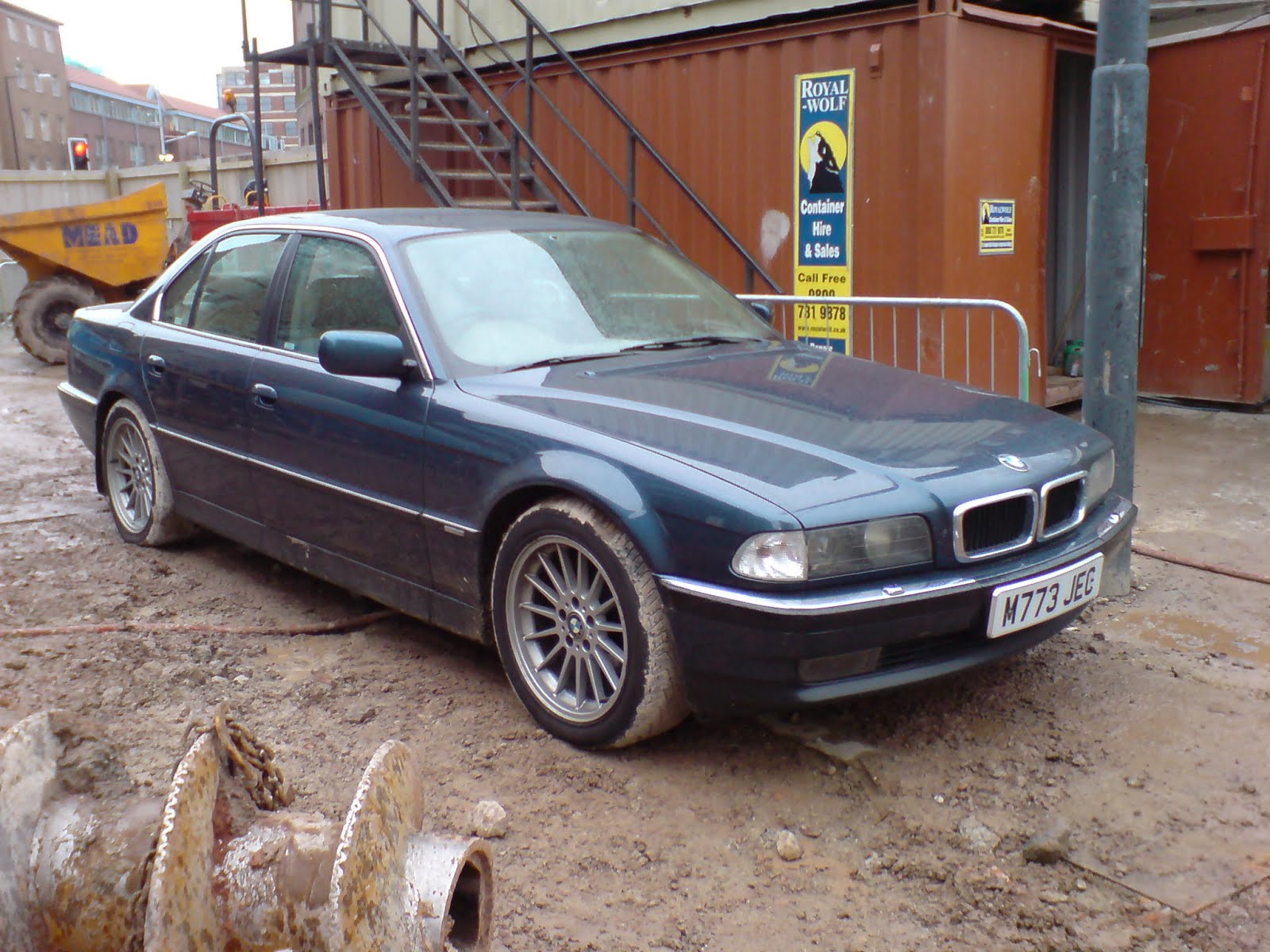 I owned this E38 730i for a week. It was an ill-advised, poorly thought out, financially wasteful move on my part… and I loved it. Until day five. At which point I didn’t love it. Not one bit.

As I recall (insert wavy lines and harp music) I had this between the Rover 800 and the Calibra, I think. It was a long time ago. It was definitely around then though, because I bought it as part of my quest to stretch the term ‘sensible family car’ as far as possible. In my then 23 year-old brain, a 3.0 V8 executive saloon was the vehicle of choice for a family expecting a baby. Plus it looked well gangsta’, which of course, I am.

You’d hope that I’d have elected for a purchasing process consisting of finding suitable cars, weighing up their respective pros and cons, test drives, so on and so forth. You know, like a sensible human being would have done. Well, hope all you want, it won’t change the fact I bought the first E38 730 I saw on AutoTrader.

Not a bad-looking motor by all accounts. It had the big rims, the crystal lights, it was de-badged and it was stuffed with a 3.0 V8. All came undone rather quickly though, as I’ll now explain.

I bought this E38 730 from a kindly old fella. That put my mind at ease somewhat, as a snotty youth would have no-doubt left me to think the engine was going to fall out due to abuse and overenthusiastic revving. I didn’t want that. I wanted wafty smoothness. From the car, not from the old man.

As I recall, the car belonged to the son of the old boy. He’d moved away so asked his Dad to sell it. It looked okay and the bloke seemed honest enough. The car seemed to work. I filled in some paperwork, handed over £1,500 then went on my way.

First thing I spot is the car’s lack of fuel, so I popped into the nearest Esso to remedy the situation. This is where it all started to go wrong. I locked the car using the remote fob – why wouldn’t I? – and went to pay. Came back, unlocked car, got in, turned the key and… nothing. Not a beep, click, clunk, whistle or whir. Dead car. Panicking, I rang the seller who was all of a sudden not answering his phone. Funny that.

After pushing it off the pump (the BMW E38 730 is heavy, as it happens) I sat and pondered the implications of phoning the wife and telling her what I’d done. Then I pondered the resultant physical injuries and decided against any kind of confession. Instead I turned the key and boom, running car.

Turns out it had an electrical fault that locked the car down for 30 minutes every time it was zapped with the remote. Annoying.

Fairly uneventful. Drove it a bit. Felt like Billy-big-bollocks because I was 23 with a E38 730i. Washed it. Talked to the neighbours about it every time I arrived home, despite the fact they had no interest in the car or me.

I attempted some automotive heroics on a wet roundabout, too. You know, because it’s really clever to try and slide a two-ton, automatic car when you’re blessed with the driving talent of Mr. Bean. Luckily it was late and the roads were quiet, so my 180 degree pirouette was a spectacle for me and me alone. I never did it again.

A bloke I was working with noticed something. “Ere, mate, your car is pissing out fuel”.

Annoying, but it did explain the abysmal fuel economy. I just thought it was a really thirsty V8, when in reality it was because I was unknowingly to recreate Back To The Future by leaving behind a trail of fire. But for me it would be courtesy of unexpectedly ejected fuel. Not time travel.

This isn’t me. It’s James Bond with a much better E38. Just in case you didn’t know.

I took it to a BMW specialist to find out what the hell was wrong. Once the guy had finished shouting at me for leaving an ocean of unleaded on his workshop floor (though I have no idea why. I told him what it was doing but he still insisted I drive it in) he explained the problem, and do you know what? It wasn’t all that bad.

“Needs a couple of hoses for the tank mate, nothing major. They’re about £6 each, plus the vat.”

Stupid car. Not willing to commit to a circa £500 repair there and then, I hopped back in my mobile fire hazard and headed home. Once there I did the only sensible thing I could and listed it on eBay. Three hours later the £1,500 ‘buy it now’ button had been pushed. Car sold. Sigh of relief enjoyed.

Again, not mine. Though I wish it was.

A happy man from Liverpool was the winning bidder. And before the ‘moral police’ turn up, I told him about the fault which he assured me he could fix*.

Cash changed hands for keys. He drove off into the sunset. There were no explosions. I never heard from him again. Not a bad result really, all things considered. And with money in my pocket I opted buy a sensible car. A Vauxhall Vectra. Though I’ll get to that in a bit, as there is a splash of other motoring misfortune to tell you all about first.

*checked the car’s details online a few months later. Missing (SORN), presumed dead. That’s the end of that then.