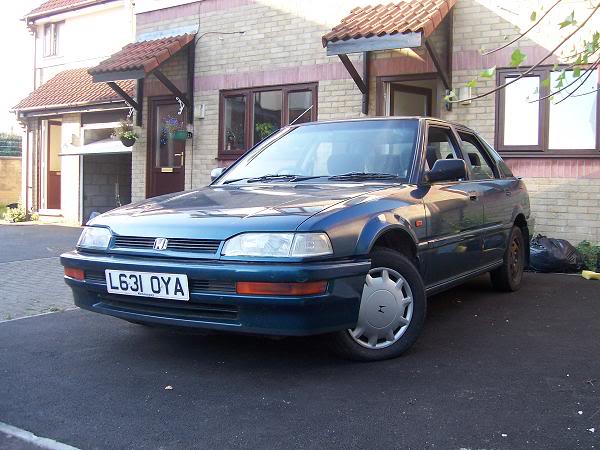 I was working in a garage* at the time. I hated it. It was one of those places that dealt with imported cars from Japan, though not particularly well I hasten to add. It was all radio frequency expanders, kph to mph with a few miles left off for good measure (and a higher screen price) and a LOT of Mazda Bongo Friendees. Stupidly named, though pleasantly practical vehicle. I also had to deal with a cretin who was allegedly the manager of the parts department, though in all honestly he couldn’t manage his arse form his elbow. But anyway, I digress.

One day, while waiting for the clock to strike five or for the sweet embrace of death to unexpectedly grab me as it rode the boredom train, I was confronted by a harassed-looking man in a suit he’d clearly paid a lot for, though it was some three sizes wayward of where it needed to be. His hair was slicked, his Nokia was glued to his face and he wore the sickly smile of a man who was after something.

Turns out he wanted to give me a car. Well, not me specifically, but as I was first point of contact I was also the winner. My Prize? A 1993 Honda Concerto! I know, snazzy right?

Turned out an old fella had died (not in the Honda) and had no family or last will and testament. Suit-man was clearing the estate. Honda featured in estate. Honda was opposite my garage-based workplace. Garage means cars. Cars go to garages. Suit-man enters garage, Suit-man offloads Honda onto me. Job jobbed.

It came with V5 and old MOT, it had extremely low mileage and on the whole, it was tidy bar some slight panel damage which popped out easily enough. I cleaned it up, hoovered out the crumbs and hard boiled sweets and sold it. £217 I think. Not bad for nowt.

A hand-me-down from my then Mother-in-law, the Escort was a trusty steed. And a rusty steed, too.

Not much to report on this one. It was free, it wanted for nothing other than fuel (I’m sure it craved other fluids, but it was kind enough to keep those desires to itself) and it never let me down. Good work, Escort.

It will always carry a special place in my heart as it was the car I delivered a very pregnant mother-of-my-child to the hospital in. Impressive, considering just days before I had it (accidentally) airborne over a country lane in a bid to, and I quote, “get this bloody baby out of me”. I didn’t mean to launch (no pun intended) my own budget airline, I merely underestimated a hump-back bridge. A hot curry, lots of water and a bumpy ride in a knackered Escort all failed to motivate my daughter to abandon ship. So when she did opt to leave of her own accord a few days later, I was glad of the Escort’s willingness to function.

I can’t actually remember what happened to it. I think we gave it back to the Mother-in-law.

I’m an idiot. I bought this for no other reason than because I saw it parked on a driveway looking abandoned. That’s normally enough visual incentive for me to go waving fistfuls of money around all willy nilly. Which I did, to the tune of £400 in this case.

I already had an E38 730i at the time (I’ll cover that during the next update), so it seemed only logical to buy another. Though little did I know how catastrophic this second slab of German upper-management motoring would be.

It came from a house quite literally around the corner. Walking distance in fact. It had obviously been laid up for some time, but despite this, the miserable git who answered the door upon being disturbed by my enthusiastic knocking didn’t want to sell. His wife, however, did. So £400 later (after I swore to the wife that it would be “a solid investment” and “we’ll make double our money back”) and with the disgruntled exchange of keys, I was the proud owner.

I felt like Jason Statham in The Transporter, behind the wheel of my black 730i. The fact mine was an auto and riddled with a smell akin to something that had given up being a live some time ago didn’t dampen my enthusiasm.

It took a jump-start from a Land Rover to bark the Beemer into life after its long slumber. Being the astute young fella I was, leaving the car on the driveway to tick over seemed like a good idea. You know, to charge the battery?

I was in the kitchen when I heard the wince-inducing noise of metal rubbing its shiny face all over other metal. The bastard thing had decided to do some remodelling via the addition of a large hole within the engine block. Holes aren’t meant to go there.

A wash of panic swept over me. My wife was a fighty lady and would most certainly remove parts of my anatomy upon learning I’d spent £400 we didn’t have on a car with a slightly more ‘open’ engine than required. Still in that panic, I walked back to the house from whence the car came, though I have no idea why. Previous owner bloke seemed less than interested, and rightly so. Sold as seen and all that. His wife, however, stuffed £400 in my hand and told me to “get rid of that damn car”. So I did. To a BMW breaker. For £300.

Every cloud and that.

I seem to have taken this picture with a calculator. Sorry about that.