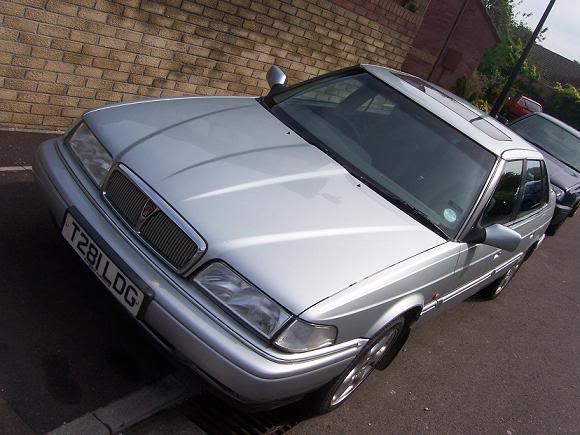 Well, what a stupid bloody idea this Vitesse was. I have nobody to blame other than myself. I had some money in my pocket and I got all excited, so I went out and bought it. But why not, I mean, what could possibly go wrong when buying a car famed for being terrible, from a dealer 500 miles away, without having first seen the car other than in pixilated form thanks to more eBay bidding silliness?

Nothing, that’s what. Come on, just look at it. It’s a beauty, right?

The Vitesse seemed like a good idea at the time. It was big and its T-Series 2.0 turbocharged engine promised to be fast. I’d always liked the look of them, so, yeah, job’s a good’un. The fact it was in Sheffield was a bit of an issue considering I’m in Bristol, but it was nothing that couldn’t be overcome thanks to thetrainline.com.

Several hours of clackety-clacks later and I was there. Forty-five minutes later the paperwork had been signed, the car had been collected and I was on my way back to Bristol, via Manchester, buzzing over the M62 all while enjoying lif… oh, it’s overheating terribly. Feck.

I somehow managed to limp it to Manchester without welding piston to cylinder wall, where I was able to observe my new car’s party trick. This…

Yeah, that lot should be staying in the car

Now before you question why I didn’t just take the Vitesse back and get my money, there are two things I should explain:

2) Trade sale, so it was sold as seen. No warranty given or implied. I know, I’m an idiot.

Anyway, after me and a pal looked at it, filled it water, tightened some clips and applied a share-value-increasing amount of PTFE tape, I hit the road for Bristol. Thankfully boost and speed were plentiful, the a/c was cold, the seats were comfy and with that, 185 miles were happily devoured by my Cowley steed.

The next day I was more than excited to hop in my new ride (by this point it was the newest car I’d ever owned with its ’99 T registration) and show it off. The Vitesse, however, had other ideas. Leaky, deathly, broken ideas.

Turning the key did indeed bark the 2.0 twin-cam engine into life. But only for a moment. No application of throttle, no pleading nor any long stares at the engine seemed to have any bearing on the car’s willingness to live. As you can imagine, I was less than happy by this point, though that was nothing compared to the blonde, walking embodiment of rage that was my wife at the time (hint: it was her money).

Not one to be defeated, I assured the wife that it was nothing major and that my chums at work would be able to fix it. I hastily arranged recovery and had it shipped to the garage that employed me, so the techs could have a look at it and fix it for me. Bonus point, it was an ex-Rover garage. All would be well soon, I was sure of it.

With cars like this, it’s no wonder Rover went belly up

Turns out that when you’re not paying them, technicians take their time. So much so in this case that I actually went out and bought another car in the form of a (this is NOT sarcasm) lovely Vauxhall Calibra. I’ll get onto that one in the next update.

Several months later, a job was cancelled and the boys were bored, so my car was wheeled into the workshop for analysis. The analysis came back clear as a bell: it was fu**ed. Brilliant news!

Still, a dead car is worth nothing so I opted to bite the bullet and get it fixed. The Calibra was doing me a fine service, so I had no desire to drive the Vitesse ever again if I could help it. The plan was to simply fix it, then flog it to the next unsuspecti… *cough* happy motorist.

The list of parts needed came across like a who’s who of all time mechanical favourites from Longbridge. Water pump, head gasket, oil pump, turbo seals, cam belt, cam kit, rocker cover gasket, bottom hose, top hose, intercooler… IT NEEDED THEM ALL. But, I was only paying for the parts, so why the hell not?

Car done, I finished work and jumped into the half leather Recaro seat – which was a stranger to my buttocks by this point – and fired up the engine. All was well, in fact, one of the techs had an old induction kit laying around which he fitted, so I now had added ‘churb’ and ‘burb’ upon accelerating. Win.

On the way home I thought I’d take it for a meander around the Somerset hills, just for old time’s sake and to at least get some enjoyment out of it. It was my car after all, so why not?

As I crested the the twisty road that ribbons over Portbury all was glorious. Until, that is, it blew the head gasket again. Hot water, coolant, rage, the tears of a fat man from Manchester and sadness all collected in a growing pool on the floor, only to shimmer the shimmer of oil-contaminated water as it dripped into the nearby drain. There’s probably some sort of metaphor in there, but I can’t be arsed to find it.

More than a little defeated, I limped the car home and stuck it in the corner of the drive reserved for failures. Previous habitants included the W123 coupe and the Capri.

I explained to the wife, tail between my legs, that the car was dead and as it owed us over £1100 already it probably wasn’t worth putting any more money into. She agreed, then shouted at me, then made me leave the house for a bit so as to avoid me becoming a headline on the front page of the Bristol Post.

In the end the car sat there festering for a few months more. Looking back, I owned it for seven months but it only actually functioned for seven days. What a wonderful car.

I sold it to some banger racers for £200 and laughed the laugh of 1960s B-Movie villain as it went. Hateful car. Yet, curiously, not the last Rover I’d own. Not by a long shot.