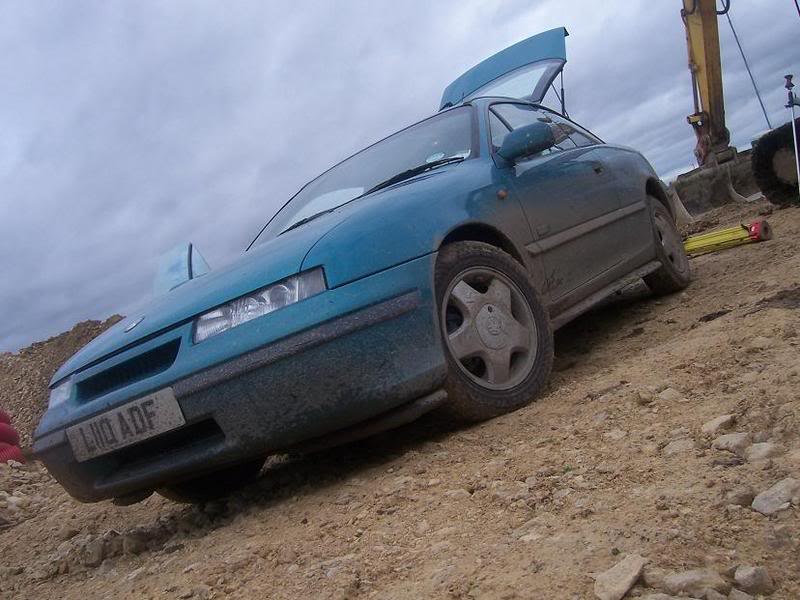 I’ll start by saying that I’m including this car purely for consistency. Not a lot happened with it to be honest, it was just a green Calibra.

I did get it for a bargain price though, a mere £250 in fact. An old boy was selling it cheap as the MOT was short and it wouldn’t idle properly. Because I was well clever and stuff, I knew that it was the idle control valve (I wasn’t well clever, I asked a bloke I worked with), which was no big deal.

I paid the money, limped it home, cleaned the ICV and bingo, one happy Calibra and one happy Pollitt. Rightly so, thanks in no small part to it being rather presentable, if very green. Low miles too, as well as a total closure alarm which made funny noises. The exhaust made funny noises too, due to the fact the backbox fell off on the drive home. Meh, you pay £250, you take your chances.

I should imagine one or two of you are all like “Brah, that’s like well not a 16V. Why bother?”. Well, firstly, if ‘brah’ is in your vocabulary, stop it. You sound silly. Second, I didn’t need POWAAAAHHHH, I just needed it to work. Which it did.

Looking back, it was actually faultless despite the slightly obnoxious noise it made thanks to its absent rear-most exhaust section. It never let me down, it was good on fuel, it had loads of space and shockingly for an SE2 Calibra from 1993, it had no rust at all. It was quite the beauty in retrospect. I even bought a decent CD player for it so I could enjoy many a PUMPIN’ BASS RIDDUM. Or, in reality, Dire Straits.

So yeah, sorry, pretty boring. But in the name of consistency it has to be here otherwise I’d be a dirty liar, and nobody wants that.

I didn’t own it for long. We needed a bigger car, so I bought a Vectra diesel estate (which has more of a story to it than a Calibra, worryingly) instead. The couple who bought it from me seemed happy enough, and I made a nice profit too. Everyone’s a winner.

Oh, and it was stolen and used in a brilliantly unsuccessful ram-raid shortly after. Seems the curse of my ownership can linger even after my name has been struck from the V5. Sorry car.