Some years ago, we wrote about the Chrysler Crossfire. Not only was this highly amusing because sent owners into a frothy rage (seriously, have you been on this site before?), it was also a golden opportunity then do a post about the Mercedes-Benz SLK, the car on which the Crossfire is based. The better, original car. Not the flabby American suit that Chrysler put on top of it. Presumably though, we were distracted by something shiny or maybe something on the TV, and as such, we never did that post. UNTIL NOW. Four years later. Ahem. Anyway, moving on…

We’re not going to mention the other car from now on. We have already given it enough space on this site. Instead, let’s talk about the virtues of the magnificent SLK, of which there are many. For clarity, and for budgetary reasons, we’re looking here at the pre-facelift R170 version. The OG SLK, if you will. Mainly because this is the only one you can get for this kind of money, and also because it’s the one we like the most.

The SLK was first released as a concept in in the mid ’90s. The SLK I, and then SLK II were well received, but also quickly forgotten, as there was no way Mercedes-Benz would ever build such a thing, right? Well, it did and at the 1996 Turin Motor Show, the car in production guise was unveiled. Refreshingly, it has some serious concept car energy. Michael Mauer and Murat Günak did an amazing job of bringing the concept’s lines and style through to production. Which of course, meant the SLK looked like nothing else on the market. 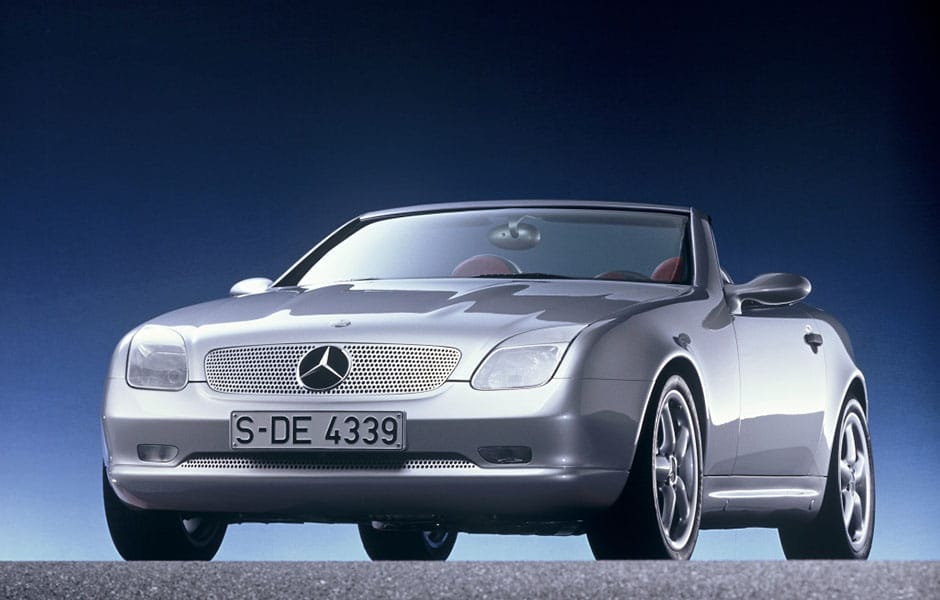 Mercedes-Benz wanted in on the booming roadster market. Filled with cars like the MX-5, the MG F, the Barchetta and myriad others, bosses at Benz decided it was time to offer a premium roadster. Not least because it knew BMW and Audi would soon be coming to play with cars like the Z3 and TT. And let’s not forget the Porsche Boxster, either. It wasn’t a slice of the market the three-pointed star could afford to miss out on. As such, a great deal of thought was put into the design of the SLK. It boasted exceptional build quality, as you might expect. It was also an absolute joy to drive thanks to being based on a shortened C Classic chassis. The roof was clever, being a folding ‘vario-roof’ hard top that went from up to down in just 25 seconds. It was just a good, good car.

It was also loaded with kit. You got power steering, ABS, traction control, cruise control, electric mirrors, heated mirrors, driver and passenger airbag, remote central locking, side airbags and traction control. You could have it filled with leather, too. And you could even have optional air-conditioning, heated seats and headlight washers. It was a very full, very well specified small roadster. And it was even safe, too. EuroNCAP gave it four stars – incredible for a traditionally floppy roadster. It’s not hard to see why they are still popular today, nearly twenty-five years on. 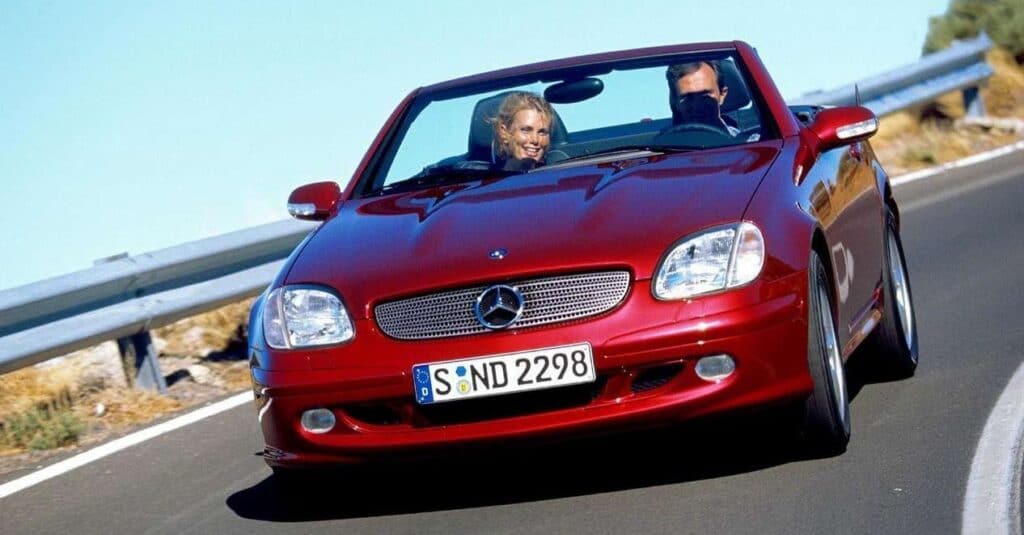 The SLK was offered with an impressive range of engines from a 2.0 naturally aspirated straight-four through to a 3.2 V6 with a supercharger. Don’t get too excited, though, as the V6 with the blower isn’t going to be a cheap car. However, your budget will get you a silky smooth V6 model sans supercharger. If you like your induction to be forced, there is a 2.0 with a supercharger, or a 2.3. All the engines are great, and are pretty much bulletproof. Though only if they’re looked after. There is no shortage of used SLKs out there, so avoid cars with no or patchy history. You need to know that the supercharger (if it has one) has been serviced, you need to know if belts, pumps and fluids have been changed. These engines are good, but only if looked after.

Transmission wise, the SLK came with a five-speed manual up until 2001 when a six-speed replaced it. However, in true Mercedes-Benz fashion, the manual is best avoided. Go for an automatic. The SLK isn’t a car that needs a manual to complete the driving experience. In fact, the clunky, unrefined nature of it means it will hamper the drive. Let an auto take the strain. Especially is you’re a tall person, as you’ll be thankful for the extra foot/leg space on long drives. 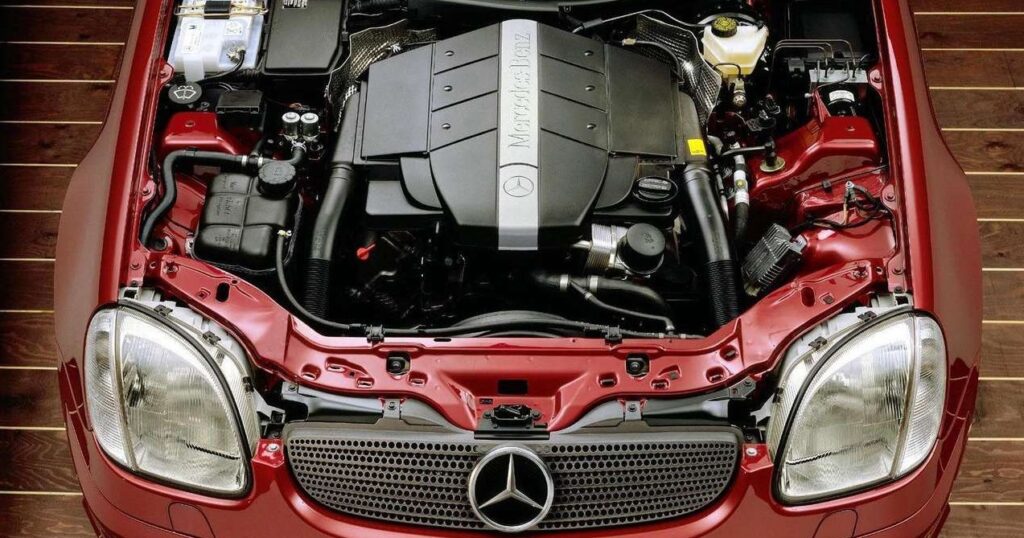 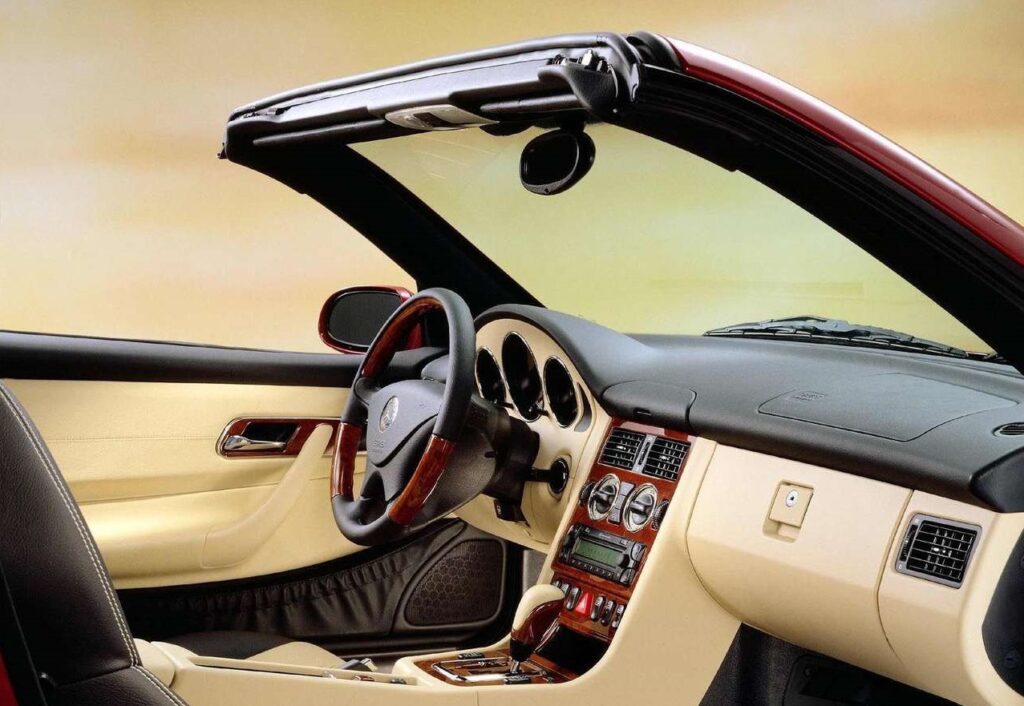 Things to look for? There’s the history, as we mentioned. The service interval on some models is 9000 miles, and that needs to be adhered to. If not, it could mean your supercharger is on borrowed time. They need clean oil. Rust can be an issue, in particular behind the front wings and the rear subframe. A look at any prospective car’s MOT history is a must. Just tap the registration into the DVLA website and have a look. Check the roof too, as in the operation. It might be a bit slower given age, but certainly no slower than 30 seconds. Check the seals, too, and look for any signs of damp in the car.

Also, you need to be aware of the roof and where it goes. There isn’t a black hole to a roof-storing dimension back there, meaning when it’s down, you’ve got no boot space. And there wasn’t a lot to start with. If you want the wind in your hair, you can’t do it on the way back from the supermarket. Just a heads up, there.

Other than that, it’s just a case of using your head and not buying a dog. As we said, there are plenty for sale. Avoid modified cars, avoid cars with battered interiors as this suggests poor care elsewhere. Just shop about, take your time and you’ll find the right one. They’re out there. 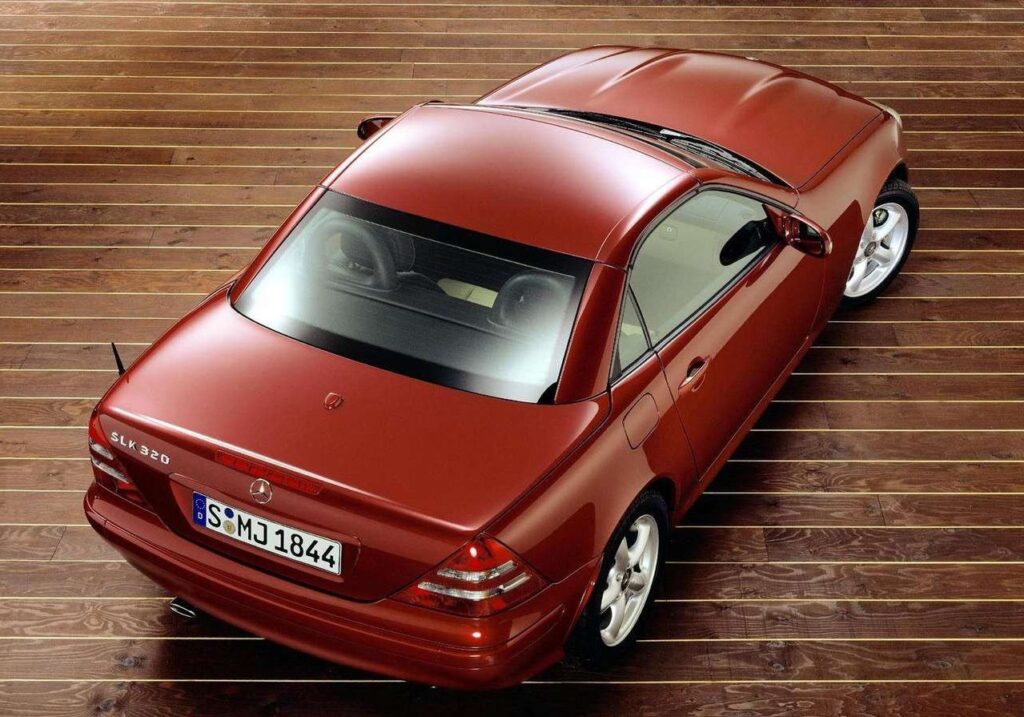 The Mercedes-Benz SLK is a brilliant little roadster. If it were our money, we’d be after a 2.3 Kompressor with an automatic transmission, silver with black leather (cloth is best avoided as it doesn’t suit the car). It’s a fun, light, agile, refined, comfortable machine that stands today as one of the best modern classics you can buy. It still cuts a dash, and a clean, cared for one will still look good in the company of more modern offerings. Mercedes-Benz really did get it right with this. Buy one, you won’t regret it.