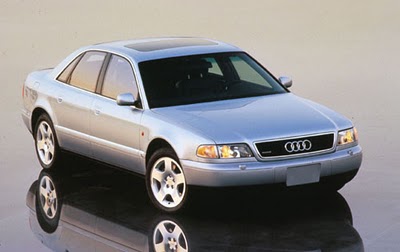 German. Aluminium. Fast. And you’ll have to sell a child if it breaks down. Focus on the first three points.

Seen Ronin? If not, why the hell not, eh? If you have you’ll already know where this is going. If you haven’t worry not, it basically shows a large American man using an Audi A8 (well, technically speaking it’s an S8) to hunt down some surly Frenchmen and ram both them and their Peugeot 605s off the road. In a nutshell it means the Audi A8 is awesome, and as such you need to own one.

“ZUT ALORS, LE AUDI UN LE PAMPLEMOUSSE!” Is what they were saying in the Peugeot, maybe.

Yes, you too could smash professionally suspicious Frenchmen off the road in your very own Audi A8, for less than £2000. However, we suggest you just buy one and drive it, as crashing into the good people of France might get you into trouble. Plus, while you can indeed buy an A8 for under £2000, we suspect costs may exceed that if you keep slamming into French vehicles. Take note.

Here’s one we found on www.autotrader.co.uk to show you that we are not lying, and that our pants are most definitely not on fire…

…and that wasn’t the only the one, in fact there were loads to choose from within our hypothetical budget. Even we would steer clear of the £1500, 200,000 miles cars though. They’re a bit past it. Hit the magic £2k though and you could be rolling in four-wheel-drive, V8 propelled, leather-shod luxury. People would think you were a leader of industry (in 1998) and that you have your own secretary called Susan who revels in telling people you’re going to Macclesfield for a “very important meeting” so they’ll have to ring you on the car-phone, and lets face it, we all want people to think of us like that. Do bear in mind though, that if you buy a black one nothing we’ve said is appropriate. People will just think you sell drugs, but hey, that might be the image you’re going for.

The A8 was, and still is the flagship car for Audi and Jason Statham. They’ve been occupying ‘Managing Director’ parking spaces across the globe since 1994, and now you can own one, you lucky bastards!

This is where your bottom would go, along with the rest of you presumably

It combined luxury of the highest level with kick-ass performance. The 4.2 V8 in this car kicked out 295bhp which is enough to make your bottom flinch upon heavily depressing the gas pedal. It was also made from aluminium, or alooominum as the Yanks call it. This meant it weighed about as much as Paris Hilton’s brain, giving that 295bhp less mass to move and in the process, adding to the speed. It also meant the bugger wouldn’t rust. Leather sports seats hugged the driver while a semi-automatic gearbox took care of dishing out the power to all four wheels. Audi had nothing like this before, apart from the A6 which was much smaller. When the A8 hit the showrooms it had BMW and Mercedes worried, and rightly so.

Brand new the A8 would have been over £50k, primarily because it was full of leather, aluminium, electric things and truffles (the last one may be a lie). Now though, you can pick them up for peanuts. It’s a fate that all big, executive cars suffer and it has nothing to do with their quality. It’s just a big car thing – they start off pricey and then end up being dirt cheap, fine by us.

Yes, it’s huge, it’ll cost you a small fortune if it breaks, you’ll achieve around 4mpg if you have a heavy right foot and if you buy a black one, people will think you have a boot full of heroin. If however, you dig about and get one with some history that’s been looked after you’ll be laughing. And most importantly of all you’ll feel like a king every time you slip into it, even if you are only popping to ASDA for a Pot Noodle and a four-pack of Carling.

Not £2 Grand Shop is NOW OPEN!

Three American Cars You Can Buy for N2G Money…