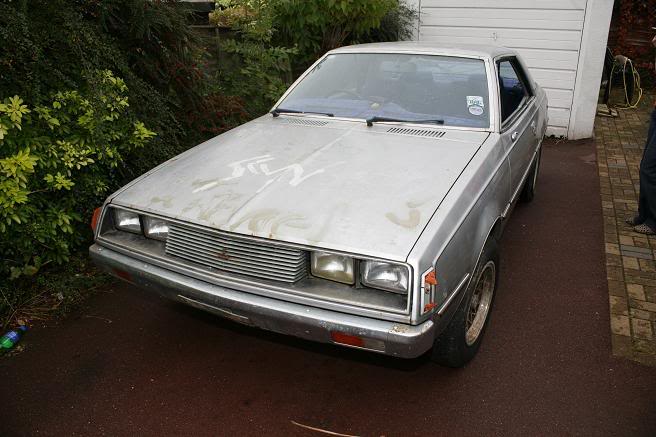 This Sapporo came about as a direct result of being in the right place at the right time, or to be more accurate, being a nerdy nerd on the right forum at the right time. Bizarrely, as memory serves, it was a Ford-based forum, too. Odd. Anyway, that’s not important.

What is important is that in a roundabout way, via a chain of people I’d only ‘met’ on MSN Messenger (remember that?), I ended up with this rather handsome and somewhat rare slice of Japanese automobile. And, for reasons I still to this day cannot fathom, I got it for free. Like I said: right place, right time.

That’s how it arrived, and it was wondrous. By which I mean it was anything but, mainly because it was full of spiders and a smell akin to that of a broken fridge left in the sun for seven years. It was… unpleasant. Still, it was free so I had no right to complain.

If you would indulge me, I’ll offer you some backstory to this particular Sapporo. If you could do the ‘wavy lines TV dream’ thing, that’d be super.

Right, in your dreamy state? Then I’ll begin.

A man bought it when it was new. He used it a bit, then he stopped using it. Then he put it in a garage. Then eleven years later the garage fell down. Then some children threw rocks at it. Then I spoke to him. Then I ended up with it.

Sorry, that was hardly worth the effort of the wavy line thing. Still, it’s about getting involved in a story, so well done if you did. If you feel silly, stop it and lighten up. Life’s too short.

Anyway, yes, the car. It had some faults…

The screen was smashed, the indicators were smashed and it seemed to be holding onto a lot of oxidised metal. The latter point didn’t really bother me, the former two, however, did. You don’t just call Autoglass and order a screen for one of these. Nor do you pop into a motor factors for a new set of indicator glass. Unobtainium, big time.

I had a bit of breathing room before needing to worry about such things. Firstly, I had to see if the car was worth saving. After all, it had been laid up for just over a decade. Its engine block could have become one locked-up hunk of rusty metal. It might have exploded at the mere mention of being introduced to an electric current. And furthermore, on a car so rare, it was probably hiding more bits and bobs that could only be found on a shelf next to the faecal matter of a rocking horse and the molars of a hen.

Before the fear set in and I ended up being reduced to a mumbling mess, rocking back and forth in my garage while holding a Mitsubishi key and a 13mm spanner, I decided to try and cheer myself up by identifying some good qualities.

Huzzah! It had good qualities. The interior first and foremost was completely and utterly mint. As memory serves the car only had 20-somthing-thousand miles on it, so its innards were bound to be good. However, they weren’t good, they were like new. Literally. Not literally in the sense that kids say “like, OMG, I LITERALLY DIED”. No, it was factory fresh. Mainly because it had been stitched into a blue velour suit since 1980. I’m not employing hyperbole there, either. It had been subjected to seat covers so neatly and closely fitted, I had to cut them off.

It was also completely standard too. The dash still housed the dual radio and tape deck, the mats were clean and mint. The headlining still had plastic on it. T’was ‘fresh’, as a rapper might say.

As a final bonus, it turned out that the rust was restricted to bits that bolted on, so nothing terminal at all. And then, just when I didn’t think it could get any better, the introduction of some new plugs, filters, fluids and a battery saw the old girl bark to life.

Best free car EVER. I rewarded it with a wash.

I then immediately f**ked its life up by taking it apart.

Its coming apart was okay though, as it was a means to an end. This was a car I might actually save – wouldn’t that be something?

I even managed to get a screen and some indicators for it from a guy (hi Stuy) for £50. Though curiously, he wanted the blue velour seat covers too. Probably for some sordid, filthy reason.

I also exceeded all my past efforts in terms of saving cars by arranging for it to go into a garage and have some professional body repairs carried out. Madness, it was utter madness. But it was good, progressive madness. Until that is, my wife decided she fancied women and not me, so I had to move in with my mother and sell the Sapporo for a gut-wrenching £200.

Here’s a picture of Stuy’s Sapporo. That’s how they should look.

It’s not all bad though. Mainly because my current Mrs is well fit and doesn’t fancy women. But also because the Sapporo did indeed live on, something I felt I played a big part in. I brought it back from the brink and put it within range of living on. I’m a car guy through and through, so the act of doing so made me happy.

It lives on now in Ireland I do believe, hopefully providing an Irishman or woman with many a happy mile of motoring. If you’re out there, new owners, enjoy that car. I miss it.