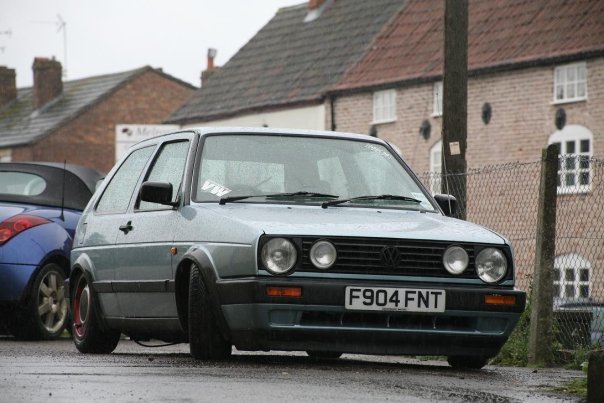 The Mk2 Golf represents a moment in my life when I took leave of my normal purchasing habits by opting to buy something sensible and practical. Of course, I undid all that by ruining it. Well, some would say ruined, others – namely 18 year-old boys in skinny jeans and baseball caps – would call it sick. Or phat. Or… I don’t know, I take no shame in not being ‘down’ with the yoof vernacular.

Anyway, the Golf. It was £300 from a man in Kent. It was pretty clean and tidy actually, something of a rarity for a Pollitt purchase seeing as most of my cars have come from canals or bushes. It also had MOT, tax and an engine that worked. All in all, it was quite a nice car.

Lovely, cheap, reasonably economical, basically it was a good little car. As such, I had to ruin it. Enter stage left a set of budget coilovers, Area 52 (the most epic workshop in town), a bunch of willing mates, too much beer and some pink paint and you’ve got a Golf that looks sick and/or phat.

In the middle of fitting the new suspension, and while drinking too much beer, and while deciding the helper springs weren’t going to be needed, we hatched a plan.

Could we MAKE A MAN FLY?

Yes. Yes we could. Bring on the cable ties.

Remarkably, this didn’t end with a trip to A&E

The car drove like a bag of shit. A bag of shit that rubbed the arches, bounced like a bouncy castle full of fat people and generally made anyone unfortunate enough to be in the car feel really rather ill. But still, it HAD TEH LOWZ as the kids say, so despite being a divorced father in his late 20s, I was WELL COOL.

My daughter just said that. No, really.

On the same day, things got silly. By silly, I mean someone had the bright idea to paint the trim rims pink with tiger stripes. I was too drunk to care by this point, so I let them crack on. I mean really, how bad could it possibly look…

…oh, right, now I remember. It would look really silly.

Still, I was cool. I was low. I had a Police sign (which I swear was obtained through legal and honest means *cough*). I WAS WINNING.

I was also, as is normally the case with modifying a car, losing, too. It was unbearable every time I drove it. My daughter regularly threatened to vomit when she was in it. It ran like a sack of shit and it generally became a chore to drive, but I HAD A TRENDY VW. It even ended up in PVW for a month. Scene fame, bitches be trippin’ etc.

After a short while, I sorted the suspension (so that it wasn’t riding on the bump stops) and treated it to a set of new wheels. I fitted a fancy stereo, some semi-decent speakers and then did what a normal person would do… I simply drove it.

I actually fell in love with it a little bit. It drove really damn well, it was comfy, warm, quiet and, after playing with the carb, it was incredibly reliable. So, er, I sold it.

The reality behind its sale was a hefty deposit to get my daughter into some fancy nursery. I still don’t understand her mother’s instance on that, I maintain that she would have been fine in the garden with a small shed and a blanket. Apparently though, that’s not the done thing.

Anyway, while is sucked to sell the Golf, it was okay. You see, I’d bought another Astra GTE and this one would be a solid, cash-heavy investment. I was sure of it.