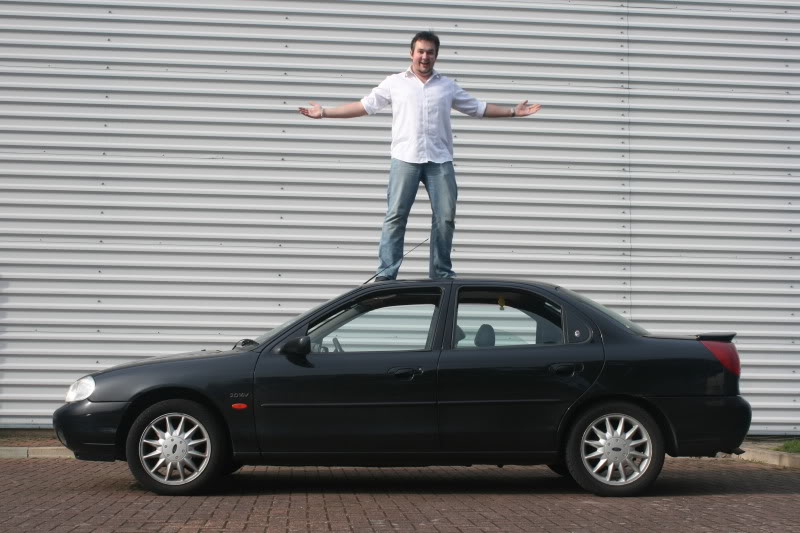 Man alive, where do I start with the Mondeo Ghia? It should be a simple tale of ‘man buys car, man drives car, man rips engine out and puts it in another car’. You know, that age old motoring yarn. It wasn’t though, thanks to the intervention of a mental neighbour, hopelessly optimistic plans and Bruntingthorpe.

The story starts off pretty innocently. As a journalist I constantly lived in a state of overdraft or credit card. As such, I had very little money to spend on, well, on just about anything. That included cars. I was normally relegated to owning and driving the type of car that looked abandoned. So imagine my joy when I stumbled on a Mondeo Ghia X for the measly sum of £450. It was full of leather. It had alloy wheels. The paint was shiny. It was a beauty. At least to my eyes of little aspiration. So I bought it, obviously.

I worked on Performance Ford magazine at the time. Tea boy, sweeper upper, I can’t remember what I actually did. What I do remember is that I had ludicrous plans to cut the floor out of the Mondeo Ghia at some point, so I could then fashion a rear-wheel drive setup, meaning I could become sort of drift king. The fact I had (and still have) fabrication skills of a smoked kipper didn’t seem to slow me down. I had some custom alloy wheels made for it, which clearly wouldn’t fit. And I bored anyone who’d listen with tales of drifting heroics. Oh, and I also bought (or was I given? I can’t remember) a Sierra Sapphire to rob of its floorpan.

Needless to say, none of that happened. Instead, I blagged a load of kit from Kenwood, did a stereo feature in the mag and then enjoyed a Mondeo that was the keeper of far too much bass. What can I say, I loved dem sick beats.

A cheeky wink there, for the ladies.

Happily, stereo installation wasn’t the Mondeo Ghia’s only time in the magazine. My editor, Luke ‘fart in a cup’ Wood along with Retro Ford editor Ben ‘awight at the back’ Morley decided a cheap car challenge would be a good idea. From a magazine point of view, it was great. We could shoot the whole thing in a couple of days and then drag it out for months in the mag. Cheap editorial, that. Plus, I had cheap a car. Morley, being ‘from the trade’ could get one for next to nothing (£50 in case you’re wondering). Namely an awful Escort cabrio with twin Webers for some strange reason. Alex ‘now works on What Car?‘ Robbins bought a Scorpio for £250, because of course he did. While Luke bought (I think, there’s every chance he stole it) a Mk1 Mondeo diesel saloon. We had our four cars. Time for some silly photos.

Honestly, your guess is as good as mine.

Seeing as the authorities take a dim view of four lads driving into each other on the M1, we opted instead to spend the day at Buntingthorpe Proving Ground. But not before spending the previous night a Premier Inn and thoroughly rinsing the company credit card. We were motoring journalists after all.

We also took the the cars to JamSport to see how much power they had and to also stop Morley’s Escort from pissing fuel everywhere. Not that his fuel issues mattered, considering he managed – while racing around Bruntingthorpe – to shift from fourth to first or something along those lines, reducing his engine to scrap in the process. He left it under a scrap 747 and called it day.

The rest of us didn’t. We raced around the old runway like heroes. As I recall, the Mondeo did surprisingly well. I think it had the fastest lap time, which was something. Plus, Morley didn’t spray paint ‘twat’ on my boot. I wish I could say the same for Alex’s Scorpio.

Oh, and we also dragged some poor man in from Meguiars to help us wash our cars. I think there were points for the car that cleaned up the best, and as such, my Mondeo Ghia won. Despite the fact spoiler fell off. But then it would, seeing as it was held on with Blu-Tack.

Once the cheap car challenge was done with, the same could be said for the Mondeo Ghia. Don’t get me wrong, it didn’t hurt it or anything. I just bought another car. Plus, the MOT was up and the sills were ‘holey’ to say the least. As such, I parked at home knowing that I would use the engine for my blossoming track car project. At least that was the plan, until I came home form work one day to find a Mondeo-shaped space instead of, you know, an actual Mondeo.

Turns out one of my neighbours had taken offence to it. I’m the first to admit that I’ve had some visually troubled cars, but the Mondeo was not one of them. It was clean, it was tidy, it was officially declared SORN and it was in MY PARKING SPACE. But no, the mad bint around the corner had it scrapped. Yes, she phoned a scrap man and amazingly, he took it away. The fact she had no keys, no paperwork and that he had to break the steering lock after smashing the window in order to move it didn’t seem to phase him. Outstanding.

I swear, I’m not making this up…

After nearly smashing the old goat’s door down, I managed to find out which scrap yard had claimed it. And when I threatened to get the Police involved, they promptly gave me the car back. Oh, and I pocketed the £100 they’d ACTUALLY PAID HER for the car. Unbelievable.

She was properly not right. In fact, she was on Channel 4’s How Clean Is Your House? due to her hoarding. I wish I was making this up, but I’m really not.

Anyway, I got that car back, but the damage was done. So I had it shipped to Horley (Morley’s garage) where I would rip the engine out of it in readiness for a new, albeit short life in my Escort track car. Rust in peace old Mondeo. It was certainly… interesting.