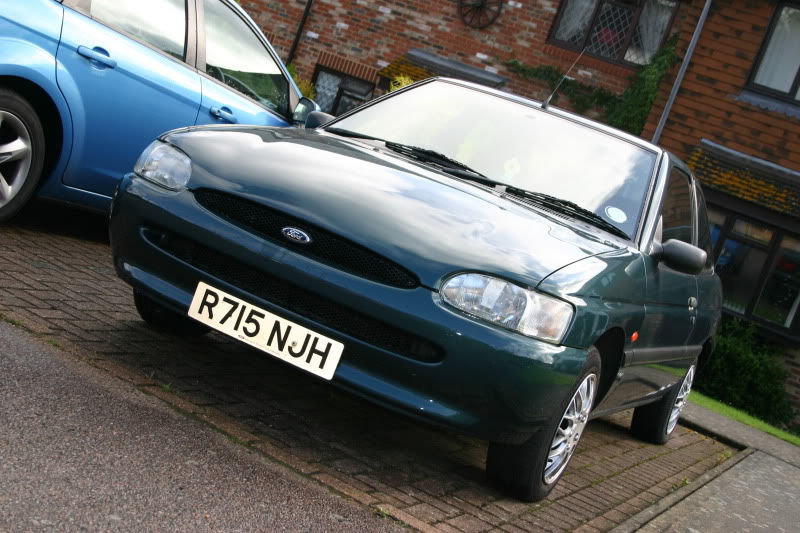 Right, I’ve not been keeping up with my own automotive failures, so chronology has gone out of the window. I’ll just update with the ones I can remember. And don’t worry, there are plenty. With that in mind, enjoy my story about a fling with an Escort. Hateful, cursed car that it was.

Build a car for the track, they said. It’ll be huge amounts of fun, they said. Well, they, in their infinite wisdom, were wrong. So very, very wrong. However, their overwhelming incorrectness was nothing in comparison to my phenomenal stupidity, mainly because I did in fact build one. Or at least attempt to. Humph.

At the time, I worked for a certain magazine which catered to those who enjoy a Ford of a Performance ilk. As such, building a track car seemed like a good idea. I’d get shiny bits on the cheap, I’d get to have bit of fun, and at the end of it all I could drive around the streets of Sevenoaks pretending I ‘lived my life one 1/4 mile at a time’ or some such nonsense. At least, that was the plan.

It started off well. I bought the Escort above for the princely sum of £160. Owned by a little old lady for many a year, it seemed like a good buy. The body was solid and the price was bang on. The fact that the cam-belt had snapped – reducing the engine to one solid block of bent metal in the process was something I chose to ignore. Besides, I had no time for a piddly little 1.6 anyway.

That’s not meant to be slack

Car acquired, I hit the spanners and stripped it down. I sourced fancy bits like coilover suspension, alloy wheels, stupidly sticky Dunlop Direzza tyres, bucket seats, a warning horn that went ‘bong’, some go faster stickers and most crucially of all, a 2.0 engine with some ‘go faster’ bits. I was excited, I felt like Steve McQueen.

You have to understand, the building of this car was something of a dream realised. I had been lucky enough to do a few track days thanks to work. I was a dab hand around Brands Hatch and I wanted my own car to take along. I had the Zodiac at the time, and that wasn’t exactly an apex clipper. The Escort would be though, because they raced Escorts. Sound man logic there.

I even had the original invoice for the Escort.

It may come as a shock to some, but I’m actually okay on a set of spanners. So I took to the car myself. I knew changing the engine was above my pay grade, but I had a plan for that. For everything else, I did it myself. And it was pretty damn enjoyable. I ripped all the trim out (saving 100kg in the process), I fitted the GAZ Gold coilover suspension. I had the tyres mounted to the Wolfrace Pro-Lite alloys and I fitted the Momo steering wheel.

Then I had it loaded onto a transporter and sent to Cheshire, complete with a 2.0 Zetec engine in the boot. Though that’s not where it would stay. Though it may as well have done, because it was no use under the bonnet.

Two months later, lots of building and spannering, lots of stickers and a train ride later and I was ready to pick up my pride and joy. My mind was filled with thoughts of clipping the apex and ‘closing the door’ and brum brum noises. I hopped in, fired her up, listened to ex-Mondeo 2.0 Zetec purr and hit the motorway bound for Bristol.

It was all going well. The car had incredible pick-up and the ride was astounding for an old hatchback. I was positively giddy. Then, some miles later as I was passing Clackett Lane on my way back to Kent, a bit of the engine fell out…

…which I probably needed if I wanted to progress with the rest of my journey. Arsehats.

Not one to be terrerd by something so trivial as an engine missing 25% of its roddage, I bought another engine. This time from a Mondeo automatic. That last bit is important, because in theory that would mean hadn’t been ‘buzzed’ by over-revving or generally abused. It was a low miler, too. So fingers crossed that would be the solution and the damn car could see a track.

That wasn’t to be though. Once in and running it started to knock like a bastard. By this point, as you can imagine, I was thoroughly pissed off. So I got rid of it out of rage. Silly really, as I sold it for a thousand quid. I could have sold it as parts for three times that. I know, I’m a moron.

And that, as they say, was that. Many bits of paper with the Queen’s face on had been wasted. The bugger had never seen a track and worst of all, I was forced to visit Clackett Lane services – seriously, it’s like it got to 1989, then time stopped in there.

Moral of the story? Don’t build a track car unless you have more than £85 in your bank. And certainly don’t use a 110,000 mile Mondeo engine. Or a cursed Escort. Hateful thing.