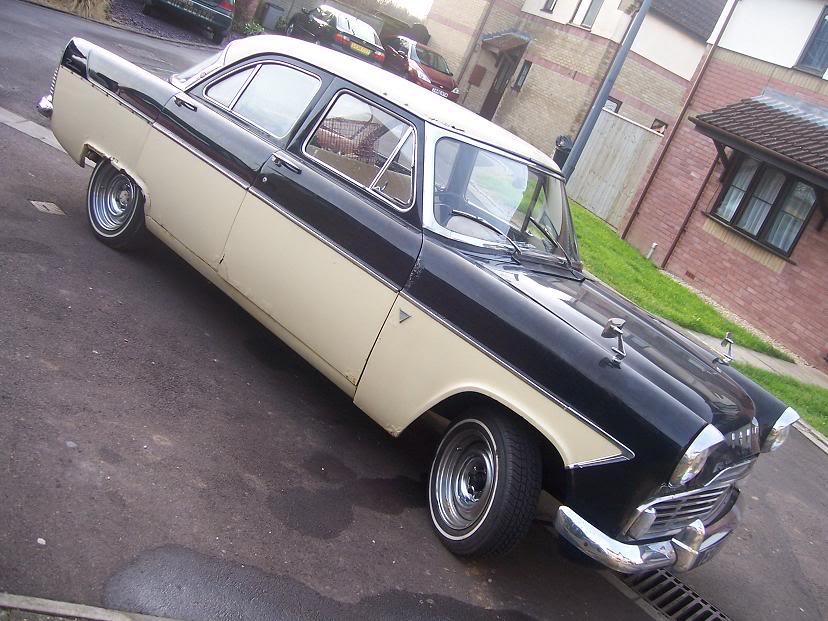 My Zodiac. I owned this car twice actually (it’ll take a while to get to the second time though, as I had a lot of cars before the Zodiac wheeled around to me again). For round one it came from my then brother-in-law who’d bought it some years previous. He was one of those guys who wore turned-up jeans, liked stuff from the fifties and got all tingly in his trousers at the mere mention of Betty Page. A 1961 Zodiac then, was right up his street. Until that is, it stopped working.

It sat on his drive for a few years, breathing in the salty Worthing air that surrounded it. Then, after getting far too drunk at a family gathering, and after somewhat bizarrely being encouraged by my then wife, I agreed to buy it for £500. The fact I didn’t have £500 was very much beside the point.

As it looked when it arrived at my house – crusty

When it arrived on the back of the most rickety looking recovery truck I’ve ever seen, it was slid onto the driveway, at which point I promptly jumped in and made ‘brum brum’ noises, because I’m a child. And, to be perfectly honest, because it was incapable of making them itself.

Keen to remedy the engine’s hesitance to be an one that worked, I did what anyone would do in my position. I jacked it up and took the wheels off. Regular readers will know that’s something of a speciality of mine. Though obviously it wasn’t going to do anything to help the poor old girl run.

I soon manned-up and ventured under the bonnet, once I’d convinced myself the wheels were not the source of the problem. My engine bay adventure was promptly rewarded via the means of sparks and a fairly significant electric shock. Things weren’t going well.

As it turned out, the earth strap on the battery wasn’t fitted properly. Not only that, but the ignition was in the ‘on’ position despite the key being nowhere near it (though I later discovered the car could be started with a 5 pence piece amongst other things). So, when I jiggled it, it completed the circuit and zapped me. Bastard thing.

Still, good news was that it ran, which gave me a good excuse to make questionably-titled videos in which I rev it up a bit then finish by making the cutthroat gesture to two noisy children. It’s a masterpiece, observe…

Speaking of kids, I knocked the Mrs up around this time. Mini Pollitt was on the way and there was very little we could do about it. With that in mind, a shagged 1960s Ford with more rust than a canal-based shopping trolley was probably an unnecessary drain on our already tight finances. It had to go.

Still, I stood to make some profit. In the short time I owned it, I’d freed off and bled the brakes, I’d got it running again, I’d repaired some bits of the body and I’d even had the rust in the roof gutters and boot floor professionally repaired by the bodyshop next door. A sale was a guaranteed success, or so I thought.

With a heavy heart I put an advert on eBay only to be met with a sea of knuckle-draggers and illiterates who wanted to banger race the old girl. Not. On. My. Watch. I cancelled the auction.

That’s when I got a knock on the door from a guy who lived not too far away, who – somewhat creepily – knew I had the Zodiac and had seen it on eBay. As I lived at the end of a very quiet cul de sac at the time I was mildly concerned by his sudden appearance, but hey, an interested party is an interested party.

Excited by the prospect of a sale, I hurriedly showed him to the car. He seemed keen, I was keen, he had no money…

Yes, this fool had come to see a car that was for sale, with no money. What a moron, right? RIGHT? No, actually. The moron was me, because I swapped the Zodiac for a 1977 Mk2 Ford Capri 2.0. You can read all about that horror right here.