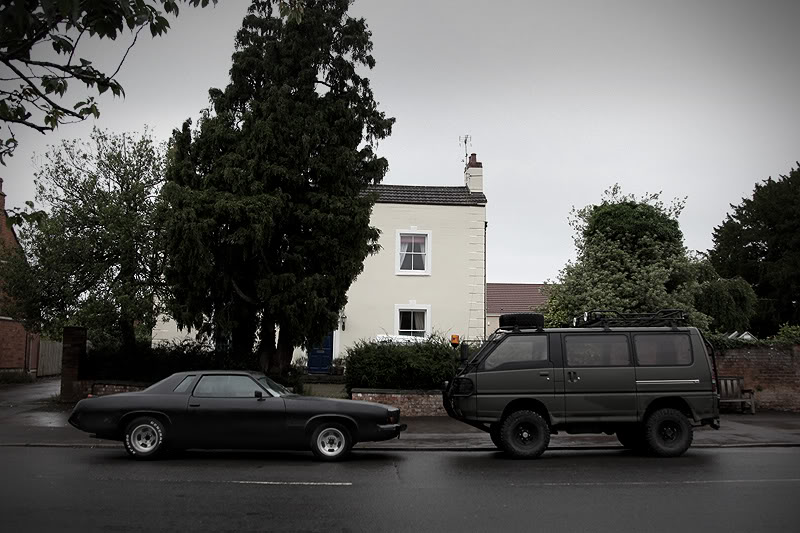 I don’t know where to start with this Oldsmobile. Mainly because whenever I think about it I convulse and gag slightly. I put my ownership of this car, a car that was once a 1973 Oldsmobile Cutlass Supreme, down to some sort of temporary madness. An out of body moment, if you will. It has to be down to something like that, because while I’ve owned some shocking cars in my time, this one was on another level. But, y’know, it had a V8 so it wasn’t all bad.

That there is me. At the moment this photograph was taken by my good friend Bruce, I had just handed over £900 for the Oldsmobile on which my bottom is perched. And the very millisecond that wedge of folding left my fingertips I was filled with a deep, frightening sense of regret. Yeah, to the casual observer it looked cool, but in reality it was an abysmal deathtrap. But, to reiterate, it had a V8. A 350 ‘rocket’ V8 to be exact.

It was 2012 when I bought the Oldsmobile. I’d come into a few quid and, while browsing American cars on eBay, I stumbled on this. It’s a corner of the internet you can often find me in. I’m a huge fan of Yank motors, thanks in no small part to my father (he has a beautiful 1955 Ford Thunderbird).

As such, I like to window shop via a PC screen. Never does, or indeed did it cross my mind that I might actually be able to afford one. So you can imagine my glee when I saw this. It was local, it was a V8 and unlike most cheap American cars, it was a two door. That’s serious muscle car kudos, right? That’s what i told myself at least. So without thinking about it, I clicked ‘buy it now’. Idiot.

Just look at it. How the damn thing had an MOT I’ll never know. One can only assume Ray Charles did it and Stevie Wonder signed it off. In the dark. While drunk. Still, as far as I was concerned it was a road-legal car, so I phoned up Adrian Flux, pulled my pants down, bent over and payed them to insure it. I then arranged a day to collect it and silently waited for an act of God to intervene. It didn’t happen.

I can’t remember what day I picked it up. I just knew it was wet and horrible. I also remember the owner wasn’t there, but his father was. I’m sure I heard him laughing once he shut the door. Anyway, I was given the, um, key. Well, I say key. It was a big red cut-off switch. I turned it in the crude hole in the dash then hit the ‘start’ button. Except it wasn’t a start button, it was a ‘push to stop’ button. You know. From a bus. Nice.

With the V8 burbling I acclimatised myself to my surroundings. I also weighed up the risk of contracting some kind of awful awful disease. I also regretted not buying a hazmat suit. All I had was a steering wheel of indeterminable origin, a B&M shifter and two pedals. Anything Oldsmobile that may have once lived in there was long gone. The dash was a curious mix of aluminium and wood screws. None of the gauges seemed to do anything. There was no trim at all and the door pulls were chains. Big, industrial chains.

As soon as I set off something was awry. The Turbo 350 3-speed auto transmission didn’t shift. Thankfully I quickly figured out I needed to do it manually. No big deal there. After some fuel and some curious/frightened stares from onlookers, I got a bit more comfortable and headed out on the 30 mile drive home. All the while trying to convince myself that everything was fine.

Everything was not fine. The damn thing puked its guts out when I got home. Something was wrong with the cooling system and I was buggered if I was going to investigate the problem. Instead I went to the pub to drink cider in a bid to forget all about what I’d just bought.

It didn’t work. The Oldsmobile was still there when i left the pub. A few days later I gave it a proper look around. Here’s what I discovered:

There was a show coming up (the excellent Retro Rides Gathering) and I wanted to go. Before doing so, I wanted to try and fix a few things. Just minor stuff like lights, and indicators… and brakes. While doing so two little old ladies walked by. Now bear in mind that the bonnet was up. My tools were strewn around and I was stood there. One of them asked “Has that been abandoned?” Good stuff.

I got it to the show and decided I didn’t want to drive it home. So I crudely wrote a ‘for sale’ sign on the rear window and hoped a show-goer would buy it. It didn’t work, and that was shame because I didn’t want to drive it home. Like, I REALLY didn’t want to. You see some chums discovered the steering wheel wasn’t actually connected. The splines on the steering column were worn down. It only went the way I pointed it because the power steering was exceptionally good and another wood screw had a small grip on the column.

My mates shimmed it out with a Pepsi can. Solid fix.

When I got home and, more importantly, when my pulse rate had dropped to an acceptable level, I put in on eBay and sold it. Got £800 for the bastard too. A man called Michael came from Milton Keynes for it. And here’s where it gets strange for a Pollitt car: IT IS STILL ON THE ROAD. I know, madness.

Old ‘Mikey baby chips and gravy’ has fixed it. A bit. And he’s even drag-raced it. He’s a braver man than me, that’s for sure. Fair play to him. If he’s happy, I’m happy. And why am I happy? Because my name isn’t on the damn V5 anymore.

Huge love and mad props to Bruce Holder for the images and for taking me to get it (hang on, should I thank him for that bit?). You can find Bruce’s incredible, automotive-themed laser work here. Go on, do a buy.