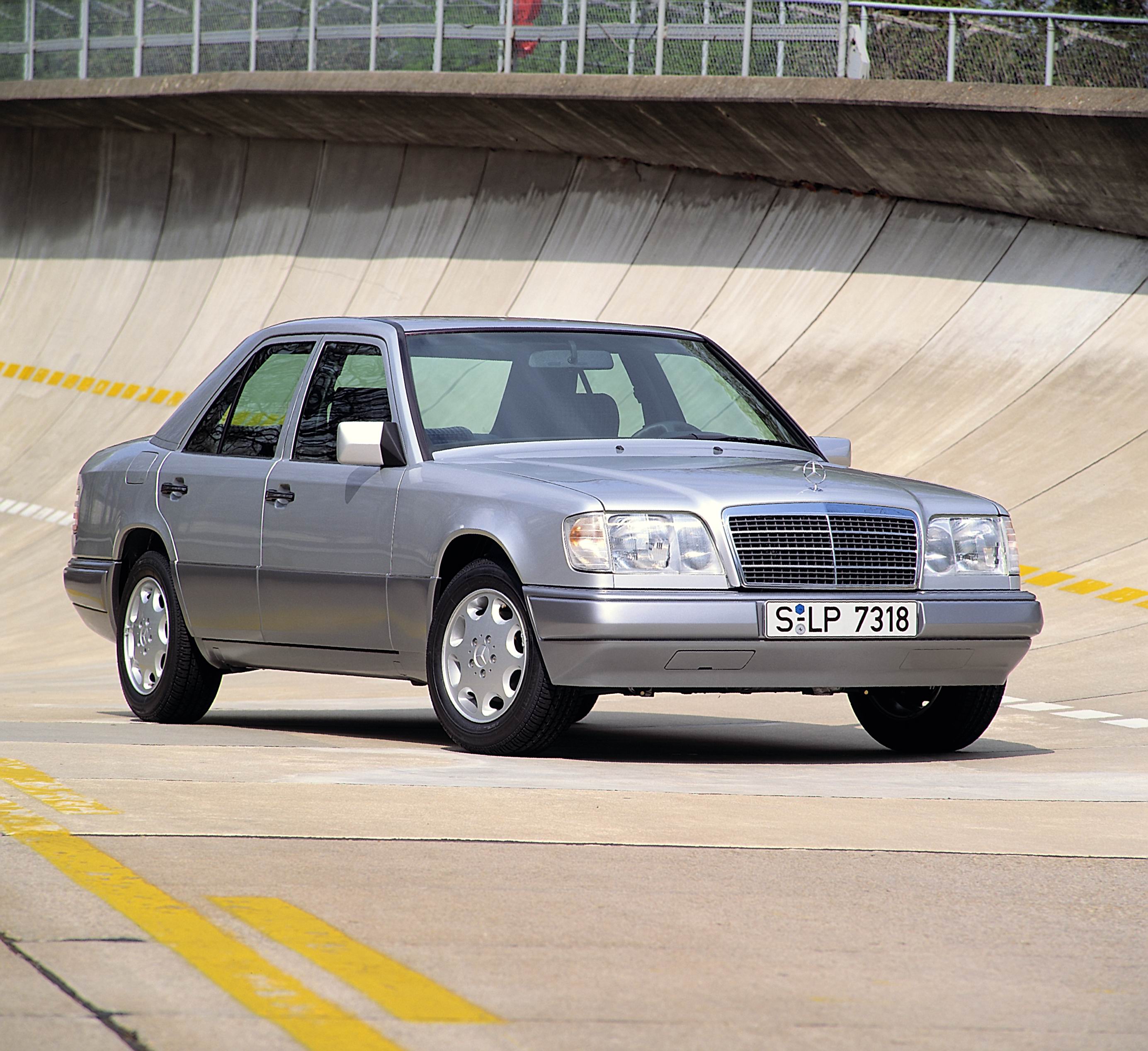 Every now and then, we here at Not2Grand will stop looking at AutoTrader long enough to check other websites. A case in point being today, when we had a look at Facebook. We don’t normally bother with Zuckerberg’s digital baby, mainly because we don’t care that Karen from accounting “needs a glass of Chablis, am I right, ladies?“.

Still, Karen’s inane warblings aside, it was a worthwhile click, because we were reminded of a classic motor we’ve yet to cover here. Namely, the Mercedes-Benz W124. As such, you’re now getting a post about it. And not only that, we’re going to tell you the exact car you should buy. In a nice way, that is. We’re not trying to run a dictatorship here. Yet.

The W124 was introduced to the world in 1985. It was the first car to bear the E-Class name, taking over from the much-loved and equally indestructible W123. It had big shoes, or should that be tyres, to fill. The W123 was a popular machine and its reputation for being as tough as a coffin nail was something buyers would expect from its successor. The W124 could not fail. Happily, the 1980s was a time when Mercedes-Benz still knew how to screw a car together. Unlike the 1990s. Urgh.

Engineered to within an inch of its life, and bolted together by machines and men that worshiped at the altar of Germaic build quality, the W124 instantly lived up to expectations. Even today, when you sit in a W124 there’s a feeling of solidarity, of strength, even. It was a car that cocooned you and made you feel safe. Get behind the wheel of one of these, and you’ll feel like you can take on the world. And given the fact some W124s have been known to clock over 1,000,000 miles in their lifetime, world domination becomes a very real prospect.

It was full of innovation, too. It was one of the first cars to adopt plastic covers and sculpting on the underside. Combined with the aerodynamic body, it had a drag coefficient of 0.28 on some models. We don’t know what a drag coefficient is, but a number that low must be a good thing, presumably? It also had a single front wiper, before kids were doing it to Saxos in copies of Max Power from 2004.

It was bloody safe, too. The W124 had an airbag for the driver and went on to be one of the first cars to offer one for the passenger, too. The Germans, not just saving your face, but also the face of your mate.

Also, if you were in a crash, the W124’s core was fettled from high-strength (but still lightweight) steel. That resulted in it being one of the strongest and as such, safest cars on the market. In fact, Mercedes-Benz subjected the W124 to an array of unforgiving crash tests to ensure no deformation of the passenger compartment. From both frontal impacts and hits from the rear. And the car, provided it’s been looked after, still holds up today. Okay, so it’s not awash with driver aids and so on, but from a metal-on-metal perspective, it’s a tough cookie. A rare thing when looking to buy a classic car. This is a motor you can ferry the family in without fear.

Underneath, the W124 had fully independent suspension thanks thanks to the use of a multi-link system on the rear. Add in the carefully considered spring rates and dampers, and you’re left with a surefooted but also agile chassis. Though its agility would be down to what engine was firing it, and in the case of the W124, there were many.

There are simply too many to list here, but they ranged from four-cylinder petrol engines, through to straight sixes and even a V8 – though the latter was and still is big money, owing to it being a special project between Mercedes-Benz and Porsche. And of course, there was also a brace of diesel engines available, too. Some were basic in their operation. So you could run them on used cooking oil. Handy if you own a kebab shop. Or a chippy.

Bodily, the W124 was available in array of styles. There was the standard four-door saloon, popular with cliched baddies in films like The Bourne Supremacy. Or of course, there was the CE coupe version for the bachelor about town, or a convertible for the bachelor by the Med. Then, when he suddenly became burdened with a four children and a wife who hates him, there was the TE estate version. Mercedes there, covering all the bases.

It truly was an ‘every man’ car. With a huge number of engines, trim specifications and body styles, there was no potential demographic left untapped by the W124’s designers. Add in the fact the W124 has, in our eyes at least, a timeless look, and you’ve got the ultimate car. Because let’s face it, an old Mercedes doesn’t get frowned upon like an old Vectra. You could rock up to Gala Bingo in a W124 and be treated like royalty.

Today, the W124 is instantly recognised as being a classic, and rightly so. It’s earned its stripes and deserves to be thought in the same fond way as the cars before it. As we said, the W124 marks a time in history when Mercedes-Benz really cared about how it built cars. Many argue the W124 is the last of the greats, and we can’t blame them.

However, classic car status means that prices are starting the climb, and soon they’ll be out of reach to us mere mortals. Look at the W123 – we bought one for £250 once. That’s not happening again. And we suspect the same is going to happen with the W124, at least in the case of examples that you’d actually want to buy.

Handily though, we’ve taken some of the legwork out of the buying process for you, by finding one you should buy. Yep, all the pictures on this page bar the silver car are of Lewis Kingston’s W124, and it can be yours for just £1,600. Hot damn, get those wallets out!

That’s a lot of car for the money. And we can promise you that when Mr Kingston buys a car, he’ll often search for the best one available. Plus, he has a ’68 Dodge Charger, too. Which, in man maths, means you can trust him as a seller.

The car in question is very green, yes. And the interior is very… well, we don’t know how we’d categorise that colour. But when it’s that minty fresh, who cares? Add in the fact it’s had new discs and pads all round, along with an extensive recent service, and you’re left with a blinder of a car. It’s only a 220E, so you won’t win any land speed records, but who cares? One wafts along in a W124, one doesn’t race. Oh, and it’s only done 102,000 miles, so there are about 900,000 miles left in it.

Get in touch and get this bought, it’s only going to go up in value, we assure you.