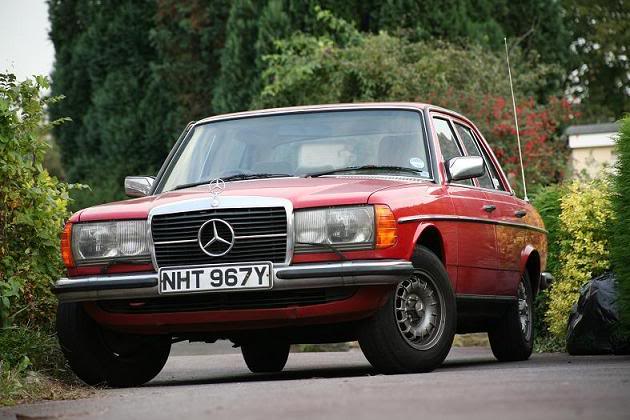 You’d think after the last W123, I might have exercised some sort of restraint when faced with the opportunity to buy another. As you can tell by this update, I did no such thing. Because I’m an idiot.

I’m also pretty rubbish at having money in my pocket, namely the money from the sale of the Capri. But, giddy though I may have been, there was still the undeniable fact that I needed a car. With £1000 in my sky rocket I could have gone out and bought something sensible. An Astra, or a Mondeo, or another bloody Vectra. Just something dull but reliable, ergo, SENSIBLE. But no, because I’m me, I scoured the local paper for something needlessly large, thirsty and rusty. Urgh.

The W123 is a good car. It was properly screwed together, they run forever, they’re smooth, powerful and luxurious. They are the epitome of classic Gemrman motoring. Unless of course, you pay £450 for one that was lingering down a back alley somewhere in one of the less attractive parts of Bristol.

The chap I bought it from was as Bristolian as they come. His face was red from excessive cider consumption, his words were mumbled and his hat was both perched and jaunty. Yes, jaunty. The perfect embodiment of a man trading in classic cars he was not, because, er, he wasn’t that at all. He was a builder. The car had been taken in as payment for something that I assume will end up on ‘DIY SOS’ in the near future.

This clagged up the question part of the sale because he knew nothing about it other than it was a Mercedes and it was red. This would normally set off alarm bells for most people. A surefire scenario in which the act of walking away would have not only been encouraged, it would have been applauded.

I didn’t even haggle. Just coughed up £450 there and then. Knob.

*It smelled so very bad inside. It was clean and tidy, but smelled like a wet dog wrapped up in a three week-old, used Subway rapper

*It was unspeakably slow. Not ‘I thought it might be a bit quicker’ slow. It was ‘damn near going backwards’ slow

*The gearbox had no idea what it was doing

*It had a hideous misfire

*The heater was stuck on

*Something under the dash kept going “eeep”

That was the longest four mile drive of my life. Whenever I buy a new car I’m always nervous of it. Even if it’s a decent example (yes, that has been known to happen) it still takes me a while to settle into a state of familiarity with its idiosyncrasies. I’m sure I’m not the only one. In the W123 280E however, it was genuine fear, and by the end of those four miles it was also genuine hatred. A hatred that intensified upon exiting the vehicle only to have to look at the BLOODY AWFUL GRILLE.

While my love for the car had fallen before it even had chance to rise, my love for the W123 in general hadn’t. So, I dug deep – both into my wallet and into any remaining enthusiasm I had – and took it upon myself to put things right. I convinced myself that at its core it was a good car and as such, it could be saved. Again, this is a train of thought that sees me residing firmly within Camp Idiot.

I ordered some HT leads (unthinkably expensive), another grille, a new heater switch and for some reason I’m still not able to fathom, some clear indicators for the front. Yes, clear indicators. Like what a 17 year-old puts on a Saxo.

Sticking with the Saxo theme, I also fitted the most gaudy, naff, blingy and pointless stereo I had lying around. It was a Ripspeed one from Halfords. I don’t need to say any more.

If you’re punching your monitor right now, it’s okay, I understand. I’ll buy you a new one.

As you can see, my efforts were a class act in futility. It still looked like a rusty bag of crap. And those new HT leads? They didn’t solve the problem. It still ran like cement mixer full of bowling balls and it still needed a BP tanker racing alongside to keep the damn thing from draining the tank.

Then, because I was young and stupid, I thought to myself “I know, I’ll lower it” because as we all know, lowering a car solves all its worries. All of them. Ever. Isn’t that right, Internet?

I didn’t lower it. I got as far as taking that picture. It won me some internet points, which is the main thing.

I didn’t lower it because, while driving home from work one day, I found myself to be completely overwhelmed by my pure, unadulterated hatred for the thing. My lungs were heavy with the untraceable stench of whatever had died in the seats. My wallet was worn from constant fuel purchasing. I’d had enough. It went on eBay pretty soon after. And I sold it. For £500! Ignoring the fact I’d dropped £150 on parts and £45,000 on fuel, I’m still calling that a win.

Now, for all its horrors, it was still a taxed, MOTd, running(ish) W123 Mercedes-Benz. Even in 2008 that was a bargain. You’d think matey who turned up to buy it – waving his Billy-big-bollocks story about being a Merc specialist all over the shop – would have seen that. He didn’t though.

He bought it and took it away, only to then list it on eBay a week later, bitching and moaning about all its faults (faults I had clearly listed online). He’d also inexplicably spray painted the inside of all the rear windows black. Weirdo.

That annoyed me. I’d been honest. At least I gave him that. I had to buy it off a flat-capped man who’d took it in payment for a sodding conservatory.