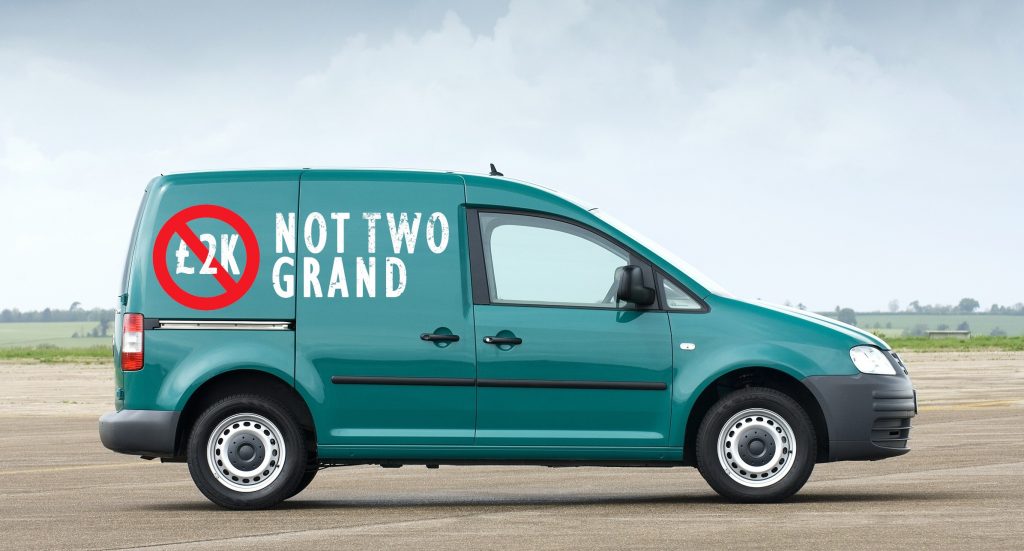 Vans are the Swiss Army Knife of transport. If you can’t do it with, in or near a van, then it’s probably not worth doing. Despite having never owned a van, we love them. We will own one at some point. And while many might argue that the Ford Transit is the ultimate in vannery, we think we might have to go with ze Germans and get ourselves a Volkswagen Caddy. The Transit, while awesome, is prone to dissolving at so much as the fine mist of a sneeze. Plus, if you drive a Transit and you’re not in the ‘trade’ you always end up looking slightly suspicious. Do you just like space, or are you planning a ram-raid on the local Bargain Booze? Nobody really knows. A Caddy, however, has all the fun of a van, while being pleasantly car-like. The staff at the aforementioned Bargain Booze won’t bat an eyelid when you pop in for some Thatchers. 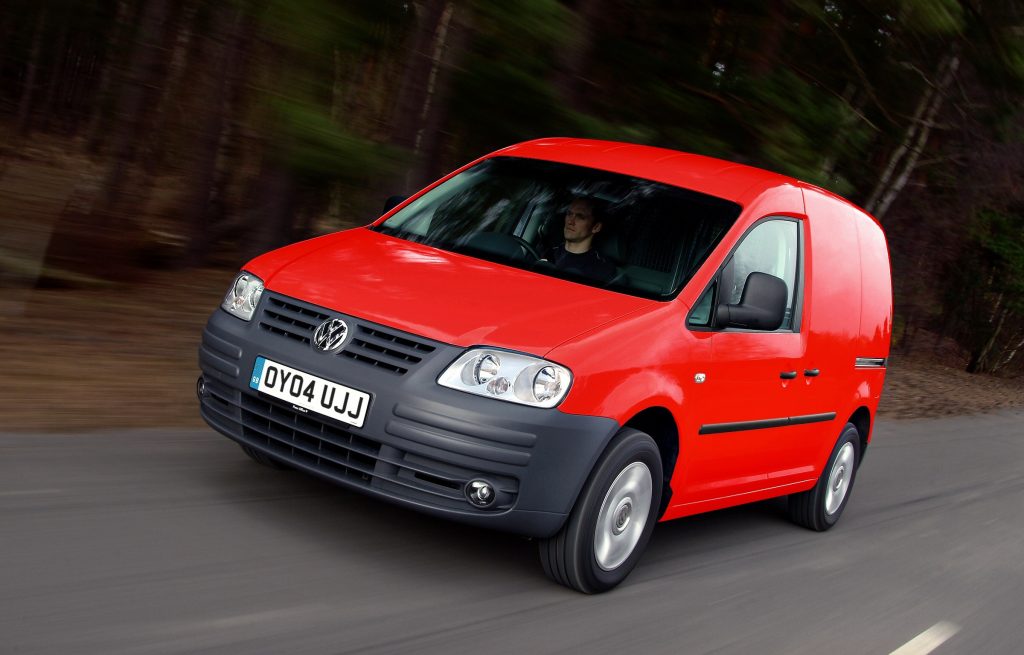 The Volkswagen Caddy has been around for a long time. It started life as the pick-up version of the Mk1 Volkswagen Golf. Then there was the Polo-based Caddy, which looked like someone had reversed a Polo into a fridge. Then, in 2003, there was this version, or the type 2K to give it its internal code name, which is delightfully fitting. It was a step up over the Caddys of old because for the first time, it was based on a platform that was a useful size. In the case of the 2k, that meant mix of Golf Mk5 and Touran. Both decent-sized vehicles. Furthermore, the 2k Caddy was designed to be a van from the off. Yes, it used some passenger car underpinnings, but the body was built to purpose. It’s not some awkward hybrid of car and commercial vehicle. As such, it looks better, it looks more natural. If you can say that about a van? We’re not sure.

Of course, you’re not buying a van for the looks. You’re buying it so you can fit shag-pile carpets, portholes and a disco ball. You can play soft jazz from a dated record player as you try and used the van as some sort of sexy mobile boudoir. THAT, that right there is what vans are for. 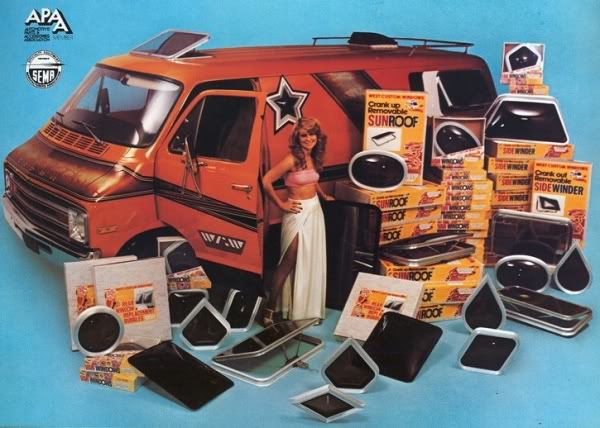 Okay, maybe not. Though we’re not your dad. If you want to buy a Caddy and do that to it, go for it. That’s the beauty of a van. The world is your sexy, felt-lined oyster. Of course, if you don’t want to be stuck in the ’70s, there are plenty of other options. There are firms on eBay that will sell you all you need to convert your Caddy into a small two-man camper. It might not be the most luxurious camping solution, but it’s better than being in a wet tent that a stray sheep has decided to eat.

If you don’t want a wheeled Air B&B, you could always used the Caddy as an incredibly practical every day car. Some were built (the Caddy Life) for exactly this. However, they are pricey. But don’t be disheartened, as you can buy a second row of seats and all the fixings online. You’ll be left with a ‘car’ so practical that no trip to Ikea will ever end in ‘it won’t fit in the car’ disaster.

Or of course, you could do the unthinkable and just use it as, you know, a van. If it were our money, and because we don’t often need to move rubble or flat-pack kitchens, we’d drop a few quid on sound deadening and carpet. Make the back a nice, snug place to be. That way, the van can be everything. If you need to move stuff, you can. If you want to throw an air bed in the back, you can. Again, the options are limitless. This is why vans are ace. 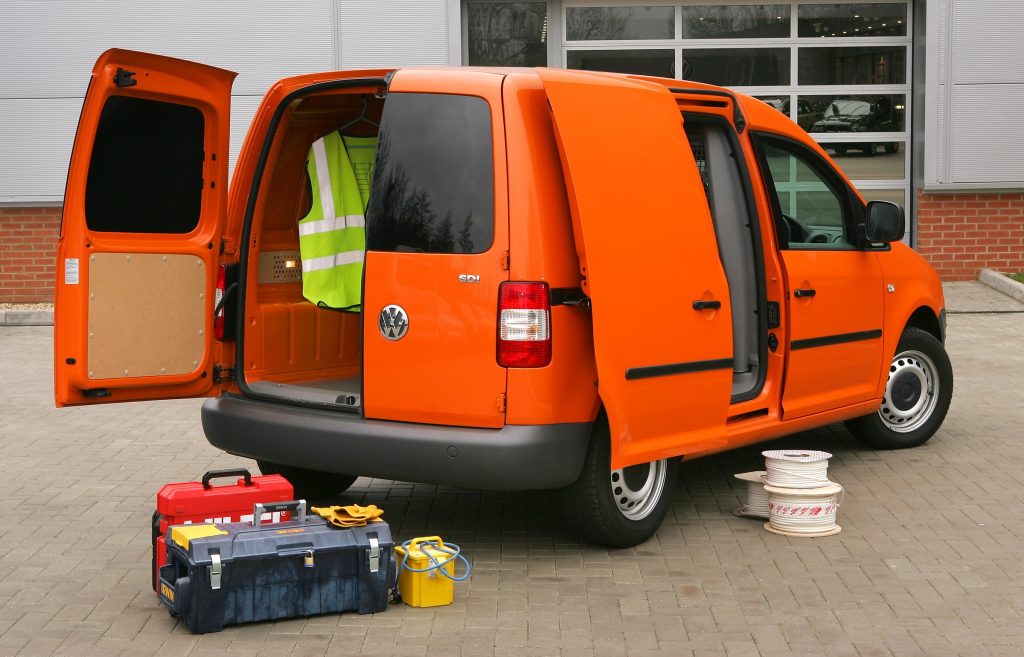 Back to the nuts and bolts of the thing. The Caddy had Touran front suspension for the most part, with leaf springs at the rear. That rear setup is hardly revolutionary, but for the commercial needs of a van, it’s ideal. Plus, because Volkswagen knows how to screw a vehicle together, the Caddy doesn’t feel like a van. In fact, it feels remarkably car-like to drive. It’s well-mannered on the roads with decent handling, well-weighted brakes and reasonably engaging steering. It’s nice to drive. And not a lot of vans can boast that.

For the money we’re talking, you’re going to be looking at a 2.0 SDI naturally-aspirated diesel with a dizzying 68bhp, or the mich better 1.9TDi turbocharged unit with a much more respectable 102bhp. The SDi is, make no mistake, a tough little unit, but it is glacially slow. The sprint to 62mph took over 20 seconds when it was new. With 150k on the clock, it’ll be a bit slower. The TDi version is the one to go for, however, you may have to save a little more than two grand to get one worth having. Remember, vans are working vehicles, and they lead rugged lives. You want one with plenty of history and minimal abuse. happily, this isn’t as hard as you might think, as the Caddy was only ever a light commercial, not a heavy-duty load-lugger.

Transmission-wise, both were fitted with a five-speed manual. 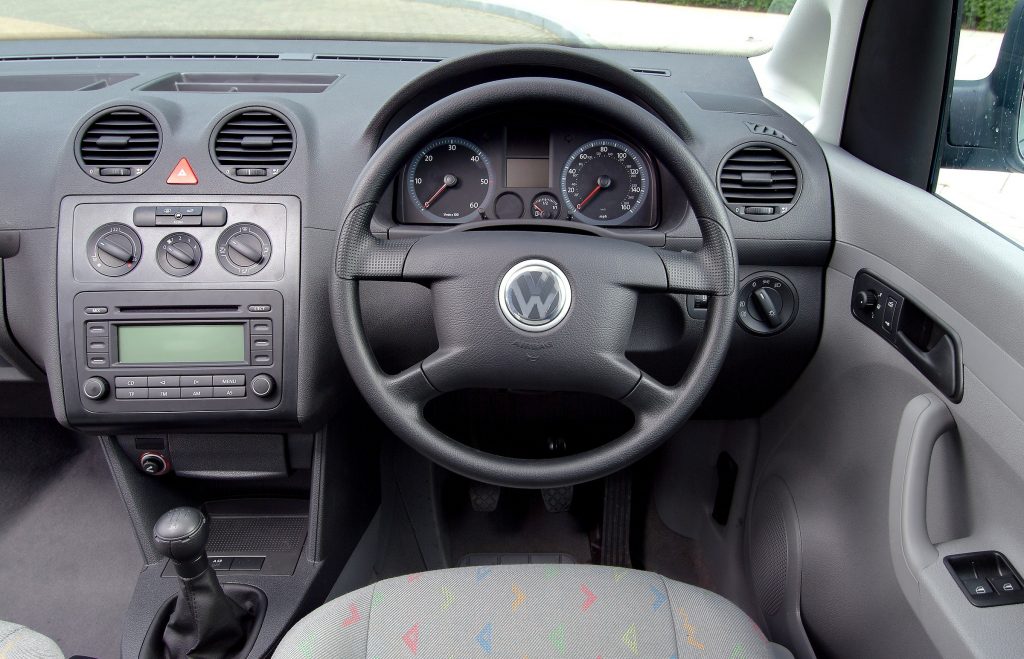 Inside, the Caddy was and still is a nice place to be. Obviously, on the used market they’re not going to look as nice as the picture above. However, Volkswagen does good work when it comes to interiors, and they wear their work years well. You need to look for signs of careless damage and neglect. Happily, because the Caddy is deemed as a premium product in the van space, most have been looked after. And even if they are a bit worn and battered, the aftermarket is vast for this van. Replacement parts are never more than a couple of clicks away.

And that leads us onto the big appeal of the Caddy – the aftermarket. Volkswagen vans have always and will always been seen as cool. Whether or not you subscribe to such things is beside the point. What matters is the Caddy’s status within the Volkswagen scene. This status means that if you want wheels, coil over suspension, engine tuning, interior modifications, chassis modifications, body alterations, whatever, they are more than likely out there. You can customise your Caddy into whatever you want it to be, and with largely ‘off the shelf’ parts. Not many vans can boast that. This is a van you can buy for the benefits, but with none of the ‘white van man’ compromise or stereotype. And if you think we’re mad by suggesting you modify a van, it might be worth mentioning that the Caddy was a successful race… car? 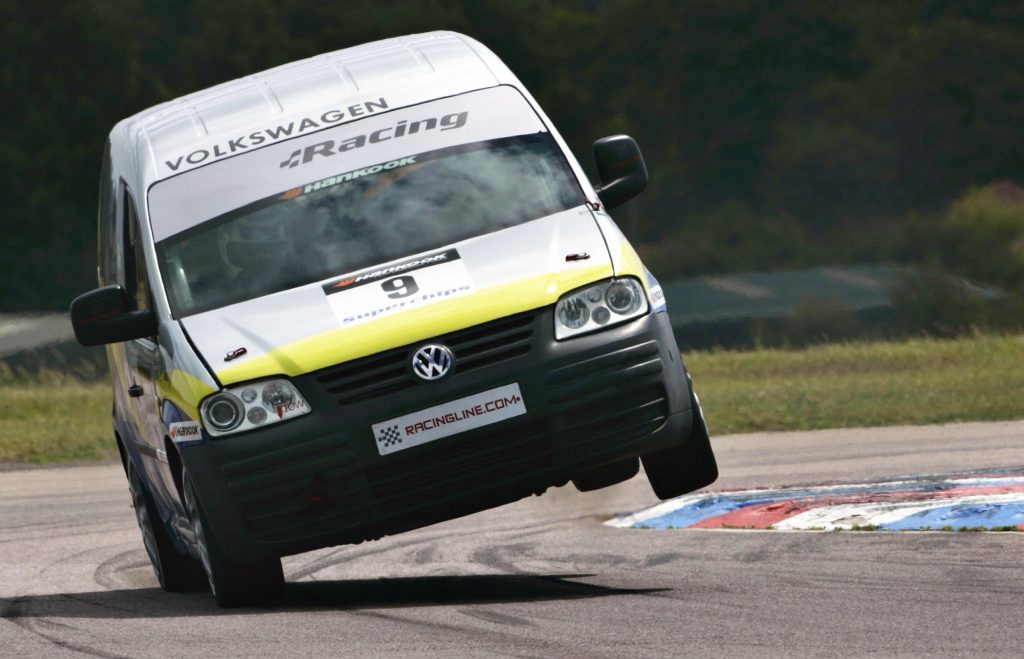 Look at it! It’s a van! Picking up two wheels! There are’t many Peugeot Partners that can boast that. And this isn’t some promotional one-off. Many drivers and teams successfully campaigned the Caddy in the Volkswagen Cup. This is what comes of being a car underneath for the most part. The tuning potential is massive. If you have a reasonable level of ability, you can drop the engine from a MKV Golf GTi in there without too much fuss. Add some mods, and you’ve got a 275bhp van. That’s mega. or you can just tune the 1.9TDi lump, which, thanks to being huge in the car world, has myriad tuning options available. 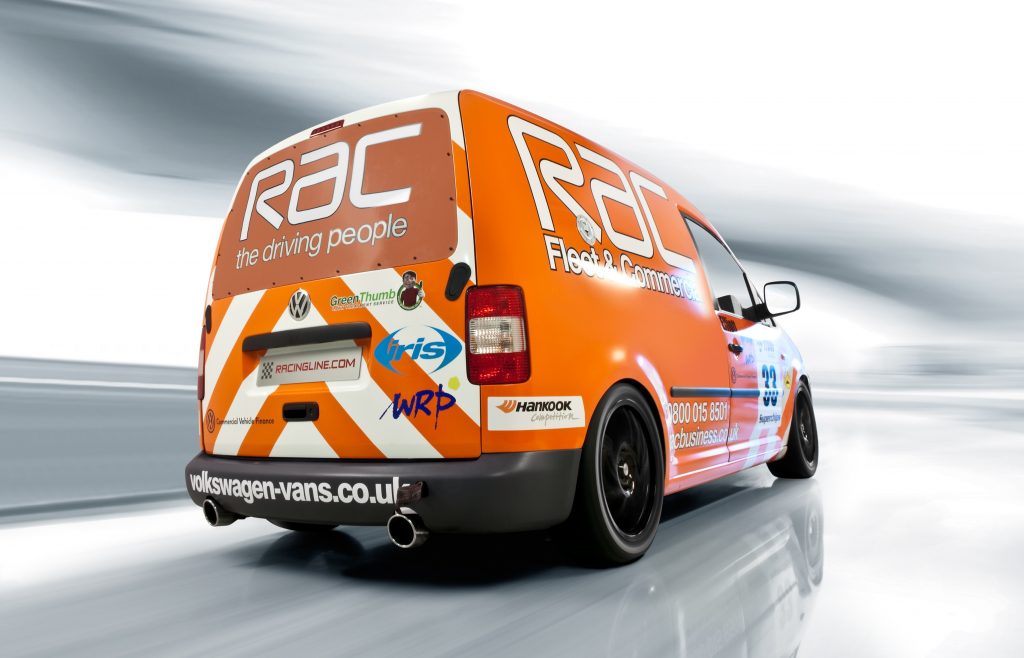 We adore the Caddy. It’s good to drive, it’s comfortable, it’s reliable to a fault (if looked after) and it’s not even too hard on the eye. But more than all that, the Caddy has the potential to be whatever you want it to be. The only thing that limits a Caddy’s potential is your imagination. It can be your car, you camper, your support vehicle, whatever. It can be a car for adventures, or it can be a car to go and get the shopping in. It can be fast, it can be slow, it can be modified, it can be standard. Whatever you need your four-wheeled friend to be, the Caddy will usually oblige.