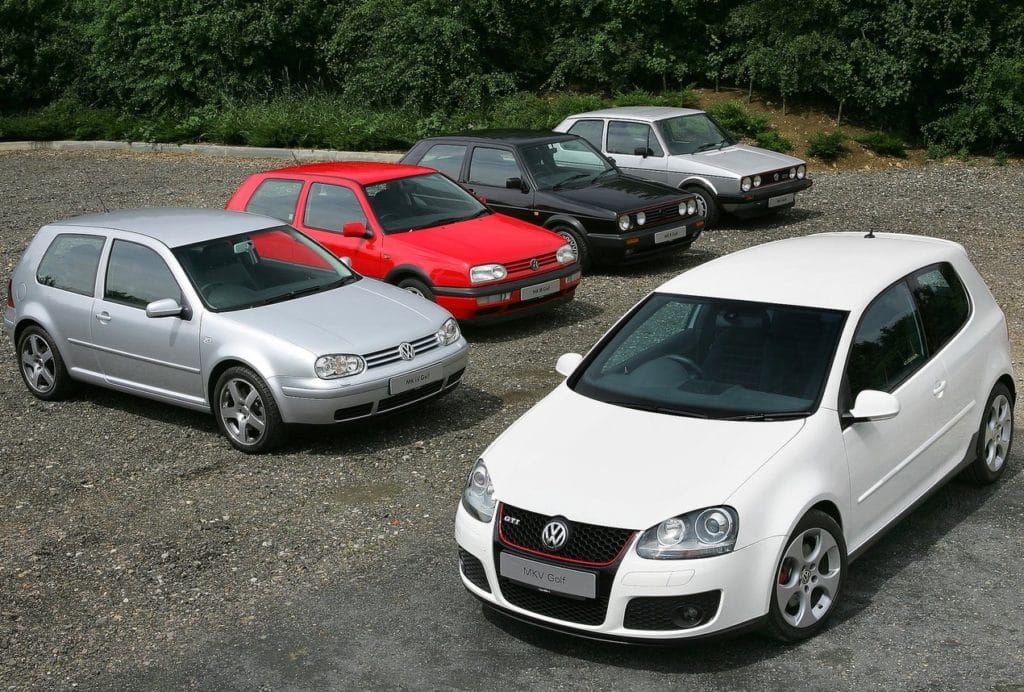 The Mk1 Golf GTi was hot hatch genesis for the masses. It was a revelation, a champion of its time. A legend. The Mk2 was a bit fatter, but it still retained the charm of the original, and when Volkswagen started building it with sixteen valves, it was epic. The Mk3, however, was bum gravy. But it was nothing compared to the travesty that was the Mk4 Golf GTi. Okay, that’s not entirely true, as the Mk4 was the first Golf GTi to be fitted with a turbo, and in the case of that model, it was okay. The 2.0 naturally aspirated GTi, however, was the automotive equivalent of eating wallpaper paste. And because of that, the Mk5 had a lot riding on it. By this point, 2004, the hot hatch market was vast, varied and deeply competitive. If Volkswagen was going to take back the crown, it had to knock it out of the park.

It didn’t knock it out of the park. Instead, it strapped ‘it’ to a missile and sent it into orbit. The MkV Golf GTi was not just good, it was a triumph, a spectacular return to GTi form. It still is, in fact. And what’s even better is the fact the MkV has now slip into the waters of the sub-£2,000 buyer. Joy.

The Mk4 was built with a pleasing level of care, but that didn’t detract from how bloody dull it was. There were coffins more exciting. And with Honda and Ford knocking out amazing machined like the Civic Type R and the Focus RS, Volkswagen had to up its game. No longer was it the go-to brand for going fast, and this was hurting sales in a big way. It was also hurting the VW brand. Without anything exciting, Volkswagen was seen as dull and staid.

When Volkswagen said it would indeed be making a GTi version of its new Mk5 Golf, we took little interest. We just weren’t bothered. Until, that is, the MkV GTi appeared, and then, oh then we were very interested indeed. The MkV on which its based is not by any measure, an exciting car. Well built, reliable, safe? Yes to all. But fun? No. Not even close. And perhaps it was its dullness that made the GTi seem that much more special. It was a wild departure, a huge leap from the car on which it was based. Just like the original Golf GTi of ’75 was.

It was all there. The MkV boasted deep bucket seats with that tartan trim of ’75. It sat atop gorgeous diamond-cut 18 alloys, the honeycomb grille was skirted by the all-important red trim, the whole car sat 15mm lower than standard, though subtle skirt and chin treatment made it seem lower. It brought the MkV Golf to life. it was the first GTi for decades to celebrate its GTi-ness, to grab back into its past and take what was popular then to apply it today.

Of course, this being a GTi, there had to be more to it than looks. We were still hurting from the turgid 2.0 Mk4, and like a rescued puppy, we were afraid to give our trust. Volkswagen anticipated this though, and made sure the MkV Golf GTi was packing suitable punch.

Under the sleek bonnet lived a 2.0 petrol engine, with direct fuel injection. But not only that, it also had a Borg Warner turbocharger bolted to it, resulting in as near as dammit 200bhp. It was mated to a slick, tight six-speed ‘box (or six-speed DSG for those with really deep pockets). The chassis boasted fully-independent suspension, the brakes were upped, the suspension was stiffened and as such, the whole thing was and exquisite return to GTi form. Volkswagen had done it.

You might now, in 2019, scoff at 200bhp, but don’t. At the time, the Focus RS was only coughing up a smidge more. 200bhp was plenty of power, and in the case of the Golf GTi, it still is. It’s not about the number, it’s about how it’s used, and in the case of the Golf, it’s used well. There’s a bit of lag from turbo, but only a bit. After that, the power is fed to you with directness and with consistency, it’s the curve is progressive and easy to anticipate, it’s not sudden globs of power here, then nothing there.

This is the key to the GTi’s success. It’s a performance hatch that anyone can drive. Certainly, there are no driver aids in this car other than traction control. You don’t need a degree in Xboxology in order to set this car up. You get in it, you turn the key, you go. What you get out of the GTi is the result of how you work it, not hat the car’s computers decide. Even a timid and shy driver will enjoy the GTi, and the GTi will equally enjoy bring driven by them. But if you’re more spirited behind the wheel, don’t think of the MkV GTi as being soft. It’s not. Press on, and you’re in for a treat. The chassis keenly handles anything you throw at it with poise and determination. The grip is outstanding, the gearbox is crisp and perfectly weighted, the brakes respond with keenness that serves to only build your confidence. All the controls are so very well balanced, nothing takes centre stage by force. Instead, it’s a beautiful symphony of driving joy.

Of course, all this is moot if you go out and buy a lemon, and that’s a distinct possibility at this budget. You’re going to be buying a car with over 100k on the clock, there’s no escaping that.However, if it’s been looked after you have nothing to worry about – it’ not unusual for these cars to clock over 200k.

That’s what you need to be looking for in the service book. If it doesn’t have any of this, walk away, as it’s only going to end up biting you. Unless of course, you like throwing money away.

In terms of known problems, there are a few you should be aware of:

Then of course, there is the inescapable fact that you run the risk of buying a car that’s been covered en Evo-Stik and driven through Halfords. Avoid these cars like the plague. It might be a sign of us getting old, but honestly, you don’t need to modify a MkV Golf GTi. You just need to buy it, look after it, and enjoy it as Wolfsberg intended. Buying a modified car is a surefire way to enter yourself into a world of pain.

be patient, watch the ads and buy the right one, however, the 120k car with full history and only a few owners. Buy that car and you’ll be rewarded. The MkV Golf GTi is a masterpiece. It was in 2004, and it still is now. It still feels tight, modern and fast. But more than that, it feels like a GTi.