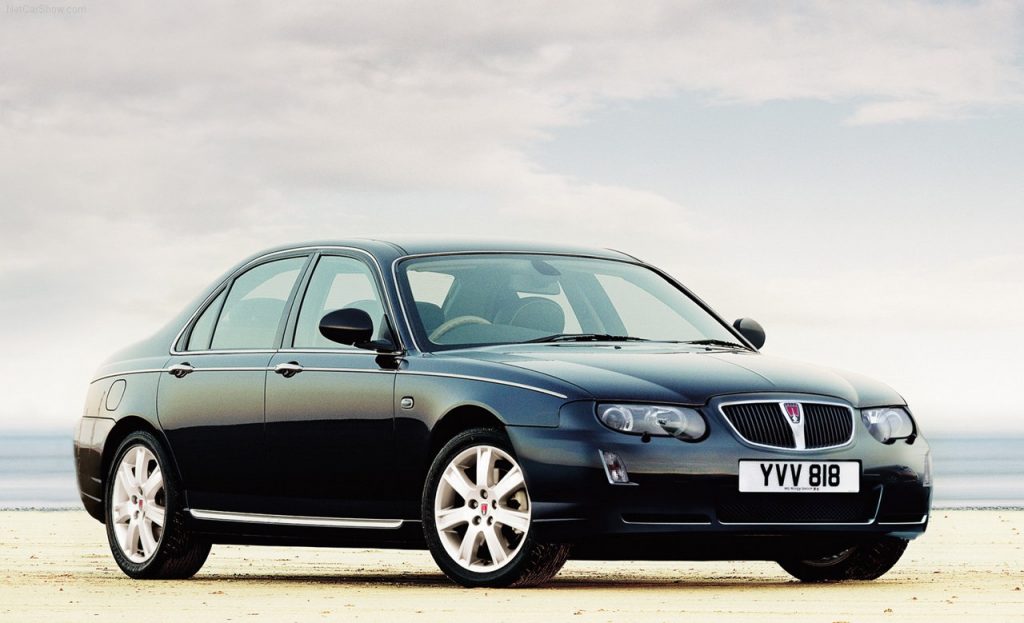 This website has been going for a long time. Years in fact. And here at N2G we love an old Rover, as evidenced by the 800 we own, or the myriad Rovers we’ve written about. Yet despite this love for the produce of Longbridge, we’ve never written about the Rover 75. And that’s weird. So we’re putting that right. Go and grab your tweed blanket and your boiled sweets, because stuff is about to get OLD. 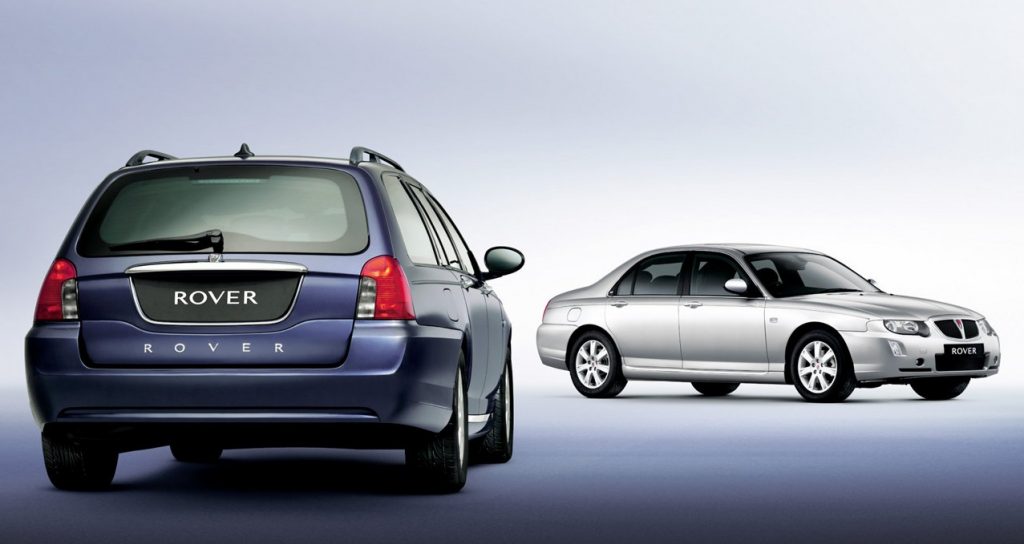 The Rover 75 was a big, BIG deal for Rover. It was born in a weird, but fantastic time for the stagnating British company. BMW was in charge of the purse strings, and BMW was feeling generous. When the big German automaker stepped in, there were concerns throughout all of Rover that it would be more of the same. More penny pinching, more cost saving, but even worse, it would be implemented with German efficiency. This wasn’t the case though. In fact, BMW CEO, Bernd Pischetsrieder, made it clear from the start of BMW’s involvement that he had complete faith in Rover’s ability to knock out cars, and as such, he wouldn’t be sticking his nose in. Instead, he would give the Rover the funding it had always dreamed of. Exciting stuff.

The Rover 75 was the first car to be completely built under this new, cash rich regime. There had been plans to replace the ageing 800 (one replacement project was codenamed ‘Eric’ which is brilliant). However, these plans evolved to also replace the 600. This was an odd instruction for Rover, given that the 600 was a relatively new car at the time. However, it was (much like the 800) a car that carried with it many Honda licencing clauses and associated costs. BMW didn’t want Rover to dance to Honda’s tune anymore, so told bosses to kill off the 600 and 800 and start afresh with a new car. This wasn’t contrary to the sentiment above. If anything, doing this freed up more money for Rover. 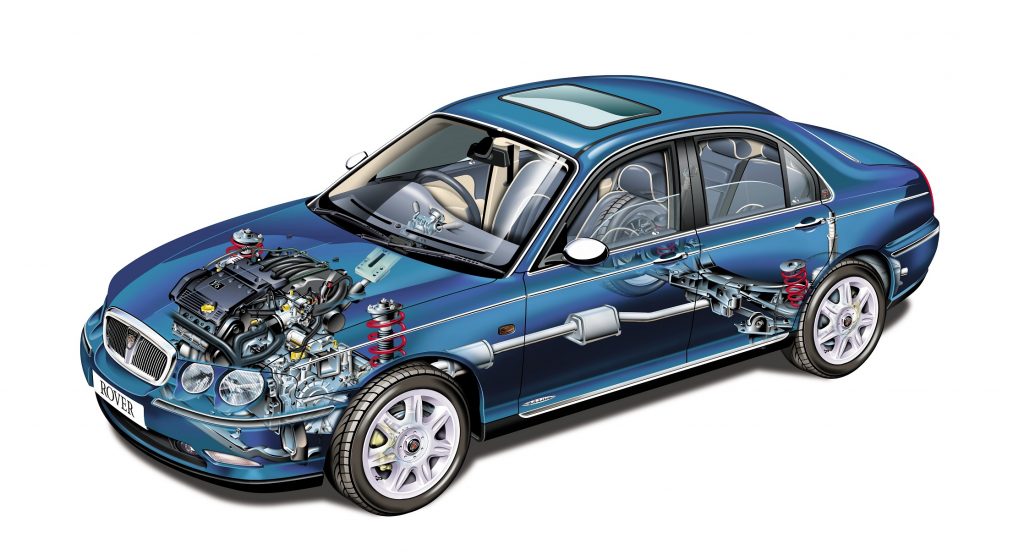 So then, Rover could built whatever the hell it wanted, without fear of being told they could only use spit and balsa wood. The plan was quickly put together, and it positioned the 75 as being a compact executive car. It would boast the KV6 as a flagship engine in both 2.0 and 2.5 guise, while the 1.8 K Series would open proceedings. it would have fully independent suspension, it would comfortably seat four, it would be, as was the trend for Rover, only offered in saloon guise. It would also bring about a new styling language that was modern, but with more than enough subtle hints to the past. The most notable being those that leaned on features found in the P5 and P6 models of old – cars that were arguably from one of Rover’s finest periods.

Richard Woolley was put in charge of the Rover 75’s design, having done brilliant work with the fresh and welcomed design of the 600. With the 75 he was given carte blanche to come up with a new design, and it was an opportunity he capitalised on. The 75 was and still is a handsome, purposeful-looking machine. The frowning quad headlamps gave it the mean face reminiscent of the P6. The tapering rear gave it a delicate look, despite being a large car. Inside, Wyn Thomas was put in charge and he did Woolley’s external look proud. The interior featured seats that were comfortable, but also that had a look of the seats of the P6. The dash, laden with wood veneer and chrome detail was a triumph of aesthetic and ergonomic design. The centre console section, with its trimmed ‘hoop’ over the radio etc was neat, but again full of retro flare. It was, and still is a lovely place to tumble through the miles. 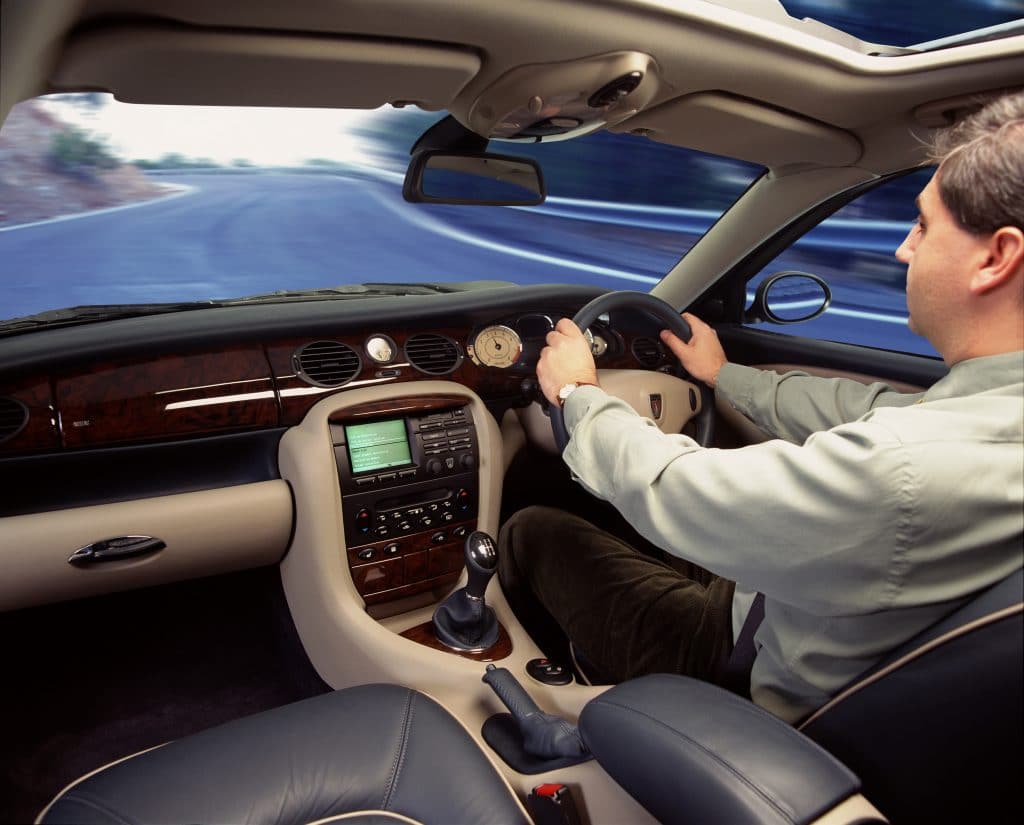 When the Rover 75 emerged from the design shed, it was a revelation. A car that at first glance, clearly had the gusto to bring the fight to the Germans amongst others. But then the problems came. many problems. None of which were the 75’s fault.

Firstly, there was the launch. Rover thought, quite rightly, that the 1999 Geneva Motor Show would be the place to do it. It is, after all, one of the biggest automotive events in the world. So Rover started planning for such, until BMW said no. Launch it in the UK, at the  Birmingham Motor Show, it said. Which was in 1998. This sent Rover into panic mode, and put a push on them getting the pre-production cars ready. In turn, this dealyed the production cars. And because the British press loved to stick the knife in, this was reported as being down to quality issues. That couldn’t have been further form the truth.

Then there was the launch, which was painfully sabotaged by, um, Bernd Pischetsrieder himself. Frustrated by the UK Government’s recalcitrance regarding a significant grant to update the Longbridge facility, he took to the stage at Birmingham (half an hour after he should have done) and instead of spilling gushing prose about the Rover 75, he went on a bit of a rant. He complained of the Government’s actions (or lack of), he questioned the sustainability of Rover, he spoke in tones that were not confident and inspiring. He quite effectively killed the mood in the room, that’s for sure. And obviously, the automotive and wider press had a field day.

Thankfully, when the 75 was handed to journalists for the car’s launch some repairing of reputation could be done. The car was largely praised for its build, its handling, its styling and its general take on the small executive sector. The car was good. Very good, in fact. It drove well, even in bargain basement 1.8 K Series guise. It was a glowing example of what Rover could do.

Though it wasn’t long before the 75 showed us what Rover could do. Head gaskets were an issue for the 1.8, obviously. There were a number of electrical issues too, and some of the feedback from customers regarding their dealership experience was less than glowing. But still, the 75 managed to shine through. Though for a brief moment in 2000 the 75s future looked bleak. BMW had sold Rover, which put the company’s future in question. Thankfully, the new owners, the now infamous Phoenix Four agreed to keep building the 75. Probably because the diesel had BMW’s engine in it. But whatever the reason, the 75 was safe. More than safe in fact. By leaving the party, Rover was free to, in 2001, launch the Rover 75 Touring. it had so desperately wanted to launch with an estate, but BMW said no. 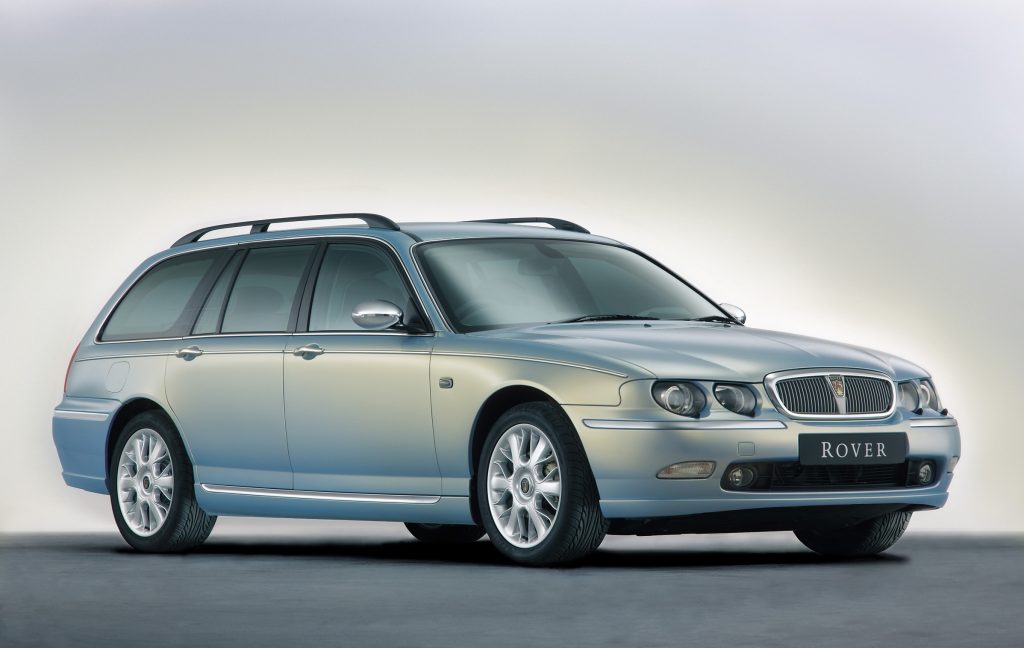 The life of the 75 was, from that point, short. Rover folded completely in 2004 and while the Phoenix Four had splashed out on a significant facelift for the 75 and the wider MG Rover range, it wasn’t enough. The 75, and all Rover production, came to a halt. A halt so sudden that half built 75s were left swinging from the assembly line machinery. Sad times. And it was sadder out on the roads. With no dealer network to support them, there was little public interest in the Rover brand. As such, prices were smashed into the ground just to get rid of them. But then, again, because there was no dealer network, the media was awash with tales of woe about cars that had broken. Cars that, if they were another model, nobody would care about. But because Rover carried with it this monstrous sense of morbid curiosity, the general public ate up the words and consequently, formed an unfair opinion of the cars.

Now though, in 2020, the Rover 75 isn’t a car without a dealer network. It’s just another old car, and that levels the playing field somewhat. They still have the stuffy, old man image, but ignore that. The 75 is a great car. If it’s on the road today, the chances are it’s been looked after. Furthermore, speak to any 75 owner and you’ll speak to someone who knows what their car is. Nobody buys a 75 because it’s just a car, they buy it, even now, because it’s a 75. Rover people are a passionate bunch. 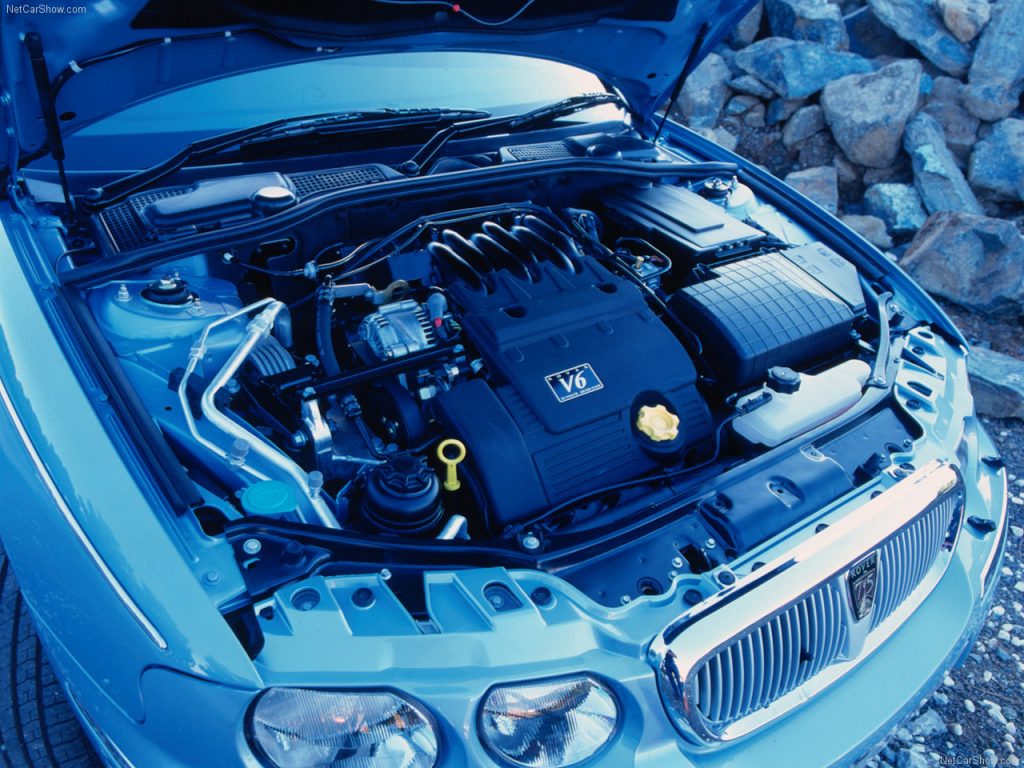 Why should you buy one then? Well, it’s one of the last cars to be built by Rover, and we mean that in the truest sense. This is more Rover than any other product of the time. But more than that, it’s just a good car. An estate will go on forever if you look after it. They handle well, they’re supremely comfortable, they’re easy on the eye and while Rover may indeed be dead, there is still wonderful support for them through specialists like Rimmer Brothers.

The KV6 model is great, but do remember that changing the timing belt is a MASSIVE job. The 2.0 V6 is neat, but not very powerful nor very good on fuel. The 1.8 turbocharged engine that replaced it in 2002 is much better. And don’t forget the 1.8 K Series. Yes, it had head gasket issues, but if it’s still on the road in 2020, the chances are it’s been seen to.

We love the 75 for many reasons, but even if you take all emotion out of it, the fact remains that the 75 was and still is a good car. As we mentioned earlier, they’re almost always owned by someone who is interested and passionate about the model, and that means the cars are look after. And when you’re shopping on a budget, you want a car that’s been cared for. The best bit, however, is that your two grand will get you the best examples out there. Leather, wood and chrome for days. Maybe even a Monogram model with special paint. It’s very much a buyer’s market.Though you need to jump in while you can. They’re getting thin on the ground now, which when combined with their appreciating modern classic status, will push prices up in time.

You get a lot of bang for your buck with a 75, and you get a car representative of an important time in the final days of Rover. A four wheeled glimmer of hope for what could have been…