Much like the Vauxhall Corsa SRi we posted the other day, the Meriva finds its way on these pages thanks to being an old company car of ours during our hellish Vauxhall sales days. And as is often the case with cars, it’s the ones you don’t expect that surprise you the most. When our SRi was taken away from us (someone sold it – bastards) we were handed the flip-out key of an 11-plate Meriva 1.3CDTi. Then a reasonably new car, we still scoffed at its apparent lack of street cred (do people still say street cred?) but we also took said key because, hey, what else could we do? We weren’t going to walk home.

To look at, this generation Meriva is certainly nothing special. It’s not offensive, but nor is it dynamic or dazzling. It is just a small MPV. Nothing more, nothing less. However, when you get up close and personal with the Meriva, and when you start to use it, you soon develop a fondness for it, backed up by ongoing amazement. Much like the Swiss Army Knife, the Meriva packs a LOT of function in a very small space. Looking back, the Meriva simply wasn’t celebrated enough. Vauxhall should have put some serious cash into the marketing, because it was and still is a brilliant little car. How brilliant? We’re thinking about buying one as our family car. That brilliant. 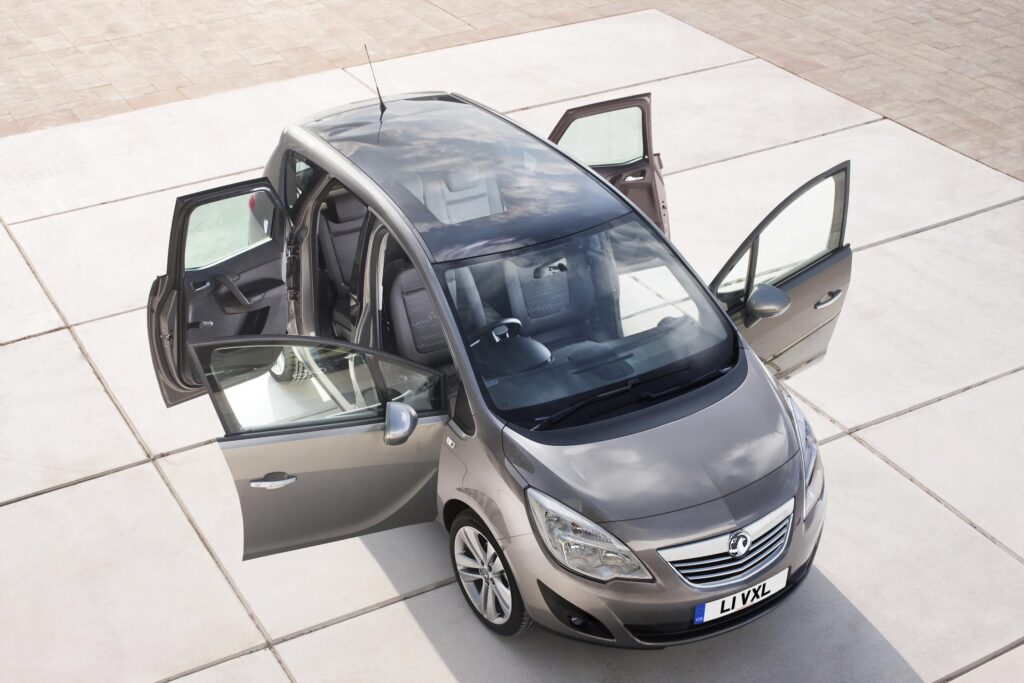 First of all, let’s talk about the doors. As in the means of ingress and egress, not the Jim Morrison kind. You’d think that in the mundane MPV sector, a door would be a door. But that’s not so. In the case of the Meriva, the designers at Luton decided that the doors should open to near 90 degrees. Clever, as it made access much easier, and as the Meriva was targeted firmly at people with many child seats, or people who were 900 years old, this was wise. But they didn’t stop there. They also made the rear doors open ‘backwards’. In doing so, it makes access to the rear seats an absolute doddle. Incredibly clever. But not at the expense of safety – the Meriva was given top marks after EuroNCAP boinged one off a wall. Not only was the rear door arrangement still strong, the Meriva came with Isofix, airbags and electronic stability control as standard.

Once inside the Meriva, you’re in for a treat. The Mervia before this one was made of spit and washing up liquid bottles, akin to some hideous home attempt at a Blue Peter project. The 2010 version was a word away from that. It’s a curvy, solid, well made cabin. The plastics are of a high grade, the fit and finish is excellent and the seats are comfortable and made from decent cloth or leather – fancy. There has also been some actual design applied, as evidenced by the swooping lines and clever storage options. Credit to Vauxhall, they didn’t phone this in. How clever? Well, up front betwixt driver and passenger is a natty three-tier storage system. The handbrake is electric, meaning there is no intrusive handle getting in the way. The seats are adjustable times infinity and on top of line models, you get a full-length panoramic roof. Meanwhile you have the three rear seats. The middle one can fold away, and on the FlexRail system, the two outer rear seats come together and in turn, create more space for their occupants. Very, bloody, clever. And then there’s the 400 litre boot, with added under-floor storage. 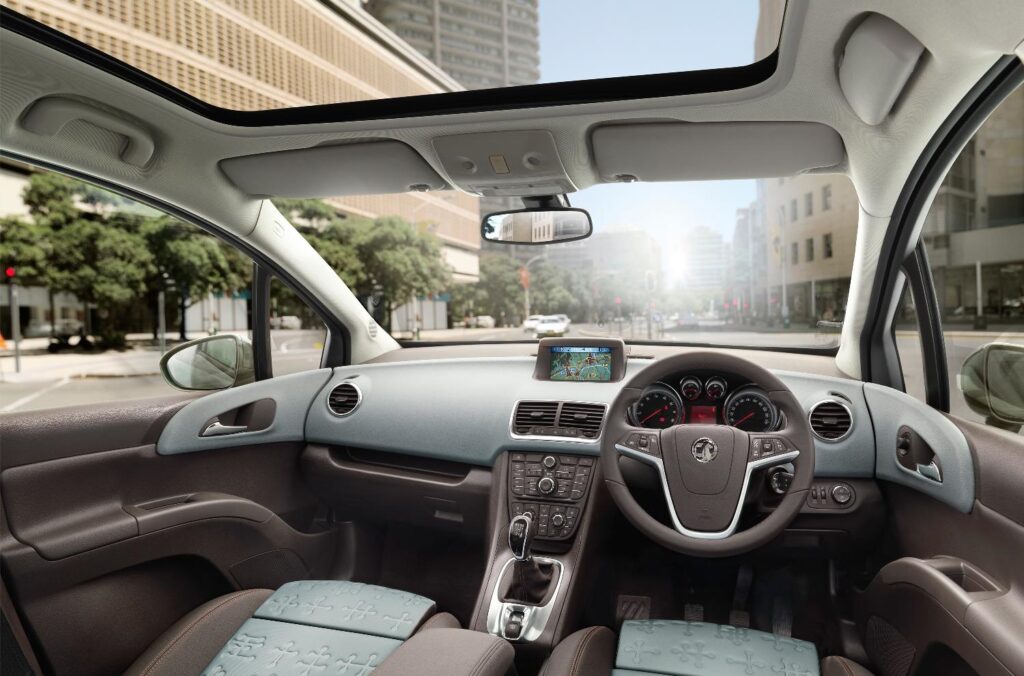 It all feels quality. It feels like a car that people have put actual, real effort and care into. This car was a passion project for many of the people involved, it must have been, otherwise it wouldn’t have been this good. Cars this intelligent and well thought-out don’t happen without some passion.

On the road, the Meriva is a sensible family car, not an apex hunting racer. However, it’s composed and its fun to bimble along in. There is a surprising lack of body roll, and the steering is well-weighted and direct, while the brakes are ample. The Meriva feels safe and surefooted, thanks in no small part to the comparatively long wheelbase.

Engine-wise, ours was a meagre 1.3CDTi with 75bhp, and while it wasn’t going to win us any street races, it did seems to last about four years on one tank of diesel. 0-62 was glacial, but that’s not why you’re buying one. It was fine in everyday traffic, and thanks to being a six-speed, it was happy in the motorway. There is also a 1.6 diesel, but these haven’t dropped into £2,000 territory yet.

If you prefer your fuel to be ignited rather than compressed into action, there was a 1.4 petrol with 100bhp and a 1.4 turbocharged petrol with 120 or 140bhp. Both frugal with combined cycles into the 40s, they’re also a bit nippier than the diesel we had. 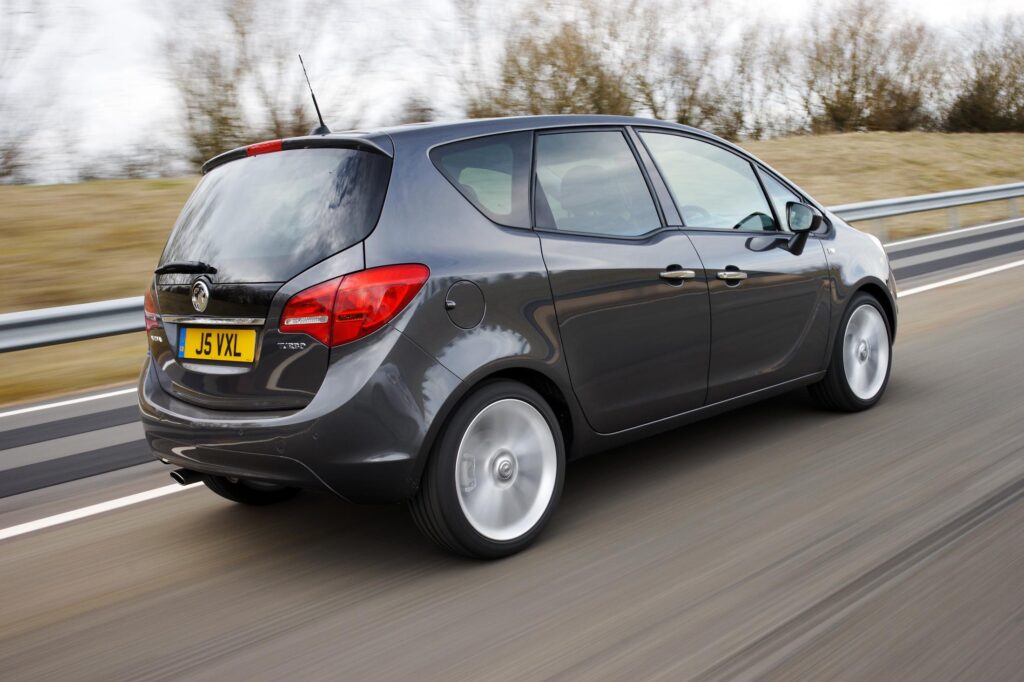 If you want a decent family car that will work for you in terms of the function and benefit, this is it. It is such a clever, well engineered, fun little car. Get an SE and you’ll get cruise and air-conditioning and all that goodness. It really is all the family car you could ever need. A truly overlooked gem in an oft bland and subdued sector of the market.