There are a lot of old cars, but there are few as universally cool as the Mk2 Volkswagen Golf. And we’re not talking about the GTi version. No, the Mk2 Golf as a whole has come into its own now. Even a humble 1.3 with small bumpers, tall suspension and little steel wheels will cut a dash in today’s automotive landscape. The Mk2 Golf was a perfect mid-size hatchback. It was practical, it was comfortable and it was easy on the eye. It was also pleasant to drive, it wouldn’t require the sale of kidney when a service was needed and of course, being a Volkswagen, the build quality was and still is exceptional. If you can find, say, a Vauxhall Astra or Ford Escort from 1985, it will feel like you’re driving a biscuit tin full of loose spanners by comparison. Yes, the Mk2 Golf has truly stood the test of time, but without breaking the bank.

Okay, a nice, unmolested GTi 16V in Oak Green will cost more than a used Gallardo, but such is the ’80s hot hatch market. A tidy ‘every man’ Golf, however, can be had for well under two grand. It might be nudging into the territory of ‘project’ ever so slightly, but even so, your two grand will get you a road legal, presentable Mk2 Golf with ease. And you should buy one. They’re only going up in value, so now is the time to get on board. But also, the Mk2 Golf is just a good old car. Buy one and look after it and it could quite easily be daily transport. But cool, retro daily transport. And who doesn’t want to be both cool and retro? Exactly. 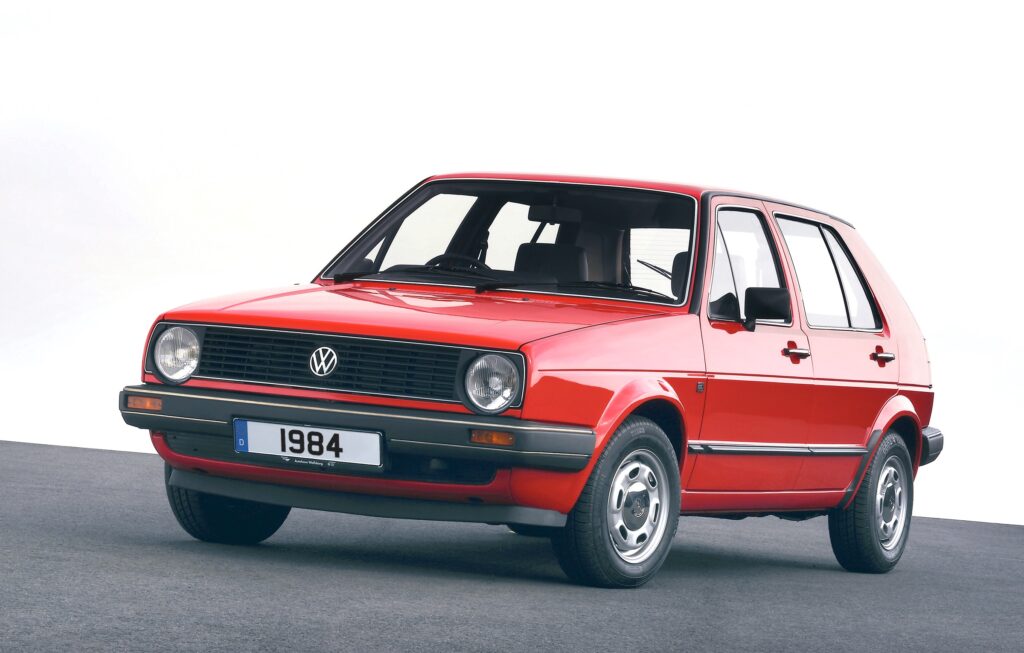 The Mk2, which was introduced in 1983, took the success of the Mk1 and improved upon it. The Mk2 was bigger and more refined, and from the off it was a hit. In terms of the dimensions, it was some 170mm longer than the Mk1 and 55mm wider. That might not seem a lot when you look at a ruler, it it made a hell of a difference. These extra mm’s allowed the Golf to breathe a bit. And in doing so, the Mk2 became a far more attractive prospect to many buyers who had previously dismissed the Mk1 as being too small.

The Mk2 Golf was also a car that brought with lots of technical advances. This vehicle generation saw the introduction of the catalytic converter (1984), anti-lock braking system (ABS, 1986) and power steering. The Golf was also available with all-wheel drive for the very first time (syncro, 1986). Additionally, the engine in the GTI was the first Golf engine with four-valve technology (1986). Clever stuff. 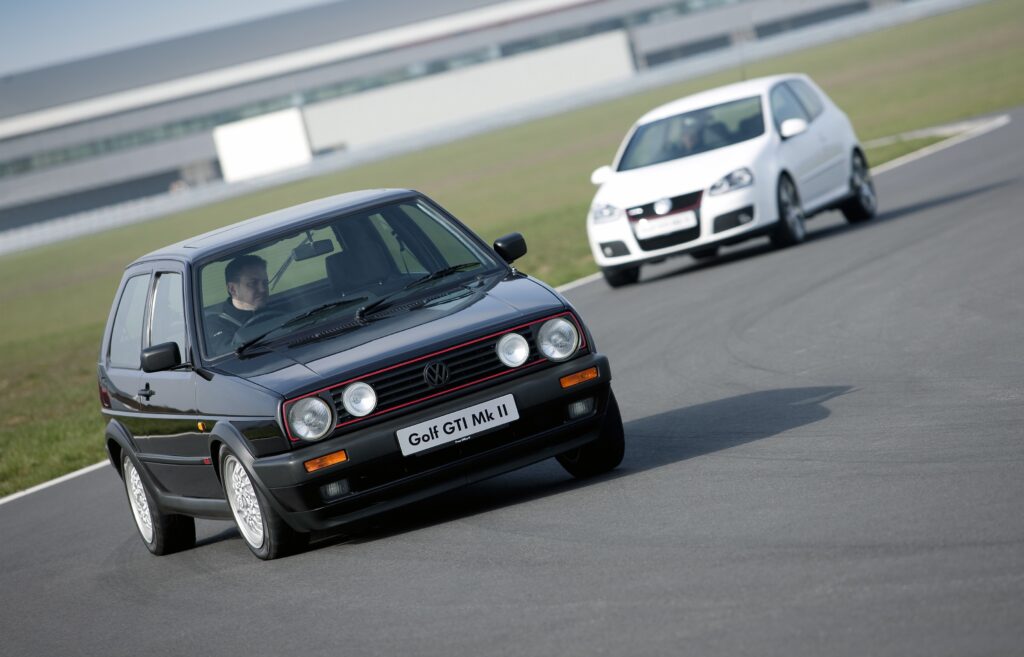 The Mk2 Golf was a hit from the off, especially here in the UK where we fell in love with the quality and practicality of it. It was proof, from Volkswagen, of what serious development could mean for the humble hatchback. In 1985, What Car? awarded the Golf Mk2 1985 “Car of the Year”, even though it had actually been launched here the previous year. It sold well in Britain, peaking at more than 50,000 sales a year by the end of the decade. Not bad at all. But then, why wouldn’t we love it? It was the perfect hatchback for many.

That was the joy of the Mk2 Golf. It was all things to all drivers. If you needed a basic hatch, a three-door 1.3 Golf would do the trick. If you were particularly fertile, you could have it in five-door guise. You could have it with a bit more power as a 1.6 or a 1.8, and you could have it as an auto or a manual. It was a brilliantly versatile machine. And it was and still is an icon because of three little letters. G. T. and I.

Yes, when it comes to a Mk2 Golf, the one everybody wanted was the GTi. Initially available as a 1.8 8v with 110bhp, then as of ’86, we had the option of the ‘holy grail’ 1.8 16v with 137bhp. Annoyingly, North America was given a 2.0 16v – we weren’t. But it’s fine, the 1.8 16v was ample, and still manages to hold its own as a decent performer, helped in no small part by the GTi-specific bigger brakes and lowered suspension.

Of course, there were other Golf Mk2 models like the Rallye, the G60 and the Cross Country, but they’re not nor ever will be found in the waters of Not £2 Grand we’re afraid. 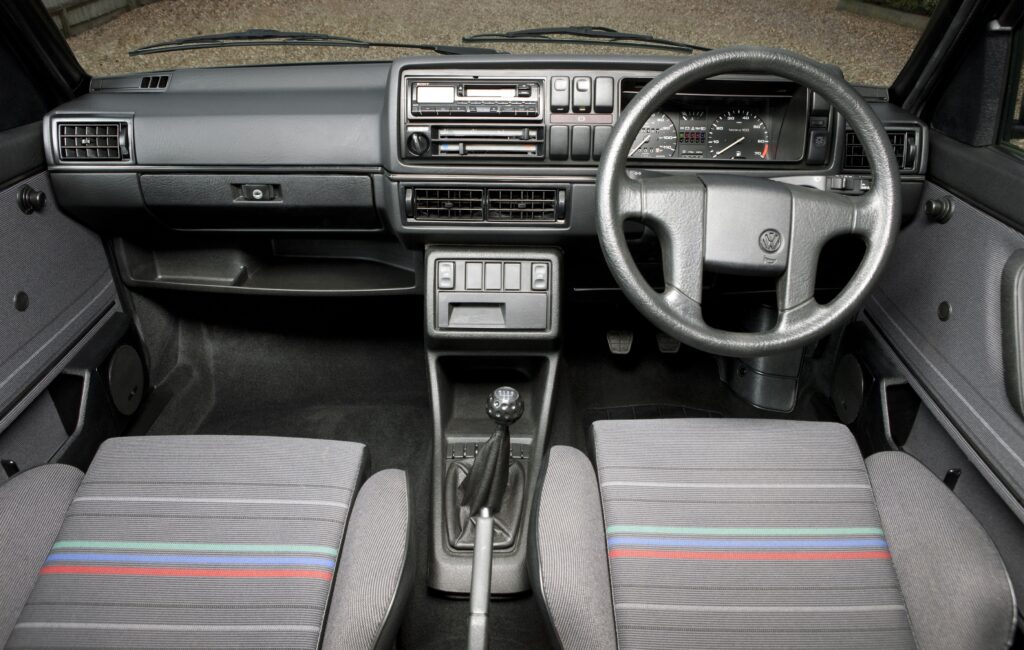 So what is your two grand going to get you? We hate be the bearers of bad news, but it’s not going to get you a 16v GTi. Well, it might, but it will be an absolute wreck that needs all the welding in the world. You might just scrape in with an 8v GTi, but again, it won’t be a car to write home about. In all honesty, at this price point it’s best to take the GTi out of your crosshairs, as it’s not going to happen. Instead, look for a base 1.3, 1.6 or 1.8. Post ’89 cars should be ‘big bumper’ models (earlier cars have thinner black plastic bumpers) if you want that look, but they do tend to be more popular, and as such, prices are higher.

The same goes for early Type 19 models – you can identify these by the inclusion of quarter-lights in the front windows, and the wing-mirrors sit further back on the door. Also, at the rear, there is now VW emblem on the lower panel. The scene kids love these early cars, so again, prices are high. Aim for a late ’80s model though, and you should be able to get a decent example. It won’t be the most exciting, but it should be a good base. And that’s important… 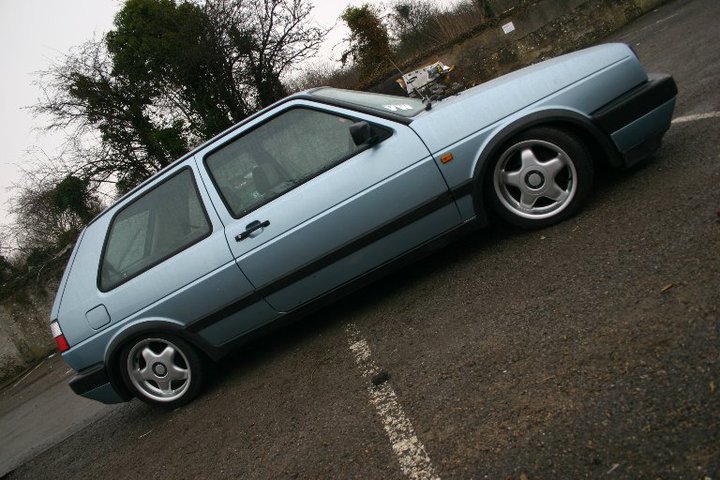 That there is our old Mk2 Golf 1.6 Driver. ’89 on an F. We paid a mere £300 for it, with loads of tax and MOT left. And while the days of finding one for that money are long gone (this was some ten years ago), the fact remains that building a Golf into your own style is still very doable. The Mk2 Golf is, for many, THE modifiable car. And despite being a bona fide ‘oldtimer’ these days, there is still a huge aftermarket in place to serve owners and enthusiasts. The gold you’re looking at there, as it stood, owed us about £600. The wheels were £125, the coilovers were £120, there was a stereo upgrade, some ‘jewel’ rear lights and and some HID headlights (bit naughty today, but not back then). And we could have gone a lot further. We were looking at VR6 power, bigger brakes, roll cage, all that jazz, because it was and still is all easily doable and with a huge network of support to aid you. 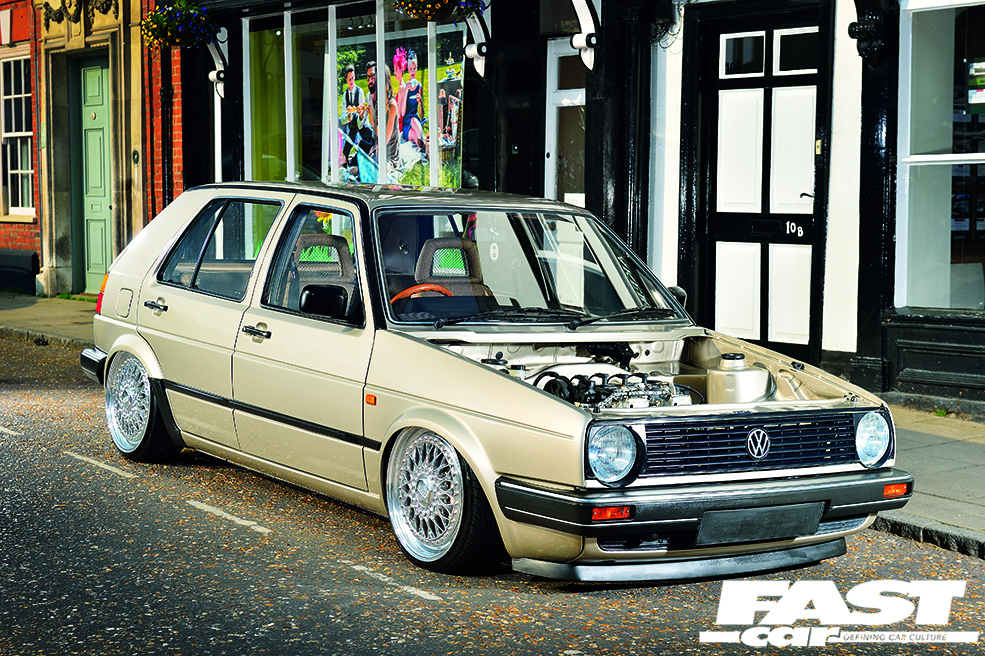 As you can see from this great feature from the guys over at Fast Car the Mk2 Golf is a car dripping with potential. If you’re keen to build a car, but you want to do it yourself, the Mk2 Golf is the car for you. There is so much out there in terms of products. There is so much inspiration. There are so, so many passionate businesses and individual owners. You can’t fail. The Mk2 Golf is the ultimate base for person vehicular expression. It may well be the ‘people’s car’ but that doesn’t mean you can’t make it unique.