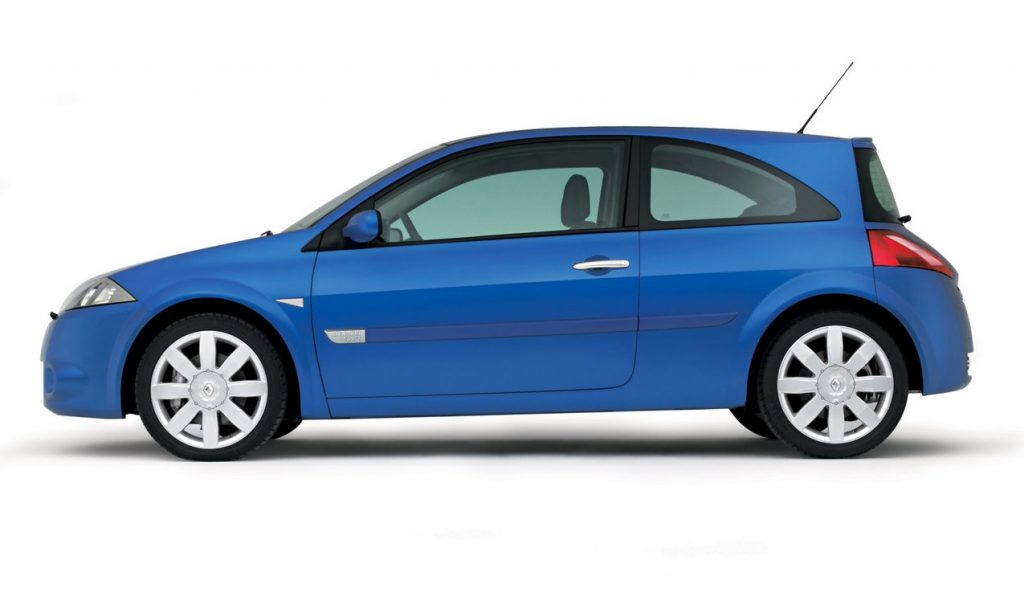 We recently made a list (because the internet bloody loves lists) of five hot hatches you should buy if you like hatches that are, um, hot. On that list was the mighty Renault Megane RenaultSport 225. A car famed for having dat phat badonk-a-donk, and for also being pretty damn good to drive, too. Admittedly it’s only bobbing in the waters of £2,000 territory, so you might have to haggle a bit, or wait patiently for one that starts with a price starting with 1. But either way, it’s close enough, so here it is.

The RenaultSport name is to Renault what ST is to Ford, VXR is to Vauxhall and R is Volkswagen. However, the French take the idea of going fast a bit more seriously than their rivals. A Focus ST is cobbled together in the same factory as the rest of the Focus range. The RenaultSport cars, however, are not built alongside their dull counterparts. Instead, they’re built in a dedicated facility in Dieppe. That makes these cars a bit more special to our mind. They’re more focused and dedicated than their peers. We like that. The Megane RenaultSport we’re looking at here was introduced in 2004, you’ll remember, as that’s when we were bombarded by the ‘shake that ass’ advertising campaign for this second-generation of Megane. 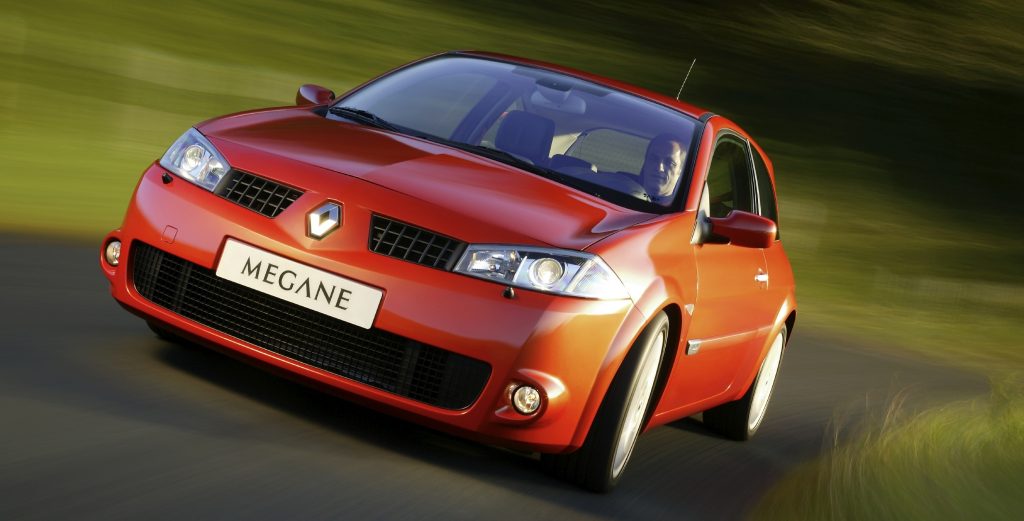 There were a few variations of the Megane RenaultSport. However, we’re looking at the most common here, which is the 225. In the real world, this is what you’re going to find. It’s also the one you want. There are more hard-nosed versions, but they’re a bit too much for daily use. There was the Cup, which had a blinding chassis with stiffer springs and up-rated shocks over those of the stock 225. It was and still is a riot, but it will also remove your teeth when you drive over a leaf. Sub optimal. Then there was the F1 version, which was a Cup but with Brembo brakes and Recaro buckets and a bit more power. Good fun, but they’re not in budget yet. And there was also the 175bhp diesel version, which was actually pretty good. The power delivery was decent and if you kept it on boost it was a riot. However, this is a hot hatch, so we prefer our liquid dinosaurs to smell like petrol.

When Renault launched the Megane RenaultSport, or RS to save us having to keep typing RenaultSport, the marketplace was  brimming with quality hot-hatchery. Ford had the new five-pot, turbocharged Focus ST. Volkswagen was just about onto the MkV Golf GTi, which was and still is an astonishing car. Honda had the sharp Civic Type R. And Vauxhall was just about to give the world, and low-rent weed dealers, the Astra VXR. If Renault was going to succeed in this market, it would have to work hard. Especially as, unlike the rivals, the Megane had no previous form as a hot hatch. 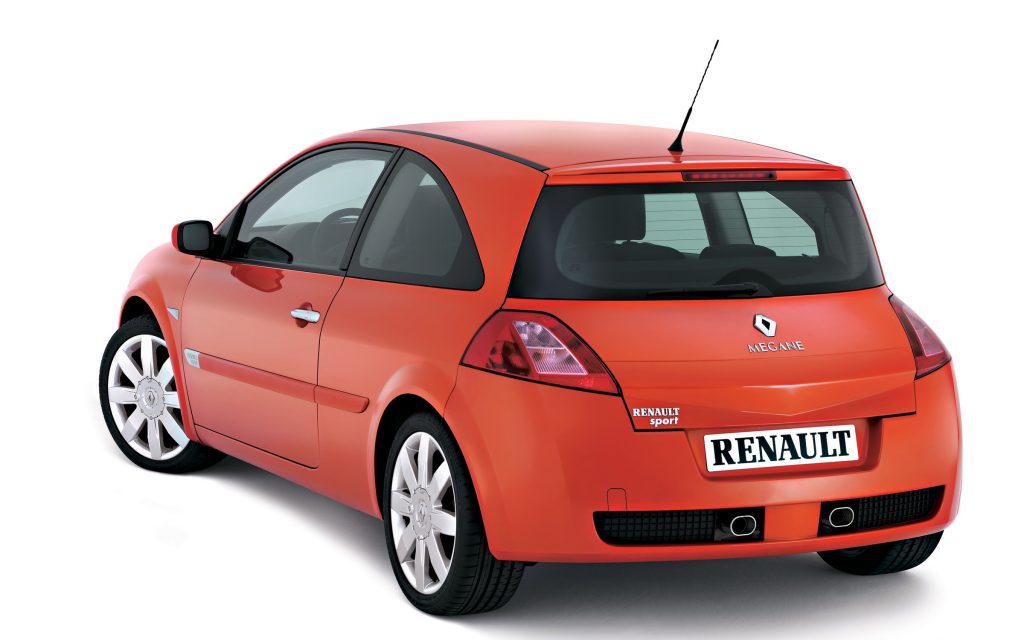 Happily, Renault didn’t just make a good car. It made a great one. The obvious care and with it, seriousness of building the cars in a bespoke facility were evident as soon as you sat in the RS. But that’s not to say the car itself was serious and careful. Far from it. The RS was and still is a lunatic. For starters, there is the undeniable fact that when the French aren’t being in a mood, they know how to make a good chassis. The Megane RS boasted trick suspension, incorporating double-axis strut suspension with independent steering axis at the front. In real speak, it means the RS can put the power down with out torque-steering into oncoming traffic. The steering, which was woeful on the normal Megane, was sharpened up considerably for the RS. The electronic system alters assistance based on speed, and as such, the steering always feels well weighted and direct. It’s perhaps not as sharp as a Type R, but it’s good and doesn’t leave the driver wanting. 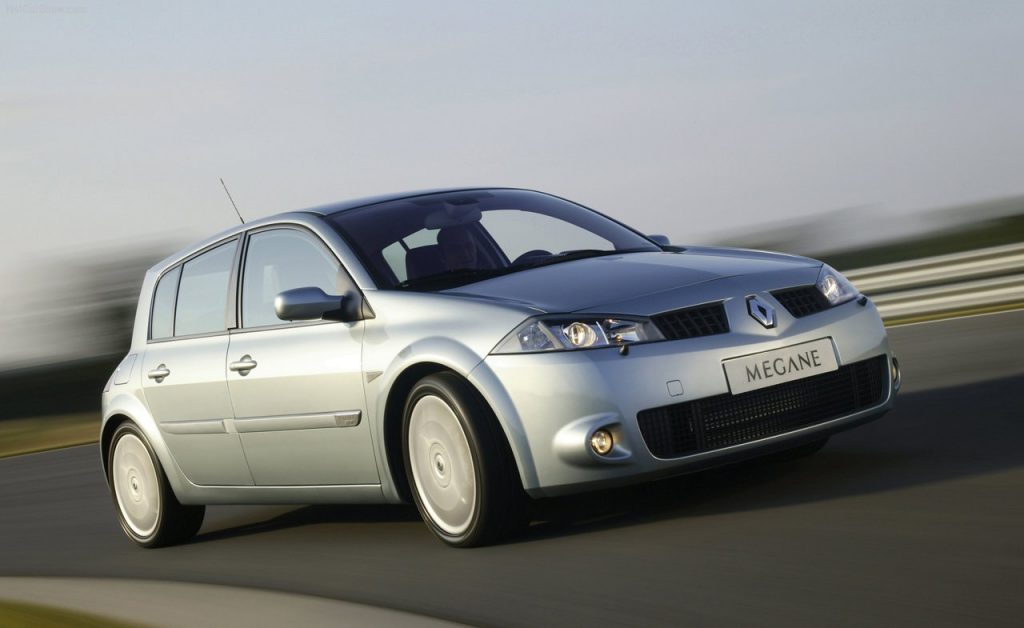 But what about the important bit – the engine. It’s a 2.0 DOHC unit with a clever twin-scroll turbocharger bolted to it. The twin-scroll design means that there is minimal lag. In fact, at the time, Renault was keen to tell buyers that most of the engine’s torque was available from 2,000rpm because of this feature. As such, get the Megane RS on a winding road and you can leave it in fourth all-day long. You’ll be right in the power band with enough low-down and top-end grunt to tackle whatever the road has for you. The neat exhaust system, if in good condition, offers a raspy, terrier-like growl as you push through the revs, and while the six-speed transmission can lack some feel and directness, it only takes a few miles to get used to it and perfect your change technique. 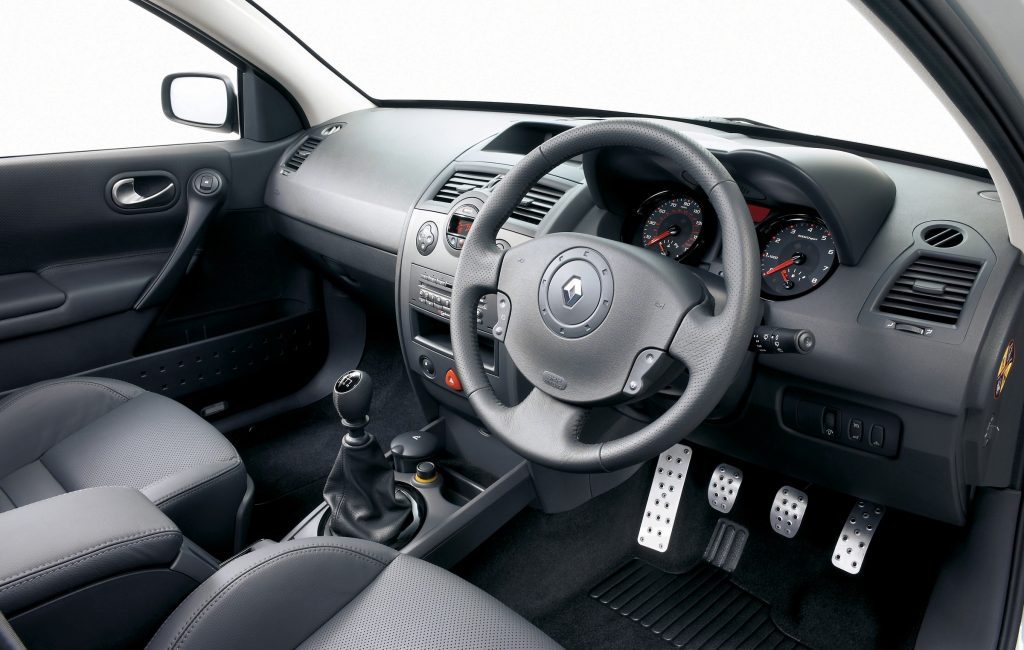 Inside the Megane RS it’s… adequate. The drilled pedals and foot rest offer about the only flair. Other than that, it’s a pretty drab affair. That said, the plastics are decent, the controls all fall to hand, the ‘credit card’ key system is cool (as long as it still works) and the ‘thruster’ style handbrake makes us smile. That’s about your lot though. It’s very… safe in there. However, it is comfortable, there is room for four adults (just) and the driver’s seat as plenty of adjustment along with the steering column itself, meaning you should be able to achieve the perfect driving position. Forward visibility is good, though rearward visibility is crap due to those chunky C-pillars. 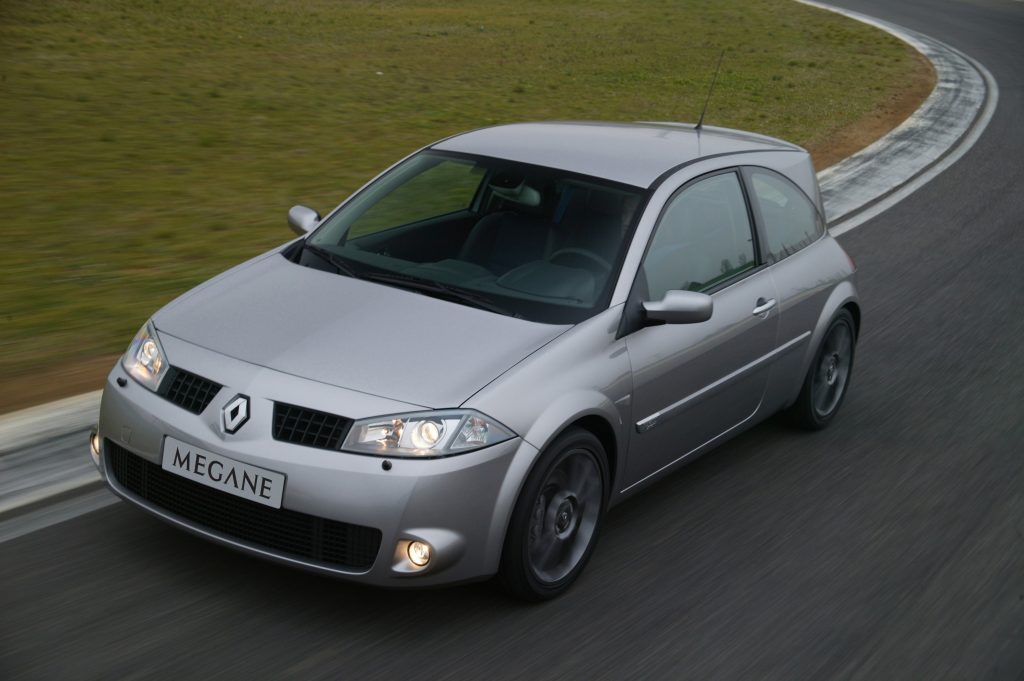 Then of course, there is the way the Megane looks. When it was first launched, that ridiculous rear end looked like it would age about as well as a fine… milk. However, we have to stand corrected, as it seems to have stood the test of time. The Megane II, on which the RS is based, still looks fresh and modern. The design is angular and dramatic, and that makes it stand out. We like that. If you’re buying a car for performance reasons, it’s nice if it can back it all up with some solid looks, and the Megane does that. of course, that weird notchback rear means the boot isn’t as big as you’d think, but on the flip side, this is a hot hatch. You’re not buying it for load-lugging. You can get the weekly shop in there, so it’s fine. And speaking of practicality, the Megane RS could be bought as a three-door or five-door. So if you’re the prod owner of functional testicles, you can still have the Megane RS as a family car. Kind of. You children will be permanently jiggled by the suspension. Babies like it when you jigg… oh, they don’t? Moving on. 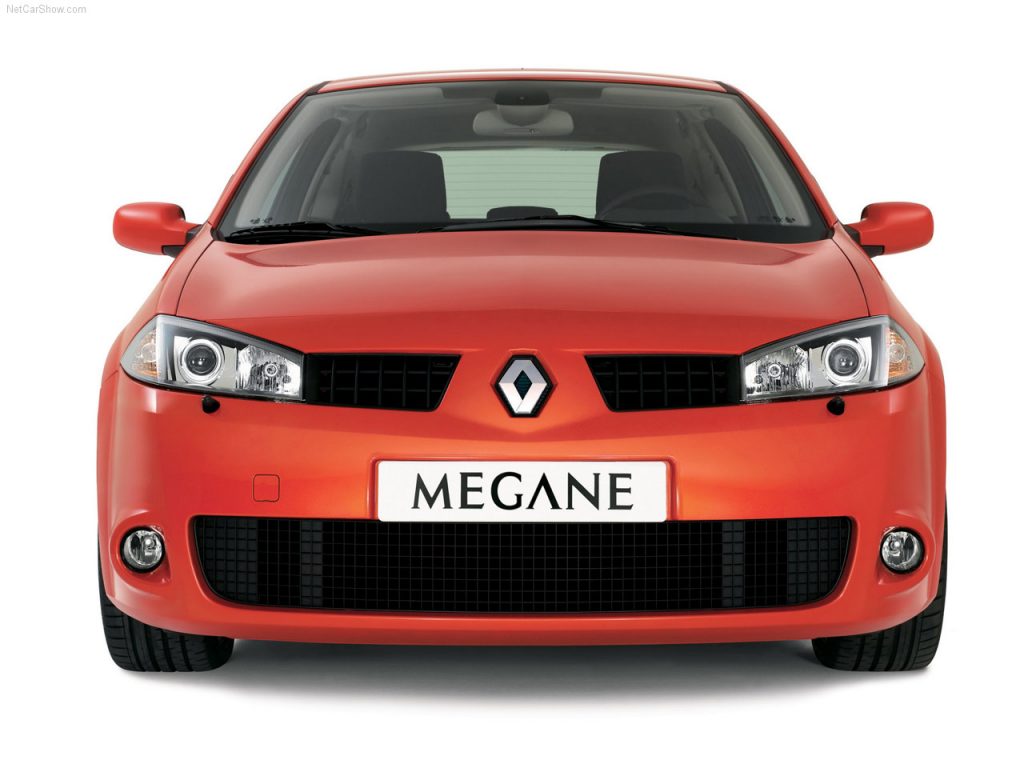 And while we’re on the tangent of practicality, it would be worth talking about safety. The good thing here is that this is a Renault, and they’re are very, very safe cars, even by today’s standards. Renault was the first manufacturer to obtain a five-star EuroNCAP rating with its Laguna. The Megane II, a few years later, achieved the same. You get airbags aplenty – the three-door gets eight, the five-door has ten – you get side impact protection and of course, you get Isofix anchor points. If you stack your RS into a wall, you should be okay. Don’t stack it into a wall though. Please.

We adore the Megane RS. It’s a proper, well-made, fun hot hatch that deserves to be enjoyed. The Cup version, pushes things to another level, but as we say, it’s a bit harsh on the road. As such, the RS 225 is, for us, the way to go. It’s the perfect hot hatch, civil and easy to use when you need it to be, and an absolute riot when you push it. 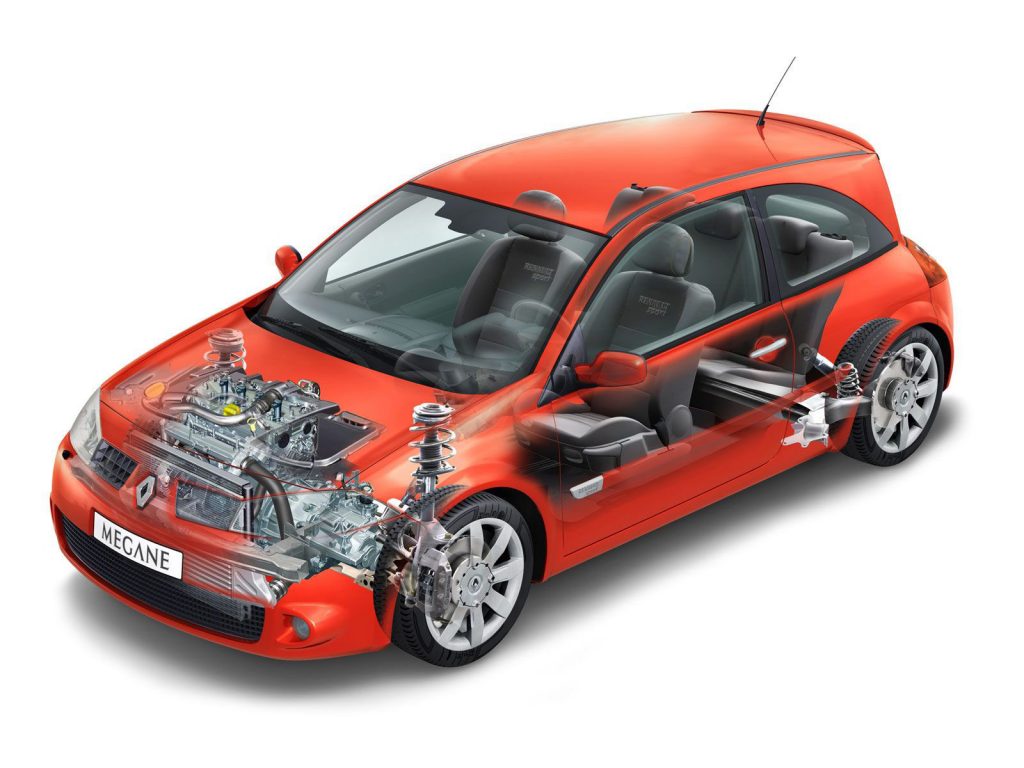 In terms of buying one, our advice would be to shop around and try and get one that hasn’t been dicked about with. These cars are out there. Don’t settle for something with patchy history, mismatched tyres and starship mileage. Get a decent one, treat it to some premium rubber and maybe some bolt-on brake upgrades (EBC discs and pads, say) and that’s it. That’s all you need. it will be one of the most exciting, engaging and fun hot hatches you can buy.