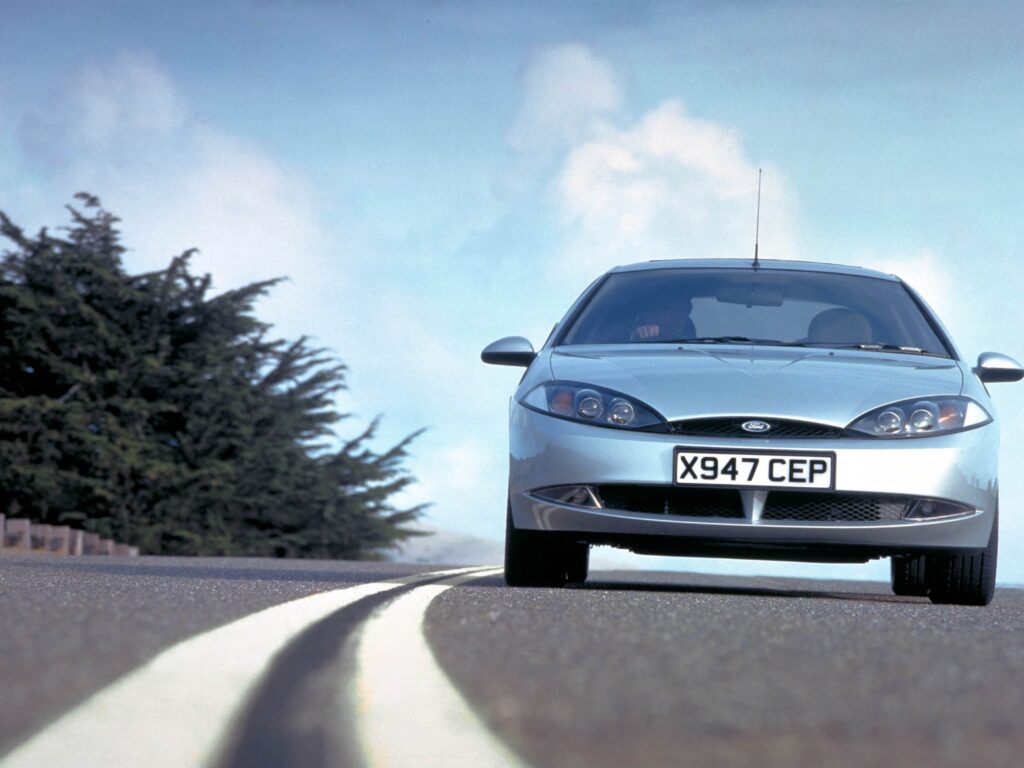 We’ve done the Ford Probe, so to speak, and now we’re following up with another Ford coupe from the ’90s that nobody was willing to admit liking. Despite actually being fairly decent. Hell, the Probe was based on the MX-6, which was no bad thing. The Cougar? It’s just a Mondeo coupe. And while the Mondeo was no race car, it was a good machine to drive. That was the key to its success in many ways. Yet when we were presented with the Cougar, which was in essence a stiffer, better handling Mondeo with less of a sales rep look, we snubbed it. Why? Because we were busy playing our favourite broken record. You know the one – Now That’s Not What I Call a Capri II. It’s a banger. Or at least is was in the ’90s, because it was all we could listen to whenever Ford tried to build a coupe. Why were we so utterly fixated on getting a ‘new’ Capri? Don’t get us wrong, the Capri was good fun, but it wasn’t so remarkable that it should have set the benchmark for all Ford coupes going forward. 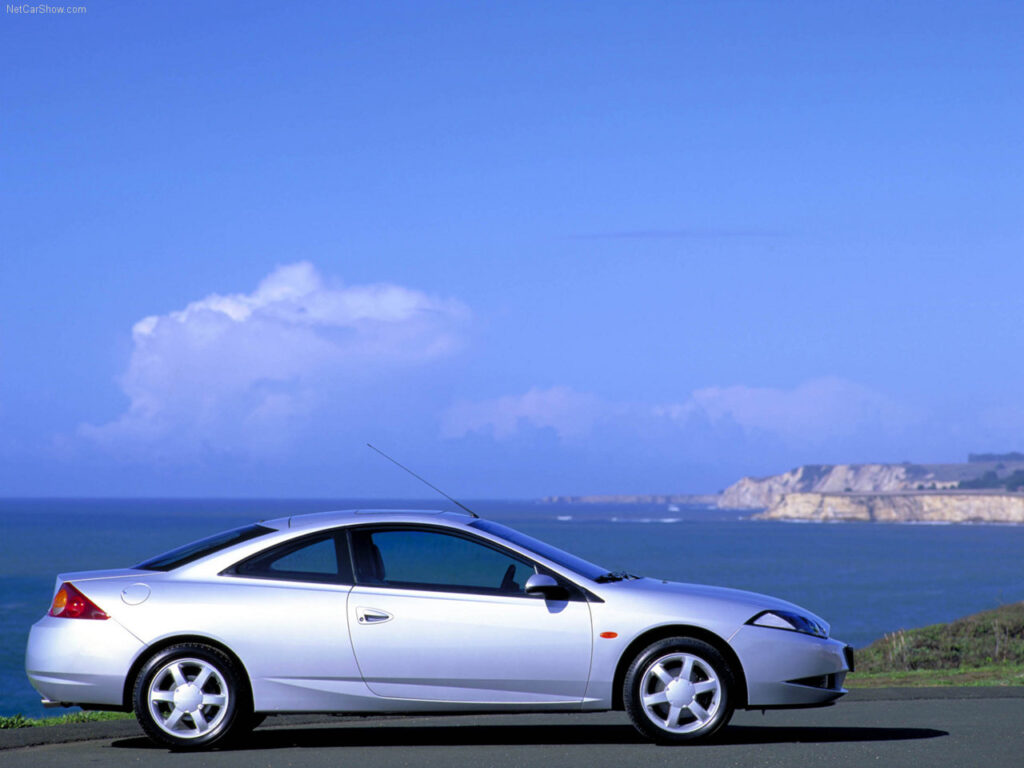 Anyway, the Cougar. We like it.  We’ve always liked it. It was one of the first cars to adopt Ford’s bold ‘New Edge’ design language, the same language that gave us the Mk1 Focus, in fact. It was a long, well-proportioned machine. The lines were angular and carried purpose and a little bit of aggression. It was a brave, strong design. It still cuts a dash today, some twenty-two years on. Christ. Twenty-two years. No, 1998 was not that long ago. No. NOPE. WE’RE NOT LISTENING.

Technically speaking, the Cougar was the follow-up to the Probe, but really the two weren’t at all linked. The Cougar was a purebred, designed entirely in-house and based on a trusted Ford platform – namely the Mk2 Mondeo. Admittedly, the second-generation Mondeo wasn’t the most dynamic of cars, but it was still decent. The ST24 proved that with a V6 and suspension tweaks, the Mondeo could be quite a force to be reckoned with. As such, Ford had to be onto a winner with the Cougar, right? The familiar, usable underpinnings of the Mondeo and the bold, forward-thinking ‘New Edge’ design. What could go wrong? 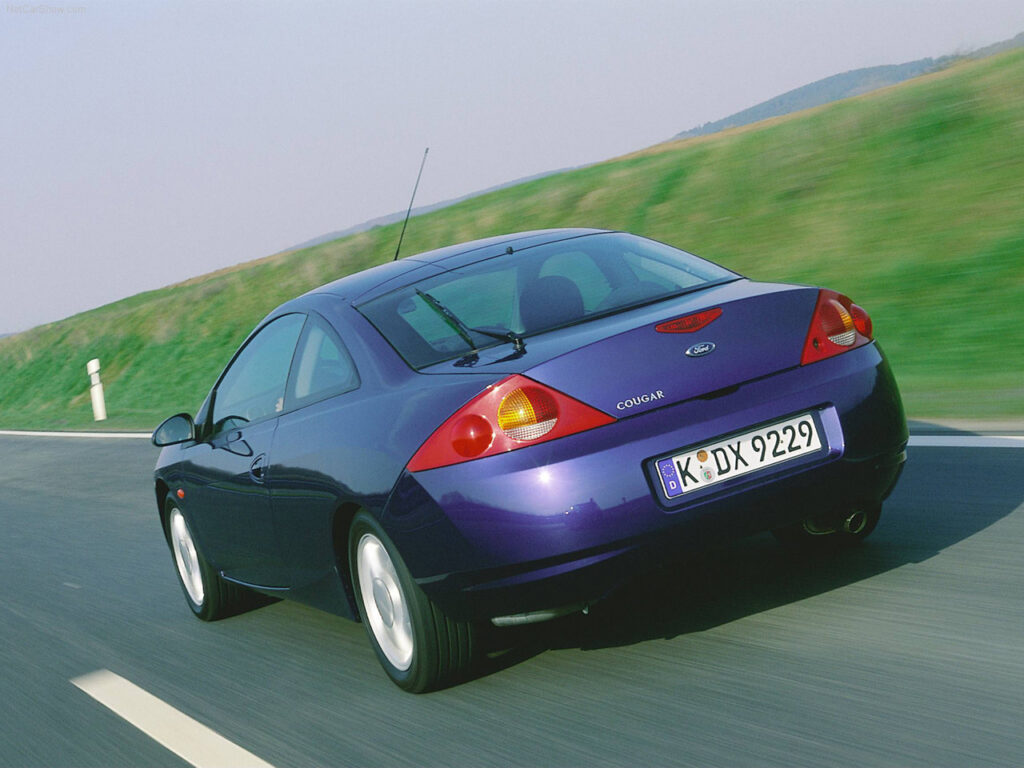 When the Cougar landed in late 1998, the crowd went… mild. Ford had high, high hopes for the Cougar. It needed a car in the coupe segment, what with the popularity of cars like the Celica, the 406 Coupe, the ageing but still popular Calibra. Ford was losing sales, and in the case of the Calibra which was to the Cavalier what the Cougar was the Mondeo, it was a bitter pill to swallow. Ford thought the ‘New Edge’ design shift would wow people into showrooms. It had to, right? The Cougar, Ford knew was a good car to drive. The fresh design would surely seal the deal for buyers?

It did not. In 1998 we were still trying to get our heads around the leap from the pudgy late-model Ford Escort (a car that television’s Jonny Smith absolutely adores) to the – also ‘New Edge’ – Ford Focus. We didn’t have the mental capacity to deal with the Cougar, too. So we didn’t. 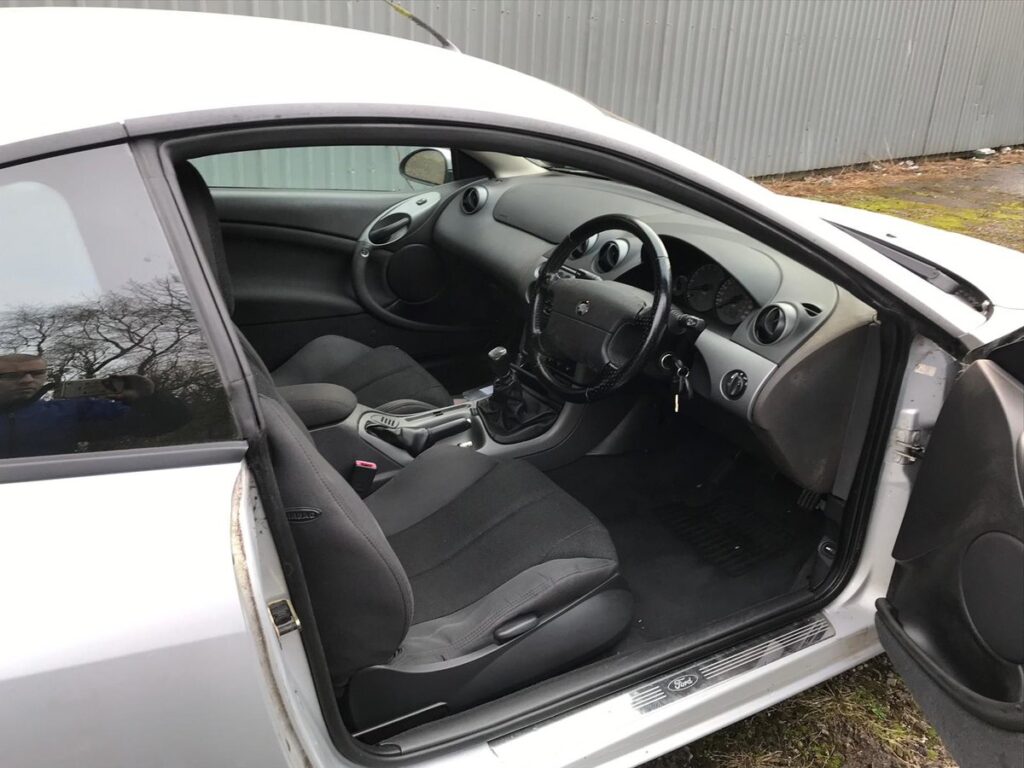 The motoring press, bless’em, did their best to sway us, but we were having none of it. It drove brilliantly, they told us. It was remarkably practical and had acres of boot space, they harked. The V6 was an absolute joy, especially when paired to the five-speed manual, they typed into the column inches. It wasn’t enough.

Ford, licking what by then were some deep wounds, pulled the plug on the Cougar in 2001. We haven’t had a Ford coupe since, Mustang notwithstanding. But as the ‘stang is a historic model, it doesn’t really count.

The Cougar, through no fault of its own, killed Ford Europe’s coupe dreams. Killed ’em dead. Until they died from it. Twice.

The Cougar’s story doesn’t end in 2001 though. Like a fine wine, the Cougar got better with age. It matured, or should we say, the automotive landscape did. And as such, the Cougar didn’t seem so at odds with every other car on the road. Now, in 2020, it actually manages to look modern. It is, make no mistake, an excellent piece of design.

And it’s still cheap. Filthy cheap. And this where you’re waiting for us to caveat this. Tell you that you can get a cheap one, but it’ll be a 2.0 with cloth. And yes, that’s true. But your £2,000 will also get you a full-loaded, leather-filled, 2.5 V6 X Pack model if you shop around. You can buy the best for buttons. It’s criminal how cheap they are. 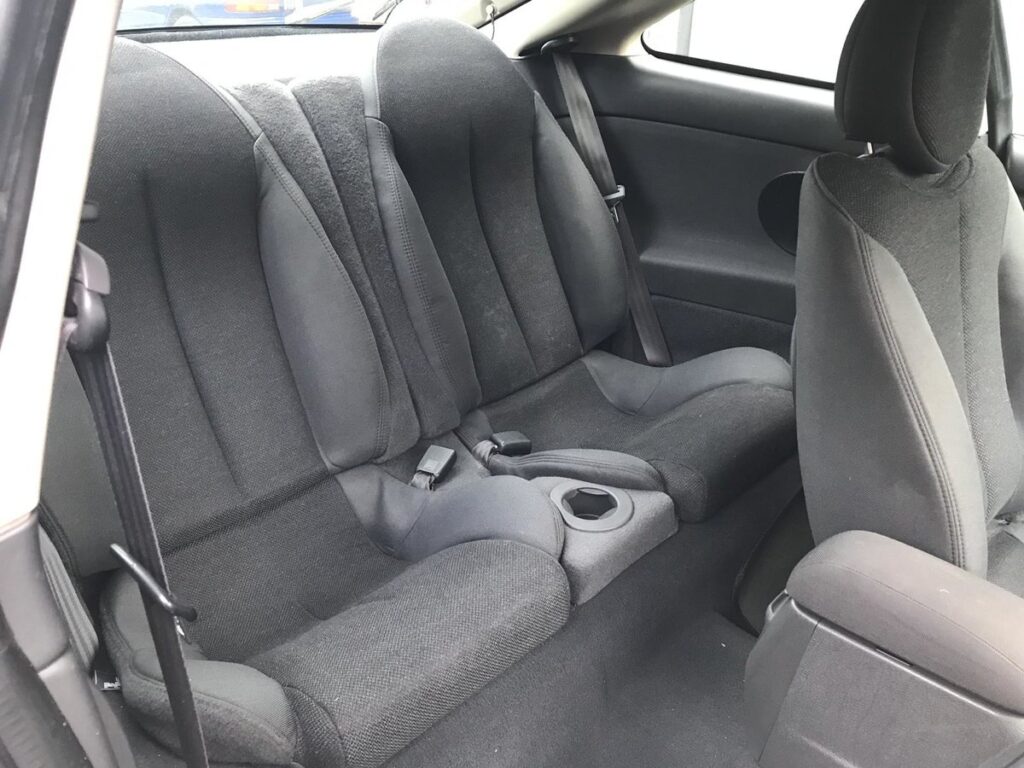 But should you buy one? Well, we’re not your dad, so we can’t tell you what to do. But we will. So yeah, buy one. The 2.0 16-valver is a decent everyday driver with 130bhp, but if you want to go a bit quicker, you’re going to need the 2.5 24-valver that packs a more potent 168bhp. Though be warned, if you drive it everywhere like your head is on fire, it will bankrupt you – it’s a thirsty lump. And obviously it will cost more to maintain, so there’s that to consider.

You’ll also need to consider the weirdly passionate Facebook Cougar Groups. First of all, don’t get them mixed up with groups of feisty older ladies, unless that’s your bag. Secondly, take them with a pinch of salt. There’s a distinct ‘Cougar car is best car’ vibe. It’s good, but the best? Nah. 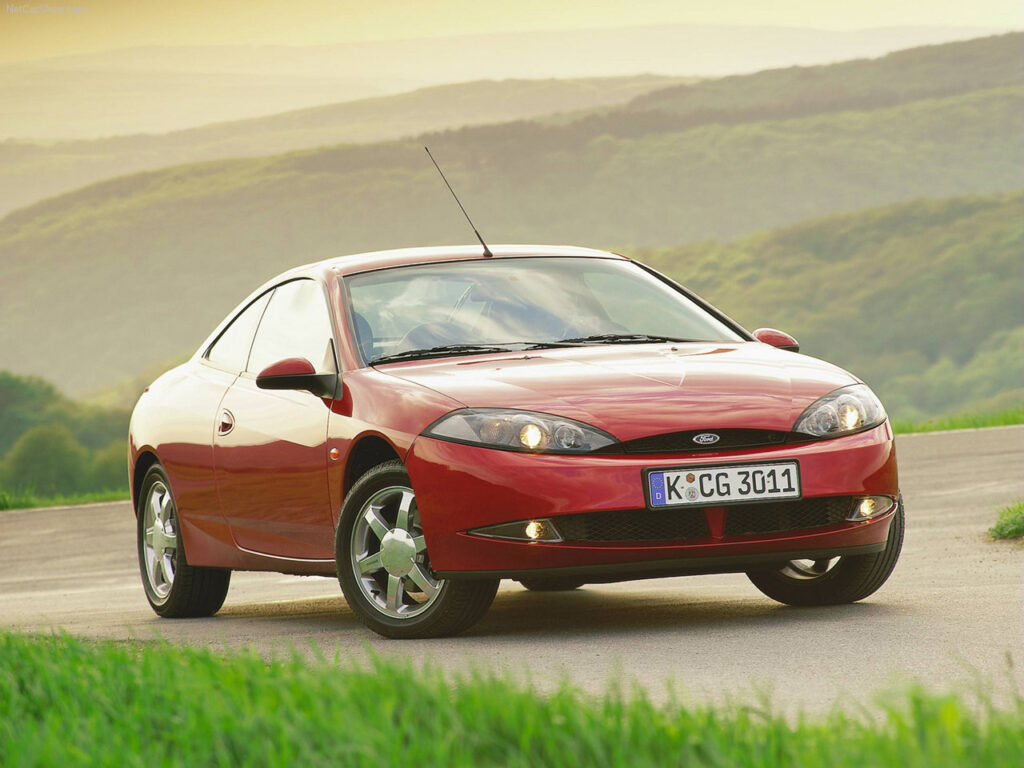 Buy one though, and much like its Calibra-shaped rival, the Calibra, you’ll find yourself with a surprisingly practical, cheap to run, handsome, comfortable coupe that still, some twenty-two years on, turns heads. The Cougar was bold, brave and daring. Now, it’s nestling into the territory of being a genuine modern classic, and rightly so. It deserved more love. But late is better than never…