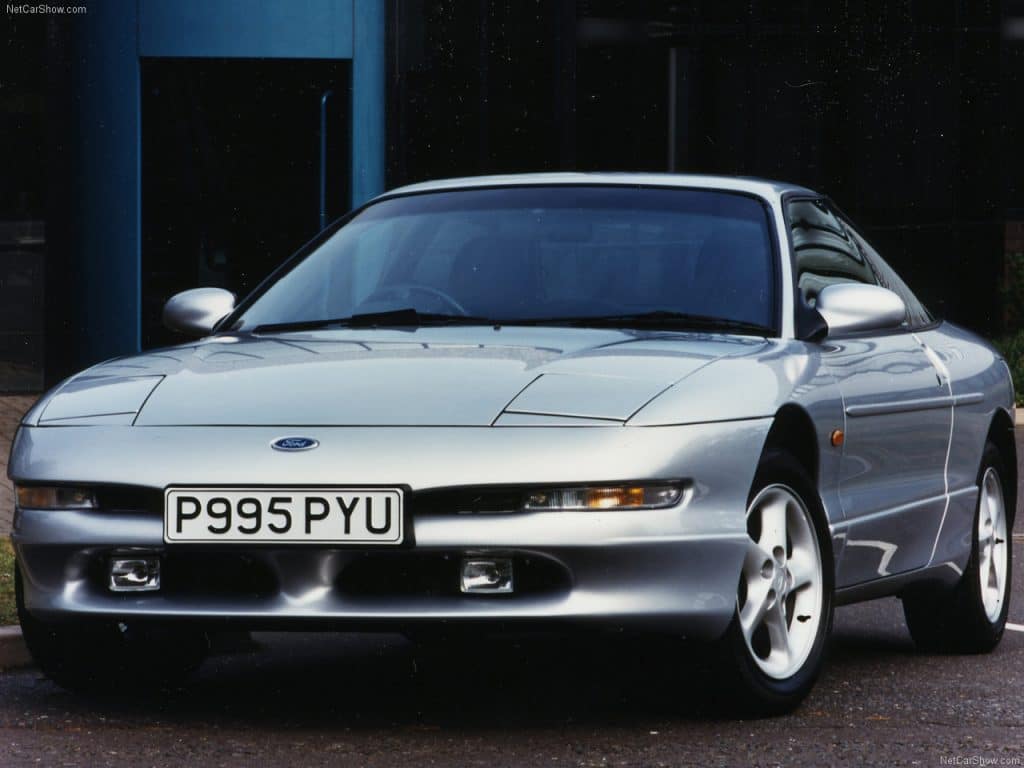 Yep, this is really happening. We really are recommending the Ford Probe. A car we all loved to mock, and that we all loved to hate. And why? Because it wasn’t a Ford Capri. That’s just plain absurd.

The Capri was – and before you sharpen your pitchforks, we’ve have five of them – not a very good car. The Capri would rust as soon as it saw a puddle. It was slow, even in 2.8 guise. It was thirsty. The driving position was toss. And despite being rear-wheel drive, it had a greater propensity toward under-steering into a ditch rather than spinning out before you got to one (the old ‘you need a bag of cement in the boot’ pub talk is utter bollocks).

The Probe was leaps and bounds ahead of the Capri. It was the first car birthed by the early ’90s sexy time between Ford and Mazda, two powerhouses in car building. Hell, the probe was loosely based on the MX-6. And that was a fine, fine automobile. But it didn’t have pop-up headlights, so that’s a few points lost.

Plus, the Probe is one good looking car. It’s a bit American, but then it is a Ford. Plus, the Probe was built for the U.S market. The one we got over here is actually the second-generation Probe. The first was an ungainly thing, clearly penned without the help of Mazda.

The second-generation car was a triumph from an aesthetic point of view. It was sleek and unfussy. Elegant almost. It looked nimble and light. Just what you want from a sporty car. But it wasn’t a Capri, so we didn’t care. Because Essex, and burnouts, and Fido Dido stickers. And the name was silly. or the source of flashbacks if you’re a Texan farmer with Mulder and Scully on speed-dial.

To be fair, Ford didn’t help matters. While it never officially said the Probe was a replacement for the Capri, it also wasn’t quick to say it wasn’t. So we, as a car-buying public, did the rest. And because it wasn’t a Capri, and because we had super-glued our rose-tinted specs to our heads, we pooh poohed the Probe.

The reality is that when the Capri assembly line ground to a halt in 1986, it did so for a reason: we had stopped buying it. In the ’70s and early ’80s the Capri was a huge, HUGE seller. But as the ’80s progressed, Ford’s lineup swelled with cars like the XR2i, the XR3i and the RS Turbo.

We didn’t need the Capri, so we stopped buying it. That’s why, when Ford stopped building it, it didn’t replace it with anything. It would have been an expensive lesson in futility. Yet despite this, when the Probe hit dealerships seven years later, we said no. Because it wasn’t a Capri. Because it wasn’t the car we had actually grown bored of all by ourselves. Much like a toddler, we had no god damn idea what we actually wanted. So we just made a lot of noise instead. One or two of us may have needed fresh pants.

Again, Ford made things harder with the somewhat optimistic pricing of the Probe. This all-new machine, based loosely on the Mazda MX-6, cost millions and millions of dollars to develop. As such, it was never going to be a cheap car. But it was as near as dammit £20,000. In 1994. That was insane. That’s pretty much £28,000 in today’s money. Or nearly-new Mustang 5.0 money, ish. Now there’s a car not a million miles away from the Ford ‘European Mustang’ Capri. But we digress.

The price was too much, so even the minority who cared not for the Capri were put off. In the end, Ford discounted the Probe heavily, but it was too late. We’d made our minds up. Which is a shame because, remember, the Probe was a good car.

In terms of engines, you had a choice of two. Both were from the Mazda stable, and both used a double overhead cam design. In the case of the 2.0, it was pretty standard fare. In the V6 though, that DOHC applied to each bank of cylinders. You don’t need to be Rachel Riley to work out that means it was a quad cam. Like a Ferrari. Or a Scorpio, to keep in on brand.

The 2.5 V6 was a smooth beast. Refined, quiet and perfect for some grand touring. Which was handy, given that the Probe was far more a GT car that it was a sports car. Plus, the V6 only had 160bhp and a paltry 217Nm, so it wasn’t exactly blistering. You could hit 60 in 8.5 seconds and go on to 137mph, should you have the desire.

If you want to know how to tell the difference, the V6 normally had five-spoke alloys and leather trim, while the 2.0 had three-spoke alloys and cloth. Though a lot of time has passed, so either model could be pink with blue spots and full plaid re-trim by now. So it’s probably best to open the bonnet, just to be safe.

On the road, the Probe was… average. Despite being made for the Americans, the ride was harsh. Space was limited, especially in the back where only Anne Boleyn could get comfy. The fit and finish wasn’t great either, which is a given seeing as it’s a Ford. Though at the time, we’d have hoped the Mazda influence may have sorted that out. It didn’t, nor did it sort the questionable external build quality. Some panel gaps you can’t get a blade of grass through. Others, you can drive another Probe through.

So why, then, should you buy one? Well, like it or not, the Probe is a classic car these days. And also, it’s rare. We’re not saying that it’s going to skyrocket in value, but we’re also not suggesting it won’t. As a car, without the mention of Capris, the Probe was okay, good even. It was introduced to the world in wrong way, at perhaps the wrong time, and with a sister car that was much, much better. But nobody remembers the MX-6. But they, we, remember the Probe. It’s a little spike of intrigue on the automotive timeline. A curio, if you will. Plus, it had pop-up headlights, and that, in anyone’s book, is cool.