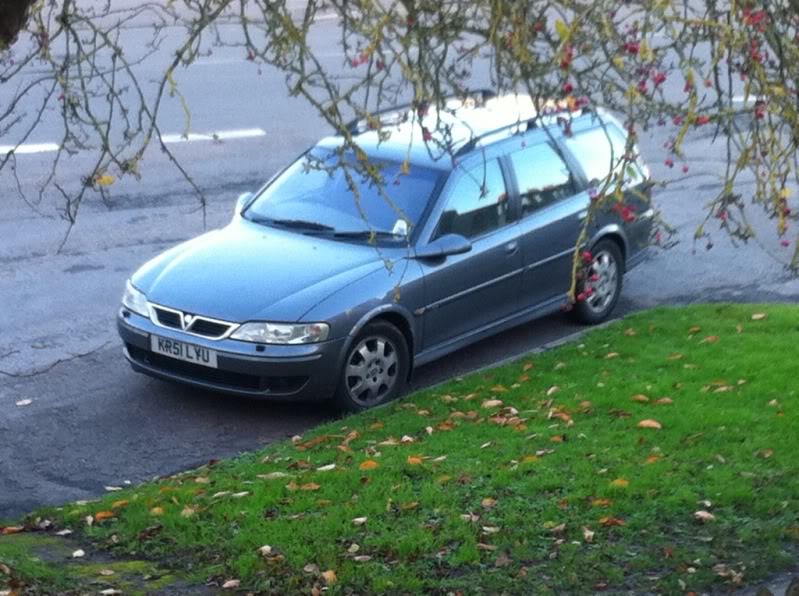 People love to get all up the face of the Vauxhall Vectra. It was described as being dull, as being ugly and as being generally rubbish. To those people, I say shut thy face. I’ve had three Vectras, and I liked them all. There was my first one, a humble LS estate with a diesel engine. It wasn’t fast, it wasn’t sexy, but it did have a Playstation and a DVD player, so it made living in it slightly more bearable. No, really, I did that.

Then there was my 2.6 SRi. Again, it was an estate, but this time is was petrol-powered. And Christ on a bike was it fast. Astoundingly so, actually. I loved it, but in the end my (now ex) wife forgot that we had to pay a little thing called VAT on our wedding bill, so I had to sell it. Annoying.

While all that was going on though, there was another Vectra in the background. Namely KR51LYU, a 2.2 CDX diesel estate. Bought by my mother’s fella, it was their pride and joy for years, replacing the Sunny. And much like the Sunny, I was set to inherit it. A free car, dear reader, is a free car.

Magnificent, I’m sure you’ll agree. And I say that without the slightest whiff of irony. For a Vectra, it was. My mum’s chap liked to hunt out the right car (within the Vauxhall range), and this was it. It had low miles, it was the more powerful and desirable 2.2 diesel, it had ALL the toys and it came direct from the management fleet, meaning it had a nice discount, too.

He and mum used it for years until it was replaced by its, um, replacement – a Vauxhall Insignia (which I ended up with last year). The thing was, I didn’t pick up the Vectra’s keys right away. In fact, I only picked them up when my other cars failed me. Though picking them up meant I also had to recommission the car, so full service, new tyres, MOT, all that jazz.

There it is, languishing with my also dead Zodiac. But it was fine, it was soon back on the road. Plus, it made sense to spend money on a known devil, rather than buy another questionable heap.

So, I had a functioning car, and that made me happy. It was quiet, it was comfy and the diesel engine was full of torque, plus it did about 55mpg. I was – and I take no shame in saying this – over the moon with it.

So obviously it very quickly found its way onto the back of a recovery truck.

This wasn’t the fault of the Vectra. It was my doing. I topped up the oil, then didn’t bother to put the cap back on. Mainly because I’m a forgetful idiot. That resulted in the engine bay filling up with vaporised oil. It went into the turbo and the engine then decided to ‘run away’. Diesels can do that. It means the engine is in a free spin that can’t be stopped. Scary at the best of times, even scarier when you’re passing J7 of the M4 at 70mph.

The poor thing bombed smoke, the engine shot to 5,500rpm and there was nothing I could do. I was a passenger. I got it to the hard shoulder and then ran away from it, anticipating a shower of big ends and pistons as I did. Thankfully, it burned off the oil and came to hot, steamy stop. I was pretty sure I’d killed it. BIG YELLOW TAXI, PLEASE!

I hand’t killed it though. In fact, there was nothing wrong with it. Once home, and once the engine block had dropped below 400°C, I put in some more oil, I PUT THE CAP ON, and then gingery started it. And start it did. Tough old girl.

I found a new level of respect for it after that, along with a newfound respect for oil caps and their importance within the engine bay. As such, I rewarded the old girl with some new parts, and by also racking up many a mile. This despite the fact that it was developing a worrying ‘clonk’ every time I set off. But meh, it worked, so I wasn’t going to worry about that.

That ‘clonk’ steadily got worse. On one commute, I was heading southbound on the M5 and all seemed well. Seeing a Police traffic car, I indicated to overtake and did so with ease. Nothing, officer, to see here. Then I had to go up a long, steep gradient. That’s where the Vectra cashed its chips in.

My speed decreased, the Police car got closer, soon so close it needed to overtake. Speed still falling, I offered the officers in the car a pained smile as my momentum continued to lessen. I shifted down a gear. I was nearly at the crest. It would literally be all downhill from there. But no, the gear-change was too much. It sheared the last remaining shred of the nearside engine mount and the engine, for lack of a more eloquent way of putting it, fell out.

After thirteen years and nearly 180,000 miles, the Vectra was dead. Her last bit of life got me off the motorway, complete with Police escort. Though in reality, it was gravity and a hill, not the car. She had passed. I coasted home in a corpse.

I did take the Vectra to a garage, and they said £550 to get it back on the road (the MOT was also days away from expiring). With a heavy heart, I decided against it. She had done her duty, and done it well. You can’t be upset when you’ve got that many miles out of a car.

Still, there was a pang of sadness as I watched her get carted away to the crusher. The Vectra might not be a mass favourite, but I loved mine. It only ever let me down on its deathbed. Other than that, it was a faultless automotive companion. Rest in peace, KR51LYU.