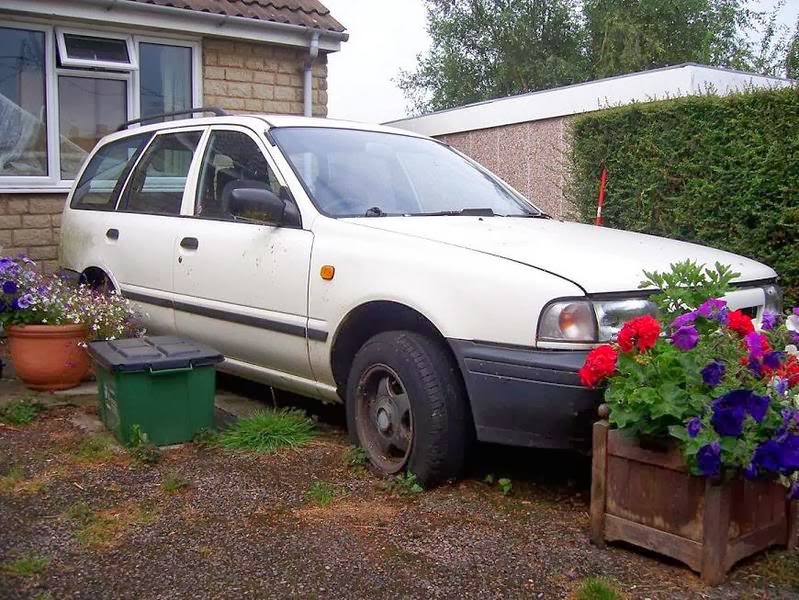 This might shock you, but while this Nissan Sunny did die, it wasn’t by my hand. Also, when I owned this car, I chuffin’ loved it. Sexy it wasn’t, but brother, we had history. It all started in 1992 when I was nine and when people looked like this…

My mind fails me at the moment. I honestly can’t remember the name of the dealership where Mother and Father bought the Sunny from. I remember it was on a hill in Oldham, but everything is on a hill in Oldham, so that’s not much use.  I do however, remember my clammy little paws getting all over the lovely lines of the red 300ZX in the showroom, as well as the 100NX, too. This didn’t amuse the salesman, that I also remember. Luckily for me, the act of my parents buying an off-white 1992 Nissan Sunny 1.6LX estate seemed to be enough to placate him.

Straight out of the showroom with nil miles on the clock, it was a great looking thing to my nine-year-old eyes. It had loads of space, it had funky alloy wheels and as something of a huge departure from the Skoda Favorit now relegated to role of part exchange, it had electric windows.

As it was to be our new car, I hid a Gi Joe figure in the glove box to see if it would be there when the car was delivered. It wasn’t. That was a huge mistake on my part. Bet the valeter loved playing with that.

Look at them, showing off with their metallic paint

For the next ten years it did us proud service as our family car with little or no incident along the way. It did once briefly feature on Police. STOP! It could be seen darting up a curb as my Dad did his best to get out of the way of a stolen Mk2 Cavalier being pursued through Moston. Exciting stuff.

Other than that, it did the shopping, the daily commute and it took us away on exciting family holidays to Yorkshire (which always baffled me as we’re from Lancashire), which gave my Mother plenty of opportunities to take pictures of it then, despite it being THE ONLY CAR IN THE PHOTO, point it out with a crude caption in biro.

That’s “our car” that, thanks Mum

Around 2002 though, that all changed. My Mother and her then boyfriend bought a shiny new Vectra and handed the remaining key for the Sunny (that the dog hadn’t eaten), to me. This is the car that superseded my Nova, and I couldn’t have been happier about it.

I wasted no time in making it mine and fitted a much needed CD player so I could rattle the speaker to death with Disturbed or Limp Bizkit tracks, if memory serves. On the same day I drove it to Aberystwyth to see a mate at uni, too. Though at one point I found myself angrily washing the windows at another motorist having been rudely carved up on some anonymous Welsh back-road – not because I like to wash glass in a fury, but because the stalks on the steering column had opposite controls to those of the Nova.

Another holiday snap, this time with my Dad looking like some sort of sex pest with a video camera in the bushes. I wish I could explain, but I can’t

I loved that car, it was a fine chariot for me and my pals. Its 1.6 twin cam engine wasn’t fast, but it was reliable. I even gave it the service of its life, replacing nearly everything. It only cost about £500 which was money well, and deservedly spent in my eyes. However, to offset my generous maintenance, I did also once attempt to J-turn it out of a parking space outside the Co-Op in a bid to impress some girls, much to the amusement of my friends in the car at the time.

I didn’t impress them. I pulled the driveshaft out of the gearbox instead. As it turns out, this doesn’t impress girls. Younger readers take note.

The car and, again, my Father. This time looking slightly less sex-pesty

All in all, the remaining tenure of my ownership was uneventful. It was reliable, fuel was 71.9p a litre and times were good. It never let me down, I managed not to crash it, nobody stole it and when I went camping, its estate-shaped rump made a perfect tent. It was simply a wonderful car for a young driver to have and I adored it.

Eventually I had enough money to buy another car, and while my love for the Sunny was still strong, the influence of my new Bristol friends (oh, I’d moved to Bristol by this point) and their fast cars was too much. As such, I bought that staple of speed and style commonly known as… a Rover 420GSi. I know, I’m a monumental idiot. I’ll get onto that steaming heap of worryingly-not-the-last-Rover-I-ever-bought crap in the next posting.

With the Rover collected, I offered the Sunny back to Mother to be used as a second car. I had looked after it to a degree and it still had lots of life left in it. I delivered it back to them, they put it on the drive.

That’s where it sat, never to be used again. It just rusted, seized and eventually it was too far gone. I did try to get it back off them, but there was always a promise of it being ‘looked at soon’ to hold me off. It was a promise that never reached fruition.

And that’s the last picture I have of it, sitting in the final space it would ever call home. Yes it was bland, it was slow and it wasn’t sexy. It was faithful though, and it took me wherever I wanted to go without failure, complaint or hesitance.

To sum it up, K422 VNE was a damn good car. It did what a young man’s car should: it gave me true freedom. Because of that, it wove itself into the fabric of some wonderful memories. In all honesty, I still miss it. But then I’m a car guy, so I let myself get emotionally attached to these things. R.I.P little Sunny, you’re still missed. Thanks for the memories.