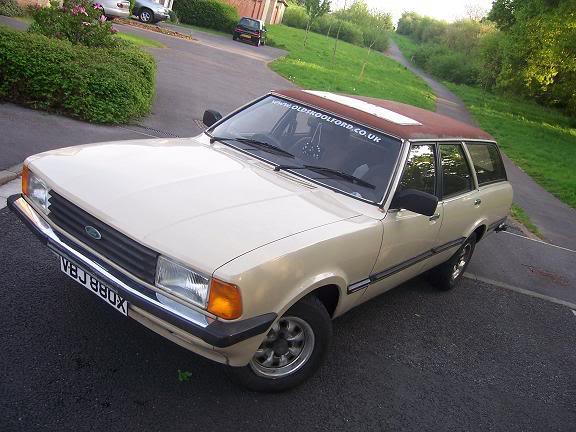 As is so often the case with many of my ‘trusty steeds’, this purchase came about via the lethal combination of eBay and alcohol. You would think I would have perhaps learnt a valuable lesson after the debacle surrounding that awful W123 Mercedes, but no, I was still a sucker for a bit of the old tipsy bidding. What could go wrong… again?

Funnily enough, ‘what could go wrong’ came in the form of a £276 winning bid for a car on the other side of the country that had been listed on eBay by a man who’d clearly never used a computer. Or a camera. GOOD STUFF!

I recruited my mate Kev and his mate Ian, we loaded up my Vectra (not the SRi, the one I bought afterwards – told you I had a weird thing for Vectras) and headed out to Royal Tunbridge Wells with plenty of fear and trepidation. And an A-frame.

The car in question was a beiger than beige, 1979 Ford Cortina 2.0GL estate. Straight pimpin’, right?

On arrival, we were pleasantly surprised…

Once scooped up on the A-frame and delivered to Ian’s place for a check over, the all too familiar new car joy melted away. There was also a quiet moment when we pondered just how we’d managed to drag it some 100 miles without the back axle falling off, what with it barely being attached.

While I wasn’t a stranger to old Fords at the time, I was a stranger to the Cortina. Apparently, they like to rust from within, taking all the suspension mountings out of action in the process. But hey, what could I possibly expect for £276? Quite frankly I should have been glad it had an axle at all, intentions to escape or otherwise.

Me being me, I threw some money at Ian, asked him to fix it and then went home. Not that I had lots of money to throw, it was more a case of me being a big girl and not wanting to a) tow it any further and b) having limited experience on the cold side of a MIG.

A month or so later all the welding had been done and it was on the road with a fresh MOT. Result.

Kev here, looking quite pleased about it

Buying the Cortina coincided with the start of my journalistic career – I was the newly appointed Features Editor on Retro Ford magazine and hot damn, I wanted a project car. It wasn’t a prerequisite of the job or anything, I just wanted a car to which I could bolt all the free parts I’d no doubt be sent. Because that’s how car magazines work, right?

Ahh, the memories. Me on the left, Editor Morley on the right. Betwixt us the car now known as Goldmember

As it turns out, companies weren’t exactly overworking Postman Pat by sending me free bits, though I did get some Spax Krypton shocks. And a bloke building another Cortina gave me some lowered springs. That was about it though. Oh, and Ivan at Ford Heritage gave me a, wait for it, REAR BUMPER CORNER!

Dizzying thrill of injection moulded bumper parts aside, I obviously made the most of what I had and slammed it on the deck.

…and then BOOM! SLAM TOWN! Or, maybe 60mm lower

Okay, so the ‘slamming’ wasn’t particularly drastic. Nothing ventured, nothing gained though. Plus, free parts.

Another free part came in the form of a five-speed gearbox to make it a bit more motorway friendly. I secured one and the required crossmember from somewhere or other, then bribed a mate with cuddles and biscuits to fit it. He happily obliged, car was five-speed, project was picking up momentum.

Another thing to pick up momentum was the rubber knuckle or ‘donut’ on the prop-shaft. It picked up so much momentum in fact, that it spat rapidly rotating rubber all over the M4, showering the bloke behind with chunky ex-prop-shaft material. Needless to say, he was delighted.

It was at that point, as I contemplated being struck by the prop once it succeeded in braking through the floor (or at least that’s what it sounded like it was going to do), that I came to the sudden realisation: I had absolutely no love for the Cortina.

Nothing, nada, zip. It truly was beige in every sense of the word. It wasn’t fun to drive, it didn’t excite me, I wasn’t greeted with a gaggle of dancing girls whenever I went to a car meet and while it could happily accommodate a double air-bed in the back, nobody would share in the marvel without first consulting a medical professional. Also, no matter what I did to try and prevent it, the passenger footwell filled with water every time it rained. It was just dull and, the longer I lived with it, annoying.

It loitered outside my house for a few months before I got around to replacing the prop, and even then, after a long absence behind the wheel, I still found it tedious to drive. A few phone calls later and it was sold to a fellow car mate who actually had some enthusiasm for it. It was later sold again and to the best of my knowledge, it still lives on (though last time saw it, it looked rough as hell, poor thing). The current owner is threatening to put a Volvo turbo engine it. Right’o fella.