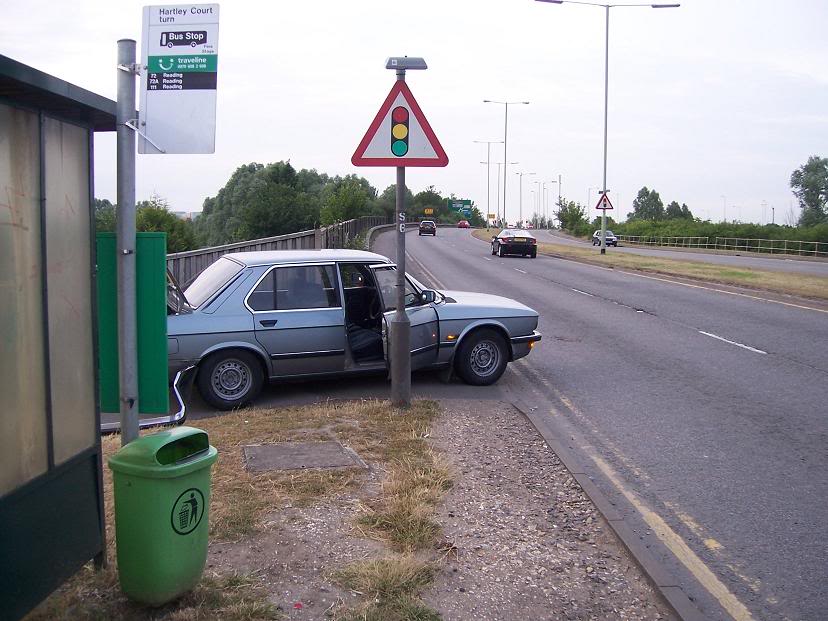 There was a gap for year or two between my Rover 420GSi and this for reasons I can’t be bothered to explain. So, er, I won’t. What I will explain though, is that the purchase of this car is eBay’s fault and in no way the consequence of my lifelong propensity toward buying cars that should have been scrapped long, long ago.

Oh, and beer. Beer factored into this, because beer and eBay are always a grand combination. Much as my current watch list will confirm.

Actually, it looks better than I remember. £300 well spent, surely?

As previously mentioned, I lived in Bristol by this point. Rather than buy a car from somewhere local though, I opted to employ alliteration instead, so I bought my BMW from Bolton. Some 180 miles away. Close enough.

Astoundingly, upon seeing the E28 518i, I was still willing to hand over cash. A normal person would have taken one look at the war zone of a back alley I was buying it from and run a mile. I did not. I smiled the smile of an idiot now some £300 lighter and drove away to the soundtrack of a small engine with far too many miles on it. Oh, but not before removing the hubcaps in a bid to make it – it fills me with shame to type this – ‘cooler’.

Remarkably it made the 180 mile drive home without setting on fire, exploding or falling apart. Clearly £300 well spent. The purchase became even more justified when it made light work of getting me both too and from work on a near daily basis. Plus, it was so unspeakably awful inside that my now ex-wife refused to ride in it. Result.

So pleased was I with its loyalty and service, I treated it to some new paint on the wheels and a CD player too. And then, so pleased was the car with me, it took it upon itself to play a lethal game of crack the whip. This would have been fine had the ‘whip’ been a ribbon, or a string of kittens, or one of those foam noodles you use to stop your children drifting to the bottom of the pool during a Thomas Cook all inclusive holiday. But it wasn’t. No, the ‘whip’ was the chuffin’ bumper after it decided it no longer wanted to be part of the car.

Yeah, could have done without that really. Probably could have fixed it, too. I didn’t fix it though, as kicking the living crap out of it while it was wedged on a footpath between a bus stop and fence seemed much more appropriate.

Then the exhaust snapped. It didn’t warn me by blowing before hand, it just snapped. I had learned to take a more mature response to my BMW’s failings by this point, so in a flurry of activity and urgency my mate Kev welded it back together with… well, with a baked bean tin alright?

Can’t get quicker than a Kwik Fit fitter etc…

After a week or two of driving around with an exhaust that sounded like someone attempting to murder a drunk trombonist with a broken kazoo, my E28 cashed its chips in and gave up for good.

I hopped in one morning and while the old shed did fire up, it wouldn’t go in gear nor would the clutch pedal do anything other than flap around. Probably just the clutch slave cylinder or something along those lines – an easy fix. Probably £50 from the local motor factors and a couple of hours to fit. Job jobbed. Or, I could just push it around the corner, stick it in a bush and then sell it to a banger racer for £60. Yes that.

Why would I bother fixing it? It was a rusty, horrid, smelly heap and besides, I had my Capri to use. Yes, another bloody Capri. But before I get to that, you need to know about the Zodiac that came before it (we’re back in the realms of me owning far too many cars at any one time again).

So as they said in the 70s on TV, be sure to tune in next week for another thrilling instalment!