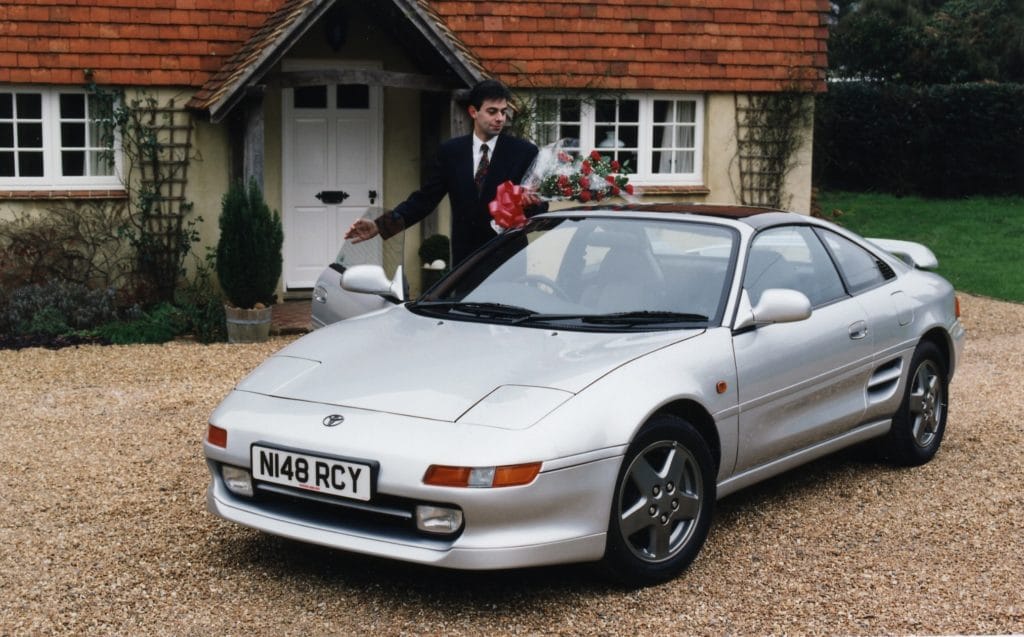 For a lot of people, sad people with no lives, cars a just a white good. A thing. A means to a mobility end. To others, like you and like us, cars are powerful, emotive, captivating things that stir up emotions. Cars are more than a collection of nuts, bolts, glass and rubber. We see them as living things, machines with personality and with soul. And with that, we humanise them. That, of course, leads us to see them as objects of beauty. And one car that was and still is achingly beautiful is the W20, or second-generation Toyota MR2. Balanced, with poise and purpose, the second MR2 to the hard-lined style of its ’80s forebear and styled it into something that is still, nearly thirty years on, timeless.

Seriously, look at that side profile. The designers clearly laboured over those lines to ensure the balance was perfect. And they nailed it. So much so that some members of the press referred to it as the ‘baby Ferrari’. This then apparently gave people called Wayne carte blanche to glue F355 bodykits to poor, unsuspecting MR2s. YOU’RE NOT CONVINCING ANYONE, WAYNE.

Anyway, we’re not here to lament the works of Wayne. Instead, we’re here to celebrate the MR2 for the car it was, not the horror show it would become when melded with £500 of eBay body kit.

It was, as we said, a stunning machine. We were left agog when images started to circulate in 1989. This small sports car looked like it had come from the future. It was sleek, stylish and sophisticated. And with it, it further cemented Toyota’s reputation for knocking it out of the park.

Of course, beauty is nothing without the minerals to back it up. Thankfully, Toyota being Toyota, that side of things was covered. The mid-engine, rear-wheel drive layout mean that it could have been powered by a blender it would have still been a riot. Tipping the scales at around 1,250kg, you didn’t need a lot of power to shove the MR2 along. As such, even the 2.0 16-valve, twin-cam engine with a meagre 119bhp was enough. Well, we say enough. This is where the big caveat of the MR2 comes in.

It is not the hard-nosed sports car belied by its looks. It’s a cruiser, a car for enjoying, not a car for driving on the ragged edge. And this is where it fell down. Later revisions of the engine saw more power to the tune of 158bhp and then 172bhp, especially when the giddy fools at Toyota strapped a turbocharger to it to get over 200bhp. But even so, critics complained that it wasn’t as light, agile or as nimble as the featherweight Mk1. But Toyota wasn’t trying to capture the essence of the Mk1. Instead, it was responding to criticism of it, with people saying it was too small. Toyota couldn’t win. The poor bastards.

Take the Mk1 out of the equation and look at the Mk2 as a standalone product. If you do, and judge it on its individual merits, you’ll be happy. The Mk2 MR2 is a great car. It was well balanced (though that’s not to say it wouldn’t swap ends with just a smidge of provocation), even better after 1994 when ABS and re-work of the suspension made an appearance.

In terms of transmission, there was the standard five-speed manual with an optional four-speed auto for those who like to be a bit more relaxed.

Internally, there was space for two and an array of fixtures and fittings that, while dull, were cut from Toyota’s block of hard wearing stuff. The interiors still hold up today, you really would have to be a weapons grade clutz to ruin one. Cloth trim can and does wear out over time though, so that might be something you need to overcome. And the leather on steering wheels can fray, but we are talking about a near thirty year-old car here.

What about problems? Happily, there are few to report, even on a car of this vintage. Rust can be concern, especially if the car has been subjected to second-rate repairs, so get on your knees with a magnet and have a good poke around. Because they liked to swap ends, especially early cars, crash damage is something to look out for. Pop-up headlamp kits can fail, but serving kits are available. The suspension and in particular the steering need to be monitored, as a collision with a wet twig can knock them out of whack.

Engine wise, you need to service them every six months ideally. Just oil and filter. Belts need to be done ever 30 to 40k, while the belt-driven water pump should be replaced every other belt change. If you can, get a car with full history, just for peace of mind. The 2.0 lump is a damn fine engine, but as with anything, if it’s been maintained by an idiot, it’ll fail.

So what’s your two grand going to get you? Sadly, the Mk2 MR2 is somewhat thin on the ground these days. They’ve either been crashed, modified or turned in melted Madame Tussaud F355-u-likes. That said, you money should get you a UK specification 2.0GT, which is a nice middle of the range specification. You’re not, for this money at least, going to get a turbo. If you do, we can promise you it will be a wheeled grenade.

If it were our money, we’d hold out for a really early, base-spec car with no frills. Maybe, at a push, we’d got for a T-bar roof, but that’s it. but hey, we’re weird like that. Whatever you choose, you’re going to get a cult classic that is about to come into its prime. It was, and still is, a great machine. Plus, as we said, pop-up headlights.