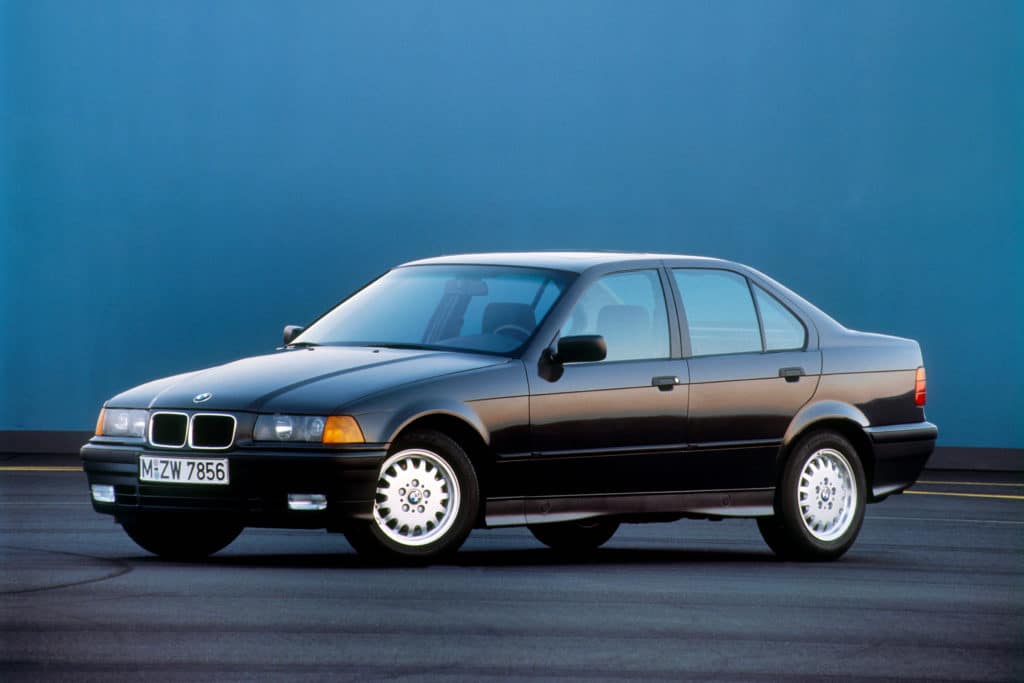 Go onto that big online auction site, type in ‘drift car’ and what you’ll be presented with is a list full of slightly battered E36 BMWs. Each one will have a lone bucket seat, a shonky hydro handbrake bought from aforementioned auction site, mismatched wheels and no back seats. The seller will describe the car as a project. But what he really means is that he’s bloody ruined it. This needs to stop. The E36 has unwillingly fallen in front of the cross-hairs of people who vape from under peaked caps that still have chrome stickers on them. And it’s not right. The E36 3 Series was and still is a damn fine car. It’s also a car that it destined to become a classic, thanks not only to their build quality and river appeal, but also because the drifting scene has whittled the number of unmolested E36s down to about eight.

The E36 was the third 3 Series from BMW, taking over from the now stupidly expensive E30, which in turn took over from the now ‘where’s all my money gone?’ E21. It was built from 1990 through to 2000, and it was also the first 3 Series to be made available as a hatchback. This was the Compact model. But we’re not talking about that here, because it’s horrible. And if you like them, you need to sit yourself down and have a think about the kind of person you are. Some sort of sociopath, probably.

Anyway, ignoring the Compact, the E36 could be had in saloon, coupe, estate (Touring) or cabriolet guise. And each one was exceptionally handsome. It designed by the K Pop duo, Pinky Lai and Boyke Boyer, and they did a damn fine job. The E30 was and still is a handsome car, but with the E36 they sharpened the lines, improved the aero and tightened the whole thing up. The headlights were, for example, covered units rather than four individual lenses, the body was smoother and cleaner, especially in and around the front and rear screens. It was delicate in the details, but muscular in its overall look. It was, in a nutshell, a design winner.

Chassis-wise, you got the BMW standard 50/50 weight distribution, which is why vapers like to buy them before changing their name by Deed Poll to Kenneth Block. It was, again, the BMW standard front engine, rear-wheel drive. As such, it was and still is an absolute joy to drive. Even a ropy 318i is a hoot on the right road. But a sorted 328i, man alive, that’s pure driving pleasure. You could say it’s the ultimate driving machine.

While we’re on the subject of engines, the E36 had more options than Gordon Ramsay has insults. In a nutshell though, the petrol engines are good apart from the wheezy 98bhp 1.6, though the 101bhp one isn’t worth your time either. The 1.8s are lovely, but do go for the 138bhp from the ‘is’ model. The six-cylinder engines are lovely, but do get the 2.8i – it’s the best one.

If you like your fuel oily, the diesels are decent, too. 325tds is the one to have though. All of these engine had a five-speed manual, or the option of of either a four or five speed auto. Yes, there was a six-speed manual, but only in the M3. And you can’t afford one of those, so five speed it is.

The E30 was a damn fine automobile, but the E36 just took things up a level. There was and still is something very solid and dependable about a nice E36. If it’s full of eBay aftermarket gauges and riding on a set of wheels that don’t fit, then probably not. But you’re not going to buy one of those, are you? You’re going to buy an E36 that’s been cared for.

And as we mentioned earlier on, there is something for everyone. The cabriolet is still, in 2019, a beautiful thing to drive and own. Plus, it’s one of the best looking mass-produced four-seat convertibles ever. And that’s a fact. Then there’s the coupe, which is just a perfectly designed little thing. The lines are spot on, especially with a Sport kit. Hnnng. And then there’s the immensely practical estate, or the classic saloon. See, something for everyone of you. Yes, even you.

Of course, this is an old BMW so there are some things to be aware of. For starters, the early eight-valve engine had a timing belt, not a chain. Needs to be changed every three years or 36k, unless you like your valves bendy. The M52 engine was prone to scored bores thanks to the sulphur in UK fuel. Engine rebuild time. Noisy M40 engine? That’ll be worn valve gear.

Early cars were built with crap trim, so they fell apart or rusted into oblivion. That said, even later cars can and will corrode internally – sills, inner arches, suspension mountings, they all rot our, so get under the car. A cause of this can be shagged screen seals, which lets water into the car. Lift the carpets and have a look.

Other than that, just be thorough. You want history and low miles if possible, though they can cope with higher mileage if fastidiously looked after. Check the MOT history for any scary past issues, and just take your time buying. There are plenty about for now, so you don’t need to buy the first one you see.

Now, while there is no denying that it’s fun to take the piss out of the drifters, there is ultimately a point to it. Find a nice E36 – one that still has the dealer plates and factory stereo – and then sit back and smile. Because every time a so say ‘drifter’ slams his 316i into the wall at Buxton, your E36 goes up a couple of quid. And that’s not automotive rhetoric. The E21 was worthless and is now coveted, the E30 too. But that was without the dritybois. They’re speeding up the process, so get in there while you can. You won’t regret it.

Remember, this is the ultimate driving machine.