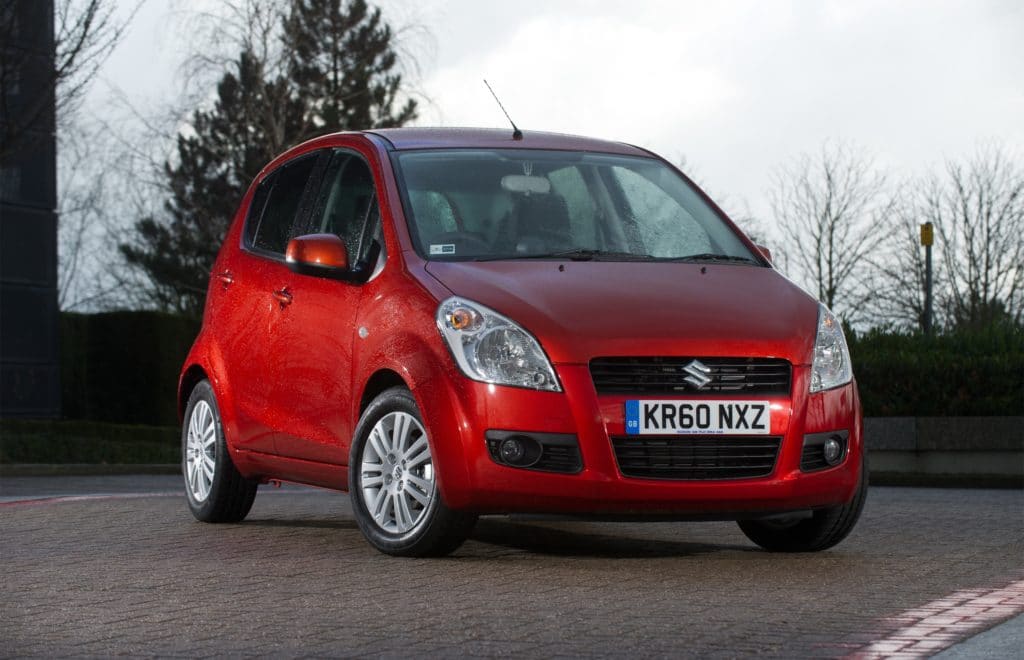 It’s easy to hate on the small and simple cars, but more fool the motorist who does – these cars are often the best way to have fun on a budget. A case in point would be this, the Suzuki Splash. It’s small, it’s light, it’s frugal, it’s practical, it’s safe and above all else, it’s fun to drive. Okay, so it looks a bit like a wobbly toaster, but looks aren’t everything. At least that’s what our mother told us.

We’re talking about the Splash because we have direct experience here. Sort of. We say sort of, because our experience lies with the Vauxhall Agila, which is pretty much the same car, just with less spec (we’ll get to that later). You see, back in 2012 we worked at Vauxhall, and when we weren’t selling 20 year-olds into inevitable crippling negative equity, we were usually driving an Agila. At first, we scowled. Then we drove it and fell in love. It was eager, it was infinitely chuckable, and while it only had the same power as a microwave, we could use every bit of it.

When it comes to the world of the sub-two grand motor car, you have to leave your snobbery and any brand loyalty at the door. This marketplace is about exploration, and about judging cars on their individual merits. You, yes you are driving the car. So you’re the only one that matters. Who cars what other people think? To worry about the opinion of others is to rob yourself of experiences, and the little Suzuki Splash is a wonderful experience. It’s a car to put a smile on your face, and there’s a lot to be said for that. And to completely nullify everything we just said, it’s not a Vauxhall. Imagine telling people you’d bought a Vauxhall. What?

The Splash was a joint project between Suzuki and Vauxhall, following in the tradition set by the previous Agila and the Wagon R+. As as often been the case, it’s never a bad thing to share the development costs. This was especially good for Vauxhall, given that Suzuki has considerable form when it comes to make tiny people movers. In reality, the Splash was more Suzuki than it was Vauxhall, and that’s why we’re focusing on it here and not the Agila.

What do you get then?

Well, the the Splash is a teeny little box on wheels with a cheeky face and an impressive level of practicality. That ungainly-shaped body might not be low or sleek, but it does mean that you can fit two adults and a selection of children (preferably your own) in it without complaint. In fact, it’s worth spending some time looking at the interior. The Splash is a well-appointed little thing, with manual air-conditioning, electric windows, an MP3 CD head unit and even a leather trimmed steering wheel – all as standard. The Agila’s base trim lacked all these things.

And it’s screwed together remarkably well. Even today, ten or more years down the line, the innards of the Splash hold up. Some care and attention was clearly put into the construction and also into comfort. The front seats offer plenty of adjustment, the steering wheel can alter its height (but not reach, sadly), visibility is excellent and all in all, it’s a comfy place. You can even get a couple of adults in the back if needs must, though make no mistake, this is an occasional form of transport for rear-seated full-sized people.

As for the boot, you’ll get some shopping in there. But that’s about it if you have three or more people in there. Ditch the passengers though, and the Splash opens up into a massive space in which you can put many large things. This means you can buy things. THINGS.

Let’s talk power. The galloping horses. The grunt that propels this mighty, Splashy steed toward the horizon. Yes, this beast has… some. Not a lot. Just… some. There’s a 1.2 petrol with a dizzying 85bhp, or if you like your fuel to be compressed into action, there’s a 1.3 diesel with 74bhp. There was also a 1.0 on models from 2009 onward.

They’re all just engines. The 1.0 is cheap to tax and very frugal, but it would struggle to pull a 5 tog duvet off. The diesel, ugh, just ignore it. The petrol engines are frugal enough, the diesel doesn’t jump the figures up enough to justify its existence. So, buy a 1.2. It’s still cheap to tax, it’s still frugal and it has enough power to ensure all the poo stays in on motorways, unlike the 1.0, which will have you dancing with Scanias in lane one.

And no, 85bhp isn’t a lot. It’s not a lot in an ocean liner, or a large building, or in an elephant. But in a featherweight Splash, it’s ample. And you can get on first name terms with every one of your 85 horses. And that’s more fun than having hundreds of horses that are strangers to you.

Transmission wise, you got a five-speed manual or some some 1.2GLS+ models, a four-speed automatic. Avoid the slush ‘box though, unless you only have one leg. The manual is far more fun.

On the road the Splash is a well-mannered little thing. The steering is very light, but it is direct, so there’s that. The brakes are well-matched to the car, even when it’s full of people. The suspension and chassis, while not revolutionary, are compliant and perhaps even a bit too firm in some situations. But that’s better than it handling like a bin bag full of scrambled egg. You get in it, you do things with the pedals, you point the Splash where you want to go and you go there, while smiling. There’s a cheeky terrier-like urgency to the Splash. Like the Jack Russell that’s always choking itself on its lead, it won’t know what to do if it was free, but man, it’s going to try and get there. We like that.

If you should try and park in something hard, like a library or a tree, EuroNCAP gave the little Splash four out of five stars. You have ABS, EBD, front and side-curtain airbags and Isofix for the little’uns. Don’t park it in a tree though. Just take our word for it when we say it’s safe.

Look, we know the Suzuki Splash won’t be for everyone, and that’s fine. But if you’re a young driver looking for a first car, or if you’re a growing family looking for a second, the Splash is perfect. It’s cheap, it’s well equipped, all the used ones have no miles and have loved and cared for by people called Doreen and Gerald and as such, they represent a tremendous bargain.

Do it. Buy one. Make a Splash. BOOM, WORDPLAY!