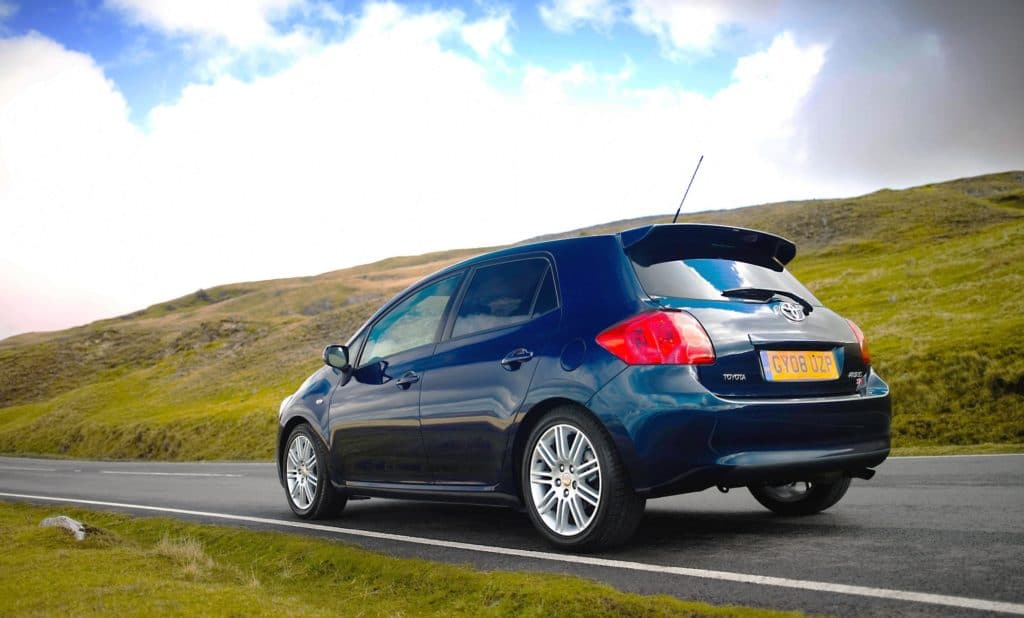 You can be one of the biggest names in the game, but that doesn’t mean you’re always going to hit the proverbial nail on its proverbial head. A case in point would be Toyota and the Auris, a car so forgettable…

…what were we talking about? Oh yes, the Auris. Sorry, we forgot.

But does a car’s inability to tattoo itself into your brain mean it’s a bad car? No. Corn Flakes are the magnolia of breakfasts, but a bowl full of the crunchy morsels is still a perfectly acceptable start to the day. Tea isn’t thrilling, but you drink it because it quenches your thirst and it gets you away from your desk for ten minutes. Jeans are not dazzling, but they keep your bottom warm. Boring is not a synonym for bad. Boring can be perfectly acceptable, and that’s exactly what the Auris is.

We’ve covered the ‘boring but dependable’ thing before. We like an unassuming car here at Not £2 Grand. You see, you can have your toys, your projects and so on, but to get the most out of them, they need to be just that – toys. If, for example, we started using our Rover 800 every day, it would lose the fun element. It would become our full-time car, not our plaything. That’s why we have a C Max for family duties. It’s not exciting, it’s not dynamic, it’s not fast, but it does the job of being a daily driver with aplomb.

The Auris is a daily driver. It’s reliable (we are talking about a Toyota here, after all), it’s comfortable, it’s practical. Perfect then. And when you’re buying on a budget, sometimes it’s best to ignore flair and pizzazz in favour of just getting something that you know won’t let you down. That’s what the Auris is. It’s a car. Nothing more, nothing less.

The Auris was branded as being the replacement for the world’s best-selling car, the Corolla – a car so dull it made watching Dulux dry seem like an extreme sport. The Auris boasted a bit more flair and dynamism, but only in the same way that putting some jam in rice pudding ‘spices things up’. It wasn’t a game-changer. In reality, Toyota could have easily branded it as a Corolla, but so determined was the company to get away from the Corolla’s stale image, a new name was needed. Auris means ear in Latin. We think Toyota missed the mark. But whatever.

The car, a traditional three or five-door hatch initially, was a decent bit of kit. It was, and still a brilliantly screwed-together machine. Get in a ten year-old one today and you’ll be impressed. Not only that, you’ll be satisfied you’re buying something decent, which is a nice feeling when you’ve not got much to spend.

The dash is bland but solid and well laid-out, the gearshift is mounted on the lower half of the dash, so you can pretend you’re in a Civic Type R. There’s space for four adults, five at a push. It’s light, airy and pretty comfortable. The steering column adjust for reach and height, and there’s lots of adjustment in the seat. It is, to use the motoring hack’s cliche, a nice place to be.

On the road, the Auris is an animal that would force a sweat from the ghostly brow of Senna. Or, you know, the opposite of that. It’s capable, it plods along with a pleasing degree of confidence, it’s supple and it won’t fall over on a bend. Road noise can be a bit harsh at times, but that’s about it. There is nothing revolutionary about the underpinnings at play, it’s just normal suspension. Some struts of front and a torsion beam at the back, unless, that is, you plump for the T180 version. This is the ‘hot’ Auris (confusingly powered by a 177bhp diesel engine). As such, it has nifty multi-link rear suspension. It’s good, but it’ not going to worry a Focus or a Golf any time soon.

Engine-wise, the Auris has had many. For your budget, however, you’re going to be looking at the 1.6VVT-i petrol with 124bhp or the 130bhp 2.0D4-D. There are other engines like the 1.4 petrol, but the 1.6 and the 2.0 mentioned were by far the most popular and rightly so, as they were the best all-rounders. There is that 177bhp found in the T180, but that’s a model that is normally a bit leggy and abused by the time it hits the sub £2,000 bracket.

What else? Um, safety. EuroNCAP rearranged the face of an Auris and gave it five stars for its trouble, so that’s good. Urm, it’s reliable with no major common faults to its name. There was a recall because the front brakes could, er, fall off. But it only affected eight cars, so you should be fine.

It’s not revolutionary, it’s not exciting, but it is good. The Auris is a good car. And when you’re buying on a budget, good is good enough. Buy an Auris, employ it as your daily car, and keep your risky, fun cars for the occasions when they work. Simple.