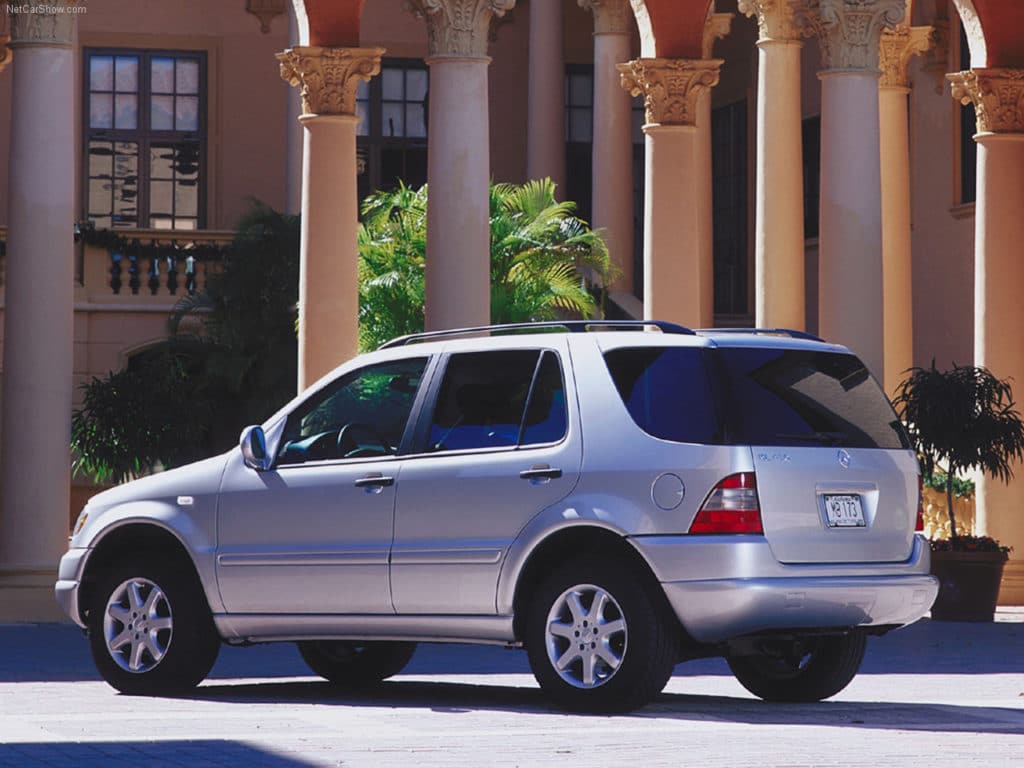 It really wasn’t very good. You know you could just go out and buy a P38 Range Rover, right? Or if that doesn’t do it for you, how about a plank of wood with some wheels nailed to it? That would be better. Honestly, it would. You don’t want an ML. The newer ones are okay, but the original… well, it’s a bit crap. Okay, okay, it’s a lot crap. Honestly, the only reason for people buying this automotive horror is because they want their neighbours to think they’re doing well. We’re not buying it, Dave, even those who know nothing about cars can deduce that your leggy, slightly battered ML is a heap of scrap. Just buy a Mondeo and be normal.

You might think we’re being a bit harsh here, but honestly, we’re not. Today’s ML is a decent bit of kit. In fact, every ML after the original is okay. The first ML was a painful learning exercise for Mercedes-Benz. If it were a science experiment, it would have been labelled and put in a cupboard. But because cars are somewhat more expensive than Petri dishes, Benz had to roll the ML into production. It really shouldn’t have bothered.

At the time, so in this case, the late ’90s, Mercedes-Benz didn’t have a 4×4 offering. None of the big Germans did, actually. It was a simpler time. A time before school-run mums needed a car the size of Suffolk in order to drop off their precious snot-balls at the local comp. Range Rover had the luxury 4×4 market cornered. Yes, there was the Nissan Patrol and the Toyota Landcruiser, but they were for people with no fixed abode, favouring caravans instead, and they had names you can’t pronounce.

The X5 didn’t exist yet. Porsche showrooms were full of Boxsters and 911s only, and Volkswagen’s Twar… Tour… Ture… big 4×4 thing was just a sketch. Mercedes-Benz saw an opportunity and struck. It had the G Wagen, but it was and stil is ludicrously expensive and generally only bought by Russian oligarchs and/or mobsters. Mercedes needed something fresh for the soccer-mom movement, so the ML was born. And then they let the Americans build it. Oh dear.

Before we get onto how the Americans made a right balls up of it, we should turn back the clocks to the early ’90s. It was time that offered a far brighter future for the ML. You see, Mercedes-Benz went skipping off into the design studio with Mitsubishi, who happen to know a thing or a two about building a 4×4. They toyed with designs and platforms for a few year, but for reasons we’re still not sure of, the two parted ways. The cited “technical problems” as being the reason behind the split. We’re not sure exactly what those reasons were, mind.

Mitsubishi went back to Japan and Benz went back to Germany. There, its boffins carried on penning ideas, of which the first-generation ML was one. It had the right looks, it was loaded with premium kit and on paper, it had all the right oily bits. It should have been a winner.

Knowing, or should we say anticipating America to be the biggest market for the ML, the company decided to find a location and build an all-new plant for its production. They chose Alabama. And while we’ve nothing against Alabamans, it’s hardly the global hub of vehicle quality. This is a swathe of land on which the pickup truck is king. But crucially, it’s also somewhere the pickup truck ‘will do’. The notion of a German-designed car laden with leather and wood seemed lost on them.

The design was pretty simple. It was a body-on-frame construction, like a pickup, so assembly should have gone well. It didn’t though, and the build quality was way off what Mercedes-Benz buyers were expecting, which is alarming considering the late ’90s marked a time when Mercedes largely forgot how to build cars (looking at you, W202). Even so, the ML wasn’t good, and the press were quick to pick up on it.

Despite being fitted with a clever four-wheel-drive system and, in a first for SUVs, electronic stability control, and a whole host of other goodies including a decent 3.2 V6 engine, it wasn’t enough. Especially when the press started to factor in the drive.

The ML was tall, and with it, deeply ungainly through the bends. Surefooted it was not. Curiously, the clever 4×4 system meant it was pretty good off the beaten path, though not Range Rover good. However, it wasn’t a pleasant thing to drive on rough surfaces. Weird. For motorways though, where it would inevitably spend most of its life, it was… adequate. For a Ford that’s fine, but for a Benz?

If you absolutely must take leave leave of your senses and buy one, the engine of choice is the 2.7CDi diesel. It’s got a bit of punch when you need it. Yes, every time a diesel revs a giraffe dies, we know, but still, it’s marginally better than the 3.2 V6 petrol, which is far too thirsty and far too noisy when pushed. But that’s like saying toast you dropped on the floor better than the toast you dropped in the cat’s litter tray. The ML55 AMG is a bruiser with its 5.4 V8, but if you can find one under two grand it’ll be shagged. So don’t. Trust us.

All engines were mated to a smooth automatic transmission. There was a poverty-spec 2.3 petrol with a manual ‘box in the early days, but they were rubbish. We have seen a 2,7 with a six-speed manual, but that strikes us a bit of an oddity. besides, in something this big, you want the 5G Tronic, it’s a good automatic.

The positive is that while the build quality was off, the ML was still a hardy beast. To be fair to it, when we comment on the build quality, we’re saying it’s bad for a Merc, but in the grand scheme of motoring, it’s not too bad. At least, it’s not as long as you buy one that was welded together properly (yes, there were early reports of welds being missed on production models).

Early MLs (and it’s not M Class, at least not officially – BMW didn’t like Benz getting on its ‘M’ patch) that have survived this long tend to have been looked after. Big repair and servicing bills killed off the ruinous models years ago. As such, what you have left are the hardy, looked-after examples. So yeah, there’s that. But honestly, just buy something else. It not a proper Mercedes-Ben, and it’s not a proper 4×4. The second-generation ML was A LOT better, and it won’t be long before that drops into our bargain territory.