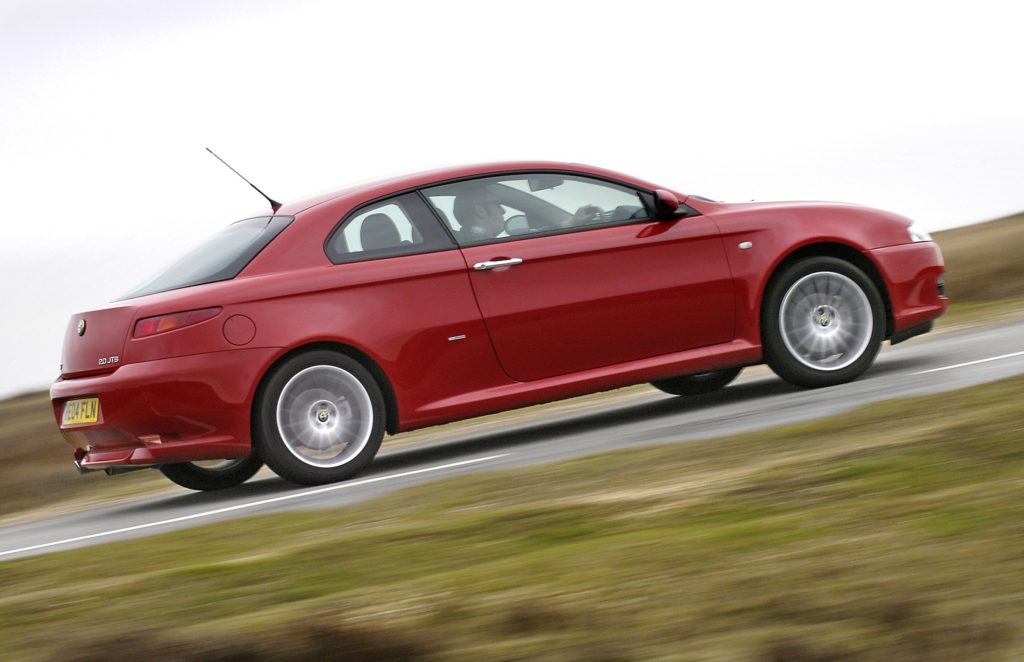 The Alfa Romeo brand is no stranger to the pages of Not £2 Grand. Despite the beauty of the offerings, the reality of a less than glowing reputation for build quality and reliability means every Alfa is one day destined for the bargain bin. But their loss is our gain. As is that reputation. You see, while the average Alfa is indeed slightly more prone to mechanical maladies then the next car, the reality is that all older cars have their faults. So why buy an Astra that’ll break down when you could have something beautiful clogging up your driveway, like, say, an Alfa Romeo GT?

Yes, the GT is a wonderful-looking thing. Some keyboard warriors suggested it was perhaps not as pretty as other Alfa Romeos, but frankly we don’t see it. It’s pure beauty from front to back. Considered lines penned by Bertone, this is one pretty car. But it’s more than just looks, it’s practical, too. And as you’d hope from an Italian sports coupe, it’s also good to drive.

Before we get into the nuts and bolts, let’s take a moment to consider the ‘hur hur, Alfas are rubbish’ train of thought. They’re really not. There, we said it. Yes, they’re a bit more fragile than your average car, but if you buy an Alfa with dreams of Volkswagen reliability, you’re going into it all wrong.

The big thing, however, is the fact you’re buying an older car. This is where being a sub two grand motorist pays off. If the GT your looking at has ever gone wrong, the chances are it went wrong long ago, and as such, has been addressed. Alfas don’t normally wait to fail; they’ll do it the second you drive them off the showroom forecourt. As such, most of them have been fixed long ago under warranty. So don’t stress. If the GT you’re looking at has full history and doesn’t look like it’s been driven through a wall, chances are it’ll be okay. There are, as with any car, some specific areas to look at, but we’ll get to those later.

Right then, so what is the Alfa Romeo GT? What it’s not, as some people thought at the time, is a replacement for the GTV. Instead, the GT was something a bit more usable, in fact, Alfa itself described it as being a practical sports car. And it wasn’t wrong. Based on the 147 platform, it had the underpinnings of a decent hatchback. Instead though, it had that gorgeous coupe body draped on top. But in doing so, Alfa didn’t scrimp on the practical elements. The GT seats five, for starters, and while it looks like a coupe, it’s actually a hatch. This means the huge boot is fully accessible, and with the rear seats folded down you can get a hell of a lot in there. Okay, so the sacrifice is a high lip on the boot opening, but whatever, you’re not going to be filling it with a pallet of bricks. At least we hope not.

While we’re talking about the GT’s innards, you’ll be pleased to hear that it’s a nice place to park your arse. In fact, you’ll find yourself facing the same dash as the 147, which is no bad thing. Okay, so some of the plastics leave a little to be desired, but unless you’re a motoring columnist for The Times, it shouldn’t really bother you. Instead, you’ll like the dials and their red glow, there’s plenty of visibility and the seats are wonderfully comfortable. Noice.

On the road, you soon discover why the GT is a, um, GT. It’s not a car for hunting apexes or powering around with reckless abandon. It shares the front double wishbone and MacPherson rear suspension setups of the 147. However, in the GT’s case, everything feels a bit more supple, less hard-edged. It maybe something to do with the wight of the car, it just be in our head. Whatever the reason, the fact remains that this isn’t an out and out sports car. A point that is further driven home by the curiously heavy yet at the same time indirect steering. Steering which, we hasten to add, as an unforgivably large turning circle. City centre dwellers may want to (no pun intended) steer clear. You’ll not be parallel parking a GT with any ease.

There’s more to suggest the GT is more of a cruiser than a bruiser care of the engines. Or more specifically, the diesel engine. Yes, putting a diesel in a coupe is like getting Holly Willoughby to wear wellies, but stay with us. In the case of the GT, it works. The 1.9JTDM is a perky, responsive lump with 150bhp. There’s a 2.0 petrol if you really must, but honestly, the diesel is a great all-rounder. The only real thing to look for is whether or not the water pump has been changed. They can pack up, and spit off the timing belt in the process. So make sure it’s been done.

And no, we’ve not forgotten the 3.2 V6. It’s just not cheap yet, as is the case with many of the V6 Alfas. Plus, just ask yourself, would you really want a cheap 3.2 Busso? No, we didn’t think so. And before you pipe up about the 1.8, that was only on later cars and is A) rubbish and B) too expensive.

In terms of safety, the Alfa Romeo GT is okay. We think? It was never shot at a wall by EuroNCAP, so it has no rating. That said, the 147 got three out of five stars, so crashing a GT would be marginally safer than falling down the stairs while carrying knives. Possibly. You get six airbags, Isofix mounting points, ABS and traction, so it’s not all bad.

The final thing to ponder is which one to to buy? If it were our money, it would be a Blackline. Fully-loaded with kit, big sexy alloys and as the same would suggest, black trim, it’s the GT at its best. That said, the Lusso spec isn’t to be sniffed at, as it still has lots of kit. But frankly, all models of the GT are decent, as you’ll soon discover if you take the plunge.