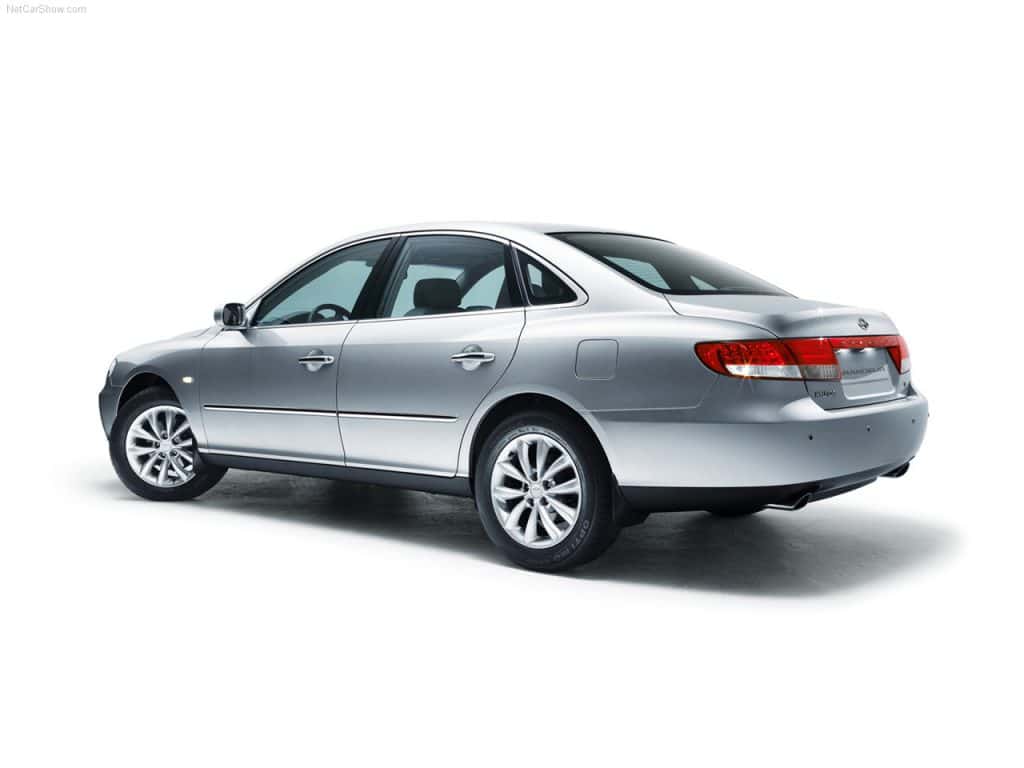 The what? Yeah, we were pretty much the same. In fact, we’ll go as far as to say that we didn’t even know these were a thing until a friend of ours shared a link to one over on Facebook. And so wowed were we by its blandness, we opted to write about it here. What a damn lucky car it is.

It’s no secret that those of us who like our cars also like to do our best to be unique, to stand out a little bit. But usually, no matter what you do or buy, there is a chance you’ll see it in another vehicle. Unless, of course, you buy a Hyundai Grandeur. That is, if you can find one for sale.

Not a bad-looking old Hector, is it? It’s not dazzling, it’s not going to cause unexpected car park erections (we’ve all been there), nor is it going to make you any cooler. But at the same time, it’s not hideous. It’s average. Middle of the road. Safe. And there’s nothing wrong with that. So many cars try to do a multitude of things, when in reality there’s nothing wrong with doing one thing well. In the case of the Grandeur, the one thing is ‘be a luxury car’. It does that very well indeed. But then when you consider that most Hyundais are more reliable than a well-oiled Swiss watch, it’s hardly surprising.

With that in mind, you’re probably wondering why you’re only just hearing about this three-box beast? The reality is simple: the British are snobs. It’s true, we are. Especially when it comes to cars, or at least saloon cars. Small cars, well, we’re not fussy about those. But bigger stuff, oooh, it has to be German. Nobody else gets a look-in.

The A4, the 3 Series, the Passat… they have it sewn up. It’s their market, and that’s that. And it’s our loss. The Koreans and Japanese having been making luxury saloons for decades and they are damn good at it. That’s why cars like the Grandeur exist. And they exist with impressive heritage. The first Grandeur was released in 1986. This isn’t a car Hyundai ‘had a go’ with.

Over here we got the Grandeur from 2006 to 2009. Before that, we had the XG30, another car that failed on our shores despite being really rather good. By this point it was in its fourth-generation, having been a bit of a global success for Hyundai. But not in the UK. Oh no, we were having none of it. Because we’re idiots.

Fitted with a 3.3 V6 with a healthy 232bhp through the front rubber, the Grandeur could shuffle up to 60mph in 7.6s before being reined in by a limiter at 155mph. And if, on your way to 155mph, you hit a bend, you were in good hands. Fully-independent suspension hides under that subtle body. Hell, it’s multi-link at the back. So it takes the bendy bits well. Okay, so the whole thing was let down by the slightly dimwitted five-speed auto ‘box, but you can’t have everything.

Inside we got leather, we got electric everything, we got sat-nav and we even got an electric rear blind. The interior was plush, but functional and without a single frill. Simple would be the adjective to throw at it. But that’s fine. Bells and whistles are overrated. Sometimes you just want somewhere nice to be, and the innards of a Grandeur are most definitely that.

And inside and out it’s well-made. We used to scoff at Korean cars, and maybe that’s what puts off the 3 Series crowd, but we needn’t. It was silly of us. The Koreans take a great deal of pride in what they do, and it shows with their cars. The Grandeur is a well-built, solid car. And it’s safe, too. While EuroNCAP never shot one at a wall, the American Insurance Institute for Highway Safety did, and it gave the Grandeur four out of five stars for its trouble. Nice.

So yeah, the Grandeur is a pretty good car all told. And it’s a LOT of car for a couple of grand. Nobody wants one, but not because it’s rubbish. They won’t pull the trigger because they’re scared of the unknown, so instead they go out and buy a leggy 3 Series with patchy history. Oh what fools.

They, and you, could buy a Grandeur. Think about the kind of person who would go out and buy a new one. They’re called Gerald, and they never miss a service, they have it washed every weekend, and you can bet there has never been a budget tyre fitted ‘just to get it through the MOT mate’ in its life. Gerald is the man you want to buy a used car from. Like this…

The only caveat is that there aren’t many around. That ad up there may actually be the one car sold in the UK. We have no idea how many actually left dealerships. not many, that’s for sure. So you’ll need to scour the ads on a regular basis should you want one.

And you should indeed. The Grandeur is a damn fine car. It’s not exciting, but it’s handsome enough, it’ll never break down if you look after it, and it’ll deliver a surprising turn of speed. Plus, 2006 Canadian Car of the Year awards named the Grandeur its Best New Family Car over $35,000.

If that doesn’t make you want one, we don’t know what will?