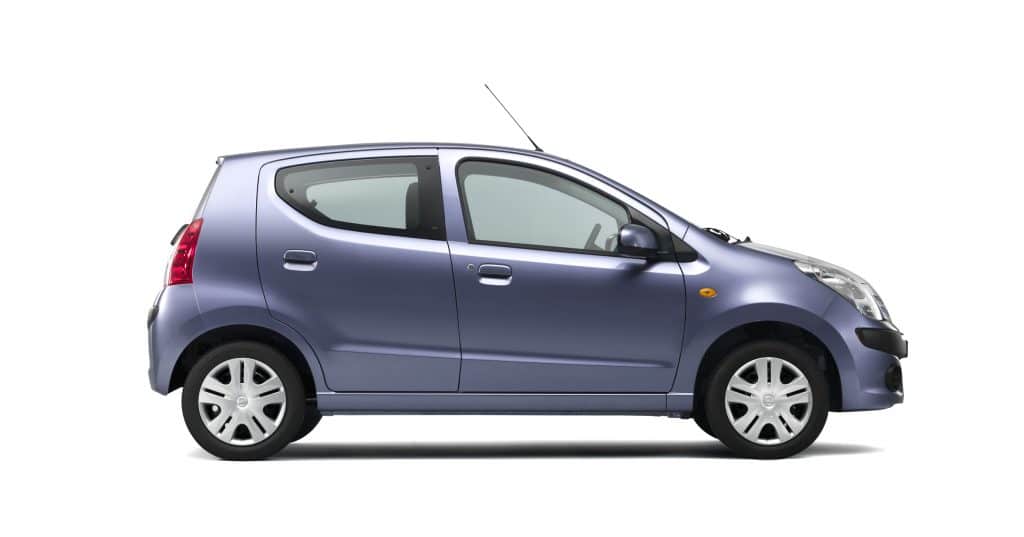 As a car, the humble Nissan Pixo is a fairly uninspiring thing. It’s not particularly dynamic, it’s not exciting, it’s not fast. It’s not a lot of things, frankly. So why, then, are we giving up some of our prime digital real-estate to talk about it? Why are we offering a word of buying advice on a car so dull it could make beige look fluorescent?

Well, firstly, because it gives us an excuse to use this utterly terrible press shot. The ‘oh you’ look on the woman is particularly brilliant. As if he said, “Why did you buy a Pixo, you numpty?” and from her little, disillusioned bubble, she played it off as a cheeky quip.

Also, she’s texting whilst driving. Silly woman. The Law takes a dim view on that. But hey,it could be worse, she could be sitting in front of her Pixo, listening to Enya with a friend. Technology, eh? Hasn’t it made us closer?

Anyway, that’s enough about dubious and somewhat nonsensical press shots. Though if you want some more, you can always head over to our review of the Citroen C4. You know, if you like that sort of thing. If, however, you like small if somewhat boring city cars, read on.

The Nissan Pixo was a joint venture between Nissan and, unusually, Suzuki. The latter would go on to name its car the Alto. Nissan went with with Pixo, presumably in a bid to make it sound more exciting than it actually was.

It was a clever partnership though. The Alto has been a Suzuki mainstay since 1979. Nissan could have easily made its own tiny car, but when you can just borrow someone else’s design and slap your own headlights and badges on it, why bother? Maximum showroom impact, minimal outlay. Shrewd.

The Pixo was unleashed on us in 2009 and it was the prefect car for people who had a hard time making their mind up, mainly because it only had one engine option. That said, it was an oddly charismatic engine thanks to being a raspy three-cylinder, and at just 1.0 in capacity, it was more frugal than Scrooge in a grotto. It did only have 68bhp, so it wasn’t fast. But if you’re looking at a Pixi with dreams of speed, you need help.

Transmission-wise, the most common was the five-speed manual. It was and still is a crisp, tight transmission that you feel connected to. The same can be said of the steering. Yes, it’s very, very light, but it’s also direct and engaging.

On the whole, the Pixo isn’t a bad car to drive. It goes where you point it with a pleasing eagerness, and throughout it all you feel like you’re part of the process. Though you will want to rip your own eardrums out if you take it on a motorway for prolonged periods. So, you know, don’t do that.

Inside it’s nice enough. The driver’s position is lacking in adjustment, which will annoy taller drivers, and the dash, while logically aid out, is made from the same sort of plastic as the soles of school shoes from Shoe Zone. It’s not refined. But, it’s functional. And with five doors, it’s practical, too. At least from a passenger point of view. Sadly, the boot is about the size of a Kinder Egg, so you won’t be haunting the B&Q loading bay in this.

On the whole, the Pixo, while not thrilling, is a decent little car. It will gt you where you’re going, it won’t break down and it’ll cost you about 12p a year to run. If you drive it into something big, like a wall or a giraffe, it should keep you safe. EuroNCAP gave it three out of five stars.

A proper ‘driver’ isn’t going to see any appeal in the Pixo, and we can understand that. But as a second car in the household, or even better, as a first car for a new driver, there are few cars that fit the bill so well. The Pixo is a ‘nothing’ car, in that it’s not boasting an image or a forced personality. It is just, from bumper to bumper, a car. And for some people, that’s all that’s needed. And that’s just fine.