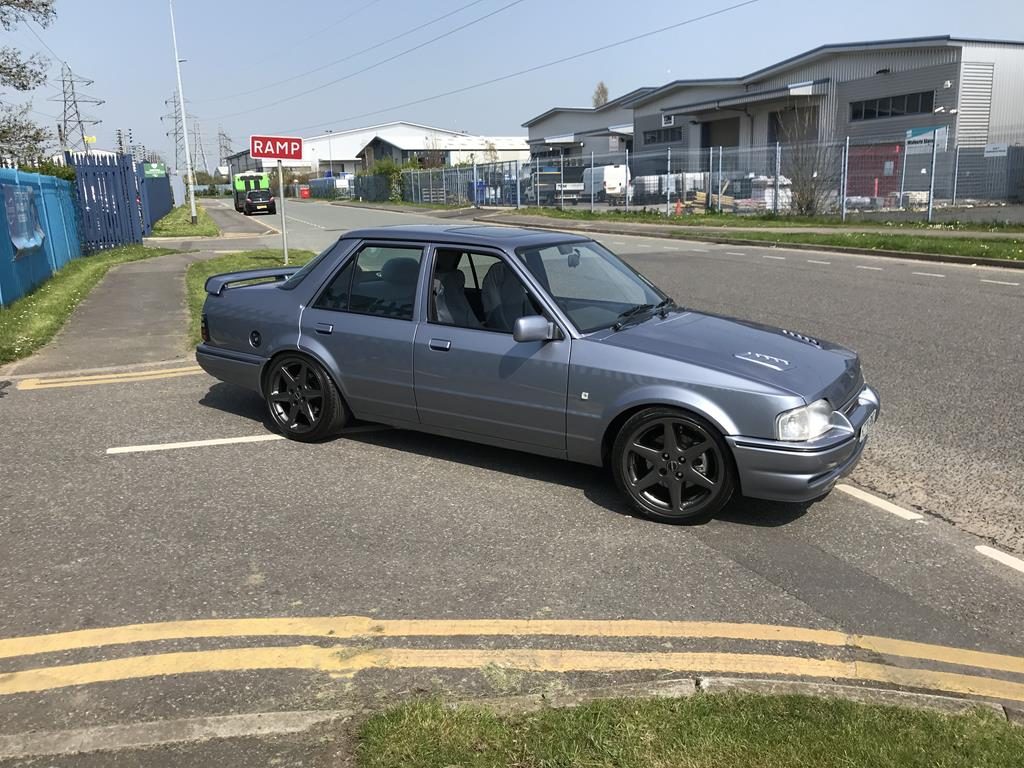 We’re flogging our contributors at the moment, aren’t we? First Toby is telling you about a Porsche and now N2G regular, Mark Longland, is telling about the… oh, right… the Ford Onion. Sorry. Orion. Convince us, Mark. You have our ear…

In the 1980s, Ford found themselves lost in space. The recently launched VW Jetta was selling well; it had a new appeal as a small family saloon. Ford had no direct reply to this, despite both the larger saloon (the Sierra) and a hatchback (the Escort) holding their own in their respective segments. Enter Orion.

The Orion was launched in a time when design solutions were as functional as the problem encountered. “The Escort needs a larger boot, you say? Here, we’ve stuffed a box on the end of it!” (an actual quote from an actual Ford designer, there). This gave the Orion a remarkable silhouette, one which is instantly recognisable to this day. The overhangs are iconic; the Orion has a low-slung, sporty, slightly menacing presence to it. No mean feat for a small family car.

Orion was an astronomical hit, reflected in the sales figures. It was reportedly the seventh best-selling car in 1987 and 1988. Seventh. Let that sink in a moment.

The specific model we’re most interested in, however, is the Mark II, made from 1986 to 1990. Arguably the Orion with the most recognisable ‘face’.  Ford offered the MkII with a fresh suite of options over the MkI, such as heated front windscreen, ABS, improved door locks, sunroof, electric windows, rear headrests. All galactic stuff for the time. Sarcasm aside, with MkII variants now 31-years-old, there is considerably less to go wrong than, say, a 10-year-old S-Class Merc.

Furthermore, if something oily were to break, looking under the bonnet of one of these wouldn’t fill you with dread. Everything is in its place, where you’d expect it, plenty of space to get hands and tools in. Even a wannabe mechanic (such as me) would be tempted to get greasy and give things a few love taps with a hammer if needed.

Model variants included L, LX, GL, Ghia, and Ghia Injection models. Special edition Biscane, Equipe, and GLS variants appeared, as well as a 1600E (the E stands for Equinox – arguably the most tenuous of the astronomical references). However, the Ghia is probably the one you want. And the one your Dad would want. And the one your Dad probably won’t stop talking about if you got one. (Personal opinion – the MkIIs look absolutely stellar in red with black bumpers, ‘pepper pot’ alloys, and some enormous fog lamps).

Various engine choices were available, but the 1.3 and 1.6 “CVH” petrol engines are the most sought-after. Worth noting the ‘H’ in this abbreviation stands for Hemispherical. It’s a Hemi. A Hemi for less than £2k? These units in particular are renowned for being easy to tune and therefore popular on the tuner scene, even to this day. The 1.6 unit was even shared with the XR3i. Unfortunately this did attract the attentions of Bastards, and many an Orion did fall victim to being nicked (tell me about it – Ed). So much for the uprated locks.

As previously mentioned, the ease of engine tuning and the stance of the Orion mean they are popular with Ford enthusiasts. It’s not on the same level as Escort RSs, or Corintas, etc. But that’s not a bad thing. Have you seen the prices some of those mint, restored Fast Fords go for?! A cheeky MkII Orion may just tick all the boxes…

Near-mint examples now fetch anything north of £5k, but viable working alternatives can be found within our £2k budget. A prime example of one is a 1990 Mk2 ‘GL’ with 22k miles on the clock. Except it isn’t 22k miles, because the counter has gone once round. 122k it is. The owner has clearly spent some money on it, including adding the distinctive ‘pepper pot’ alloys, and the internals do look very good.

Unfortunately for the owner though, some Local Chopper has tried to lift it recently, meaning the passenger’s door needs a little bending back into shape. It’s all fixable, and it makes sense that this sort of thing is present on a car within Not2Grand limits. Further into the advert and sills are referenced – they’ve had ‘a touch of welding’ – and the service history is admittedly patchy. But there’s nothing wrong with this example. It isn’t a restoration. This isn’t even a rolling restoration. No black holes for your wallet. It’s a solid example of an old, mildly-collectable Ford, with a ‘to do’ list. All this stellar Orion goodness for 1,200 of your Earth pounds.

So, what are you waiting for? It’s a cosmic Ford.

And if you still need convincing, clicking THESE WORDS will take you to the build thread of the Orion above, which is, frankly, delicious.