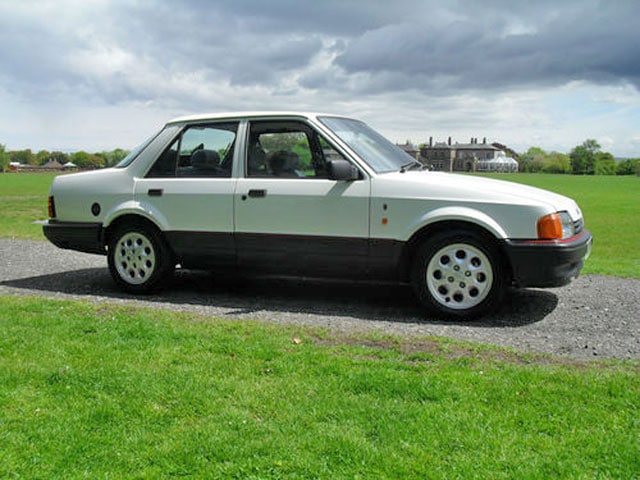 I have no idea where to start with this one. All of my cars have lacked quality and/or substance, but this mechanical monstrosity was in a league of its own. To this day I still believe it was possessed by some sort of evil spirit. That, or it was just catastrophically shite. Anyway, here’s the only picture I have of it.

Looks fairly unassuming, doesn’t it? It wasn’t. It was evil. Pure, unbridled evil. Though that’s something I only came to learn with hindsight, because at the time I thought it was utterly amazing. It had a Peco Big Bore 4 so it had to be amazing, right?

As I hinted at in the tale of my Astra, I had prior knowledge of the Orion 1.6i (EFi) Ghia. It belonged to Tony, one of the ‘bigger boys’ who frequently came to visit my neighbour, Mark. It always caused a stir when it arrived, mainly because most young men in my area drove cars held together with cable ties and sheer willpower. A car like this, in one colour, with big wheels, a noisy exhaust and no dedicated police focus was the stuff of dreams. With that in mind, I had to have it.

Long story short, I came into some money, bought a ’94 Mondeo despite not having a licence, Tony saw said Mondeo and offered a swap for the Orion. Deal – done. Me – colossal idiot.

Tony knew what he was doing, I know this because he fell off the earth shortly after the deal was done. In fact, I’ve not seen him since. That should have been my first clue. The operative word there being “should”. I didn’t care though, I had an Orion. Though suspiciously, it no longer ran. Annoying to say the least.

This guy had the right idea – leave it in a ditch and walk away. That’s what I should have done

Now there’s all kind of tales from this heap such as me trying to fit a water pump with all the mechanical know how of an otter. There’s the time I managed to set it on fire while removing the temperamental alarm (always disconnect the battery, kids) and there’s the balls up that was me trying to de-badge the bonnet by filling the recess with filler only to then be crudely painted over with model paint. All true, and all offering some degree of humour. However, those failures came by my hand, which is to be expected. What makes this car ‘interesting’ is the fact I sold it. Three times. And it came back. Erm, two times.

Had my Orion in fact been a ’50s Plymouth, I probably wouldn’t have minded as much

Much like the above film (yes, I know I’ve referenced it twice in this blog now) my Orion had a mind of its own. It would lure people in, potential owners in fact, and it would dazzle and amaze. The panels were straight, the wheels expensive. The trim was mint and the engine once again ran like a dream. It truly looked the part. So understandably they’d want it, and in the case of victim number one, or Mike as he was known, they’d take it.

I was happy I’d offloaded the heap. It had clearly been driven to within an inch of its mechanical life by Tony and I was an idiot for buying it. Lesson learned, move on. Or not, as a phone call 20 minutes after its departure would have it.

Riiight. I was baffled. Mike and I were friends, we got on like a house on fire. This was wildly out of character. I went to bed confused, but resolute in the fact that I could no doubt smooth things over the following day. So, the following morning, I got up as planned, walked downstairs, glanced outs… IT WAS BACK ON THE DRIVEWAY.

Not mine, emphasised by the lack of a terrified Mike

I was given no reason for its return, or why it had been brought back without notice. I paid Mike the money he’d given me and that was it. The friendly status quo returned and the Orion wasn’t mentioned again. It was weird.

So, I sold it again. The guy seemed keen as mustard on the phone, but why wouldn’t he? I only wanted £400 for it by this point (2001 folks) and the wheels were worth that. It’d be a done deal, or not actually.

Giddily bouncing down the stairs upon hearing the sound of a heavy diesel pull up outside my house, I folded my face into a smile ready to greet the new owner. I never got the chance – peering out of the window, I watched the van carry on past my house, turn around and then disappear. Though not before taking note of the horrified look on the driver’s face as he offered the Orion a fixed stare in passing.

He didn’t answer my calls after that.

I finally sold it – for a third time – to a friend of a friend. At just £200 I’d taken a heavy loss, but to be honest I was just glad the bastard was gone. Though in my naivety I let the car go on the basis of trust, expecting payment later. This was a foolish move on my part, because less than 24 hours later, it was toast.

I know, I know, it’s a later model. Just go with it

The story goes that street urchins, or youths, or rapscallions had done the deed. Though to this day I remain unconvinced. I think the buyer took matters into their own hands and killed it. Killed it for being something so repulsive that nobody would ever love, cherish or maintain it.

That, or it was my bodged wiring from when I buggered about with the alarm that started the fire.

Meh, who knows? All that mattered was that it was dead. And besides, I’d just bought a 1973 Volkswagen Beetle.