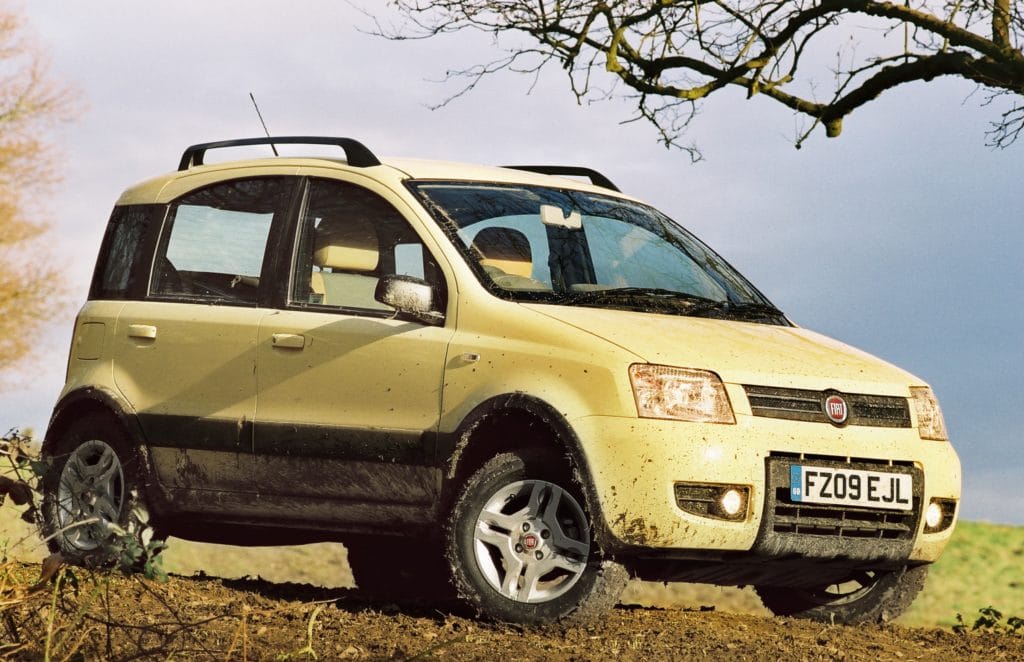 In the history of Not2Grand, we’ve never done the same car twice. That is of course, until now. But there’s a good reason. You see, the Fiat Panda 4×4 is a wild departure from the Panda 100hp we featured last year. Mainly, um, because it’s four wheel-drive.

You wouldn’t ask the 100hp to do the same stuff you’d ask the 4×4 to. For example, if you drove the 100hp into a river, you’d get a wet bottom. If you did it in the 4×4, you’d laugh manically before deciding which mountain to drive over next. Because you could. Well, you could probably get to base camp of said mountain, and for a small, unassuming Italian car, that’s still pretty good.

Yes, the Panda 4×4 is a brilliant little ‘go anywhere’ car. It might not have the hard-fought off-road credentials of bigger 4x4s, but that doesn’t matter. If you want to square it up against a Discovery you’re an idiot. They’re not the same thing. The Panda 4×4 doesn’t make bigger 4x4s its bitch. It instead makes a humble car immense. And for that alone, it should be praised.

It all started in 1983, when Fiat, in its infinite wisdom, decided the world needed a off-road Panda. The world didn’t need such a thing at all. But like so many things we acquire throughout our lives, need falls by the wayside in favour of want. So no, we didn’t need it. But when Fiat slapped the four wheel-drive system designed by Steyr-Puch under the cheap and cheerful Panda, we wanted it. It was daft, it was pointless, but it was also remarkably capable.

This wasn’t a car that cashed in on the 4×4 look like so many modern cars do. No, this was the real deal. It was a proper, albeit tiny, off-roader with terrier-like willingness to scramble up whatever terrain you put in front of it.

The 4×4 system was basic, but it did the job. The system itself was manually selectable, with an ultra-low first gear. Under normal conditions starting came via second gear, with the fifth gear having the same ratio as fourth in the normal Panda. It’s also worth noting that this was the first 4×4 system to ever utilise a transverse engine layout. Some proper thought went into it, it wasn’t just marketing.

The original Panda left a legacy. We all loved the cheeky, basic little thing, and many of us loved the 4×4 even more. So it should have as no surprise to Fiat that when, in 2003, it gave us a new Panda, we all pawed at the dealership glass like zombies looking for brains. But in this case, substitute brains for off-road shenanigans.

Fiat scoffed, and instead tried to make us buy the normal Panda instead. And some of us did. It was, after all, a good little car. But for many of us, mere front wheel-drive wasn’t going to cut the mustard, so in 2005 Fiat buckled and gave us another 4×4. We rejoiced. Then immediately drove into rivers.

The Panda 4×4 was, to the untrained eye, nothing more than a slightly taller normal Panda. The more keen-eyed would spot the roof rails, or the different bumpers, but really there wasn’t a lot to give the game away other than the ‘on stilts’ appearance. It was on the road, or more accurately, off it, that the Panda 4×4 shone.

And that’s the thing you have to remember. While it’s great to say that the Panda 4×4 is a proper 4×4, not just a car cashing in on the looks, you have to take that as a bit of a warning. You see, Panda 4×4’s off-road ability came at the expense of what it could do on-road. A standard Panda is light, fun, direct little car to pilot. The 4×4 is light and fun, but it’s not direct. In fact, we’d go so far as to say it’s a bit top-heavy thanks to being so tall. And that ruins things somewhat.

But if you presented the normal Panda with some mud, or a river, or a path never trodden by car, it would fall on its face. The 4×4 version wouldn’t. That’s why you buy one. If you’re looking at this and thinking “that’d be fun” you’re right, it would. But only if you live a life that justifies the functionality of such a machine. If you live in the centre of Bristol and the closest you get to being off-road is the gravel car park of an artisan tweed hat shop, this car isn’t for you.

The Panda 4×4 is, much like its 100hp brother, exactly what you make of it. And that’s part of the charm. It’s not the biggest, baddest 4×4 – the 1.2 petrol engine sees to that (but there is a diesel if you want a bit more torque), but nor is it a piss-poor facsimile of a 4×4. It is capable. When the snow comes, when you want to go an adventure, when you want to have fun, the Panda 4×4 will be there, it’ll be willing but most importantly of all, it’ll be capable.

And it’s such an odd, unexpected car. By that, we mean it has no bravado. No false image. It is what it is. You could be a petite 20 year-old girl or a bruising 20 stone bloke, nobody is going to question your Panda 4×4. It just… is. And that’s a rare charm in a car. Especially now, in time where everything is trying to be GTi this or luxury that (looking at you, Fiesta Vignale).

But don’t worry, the Panda 4×4 isn’t something you should buy just for the charm of the thing, though it’s perfectly understandable if you do. It’s a good little car. There is more than enough room for four adults. The visibility is spot on with no blind spots, and the suspension is comfortable and smooth (if a little ‘rolly’ in corners). Plus, you do get some grip benefit from the four wheel-drive system.

But it doesn’t need to be fast, because it’s fun. And in this day and age, fun is what we need. If you buy a Fiat Panda 4×4 you’ll thanks us, you really will. You will be able to laugh and have adventure after adventure. The Panda is just cheeky enough to even encourage you to have them. And that’s special. And all for less than two grand.