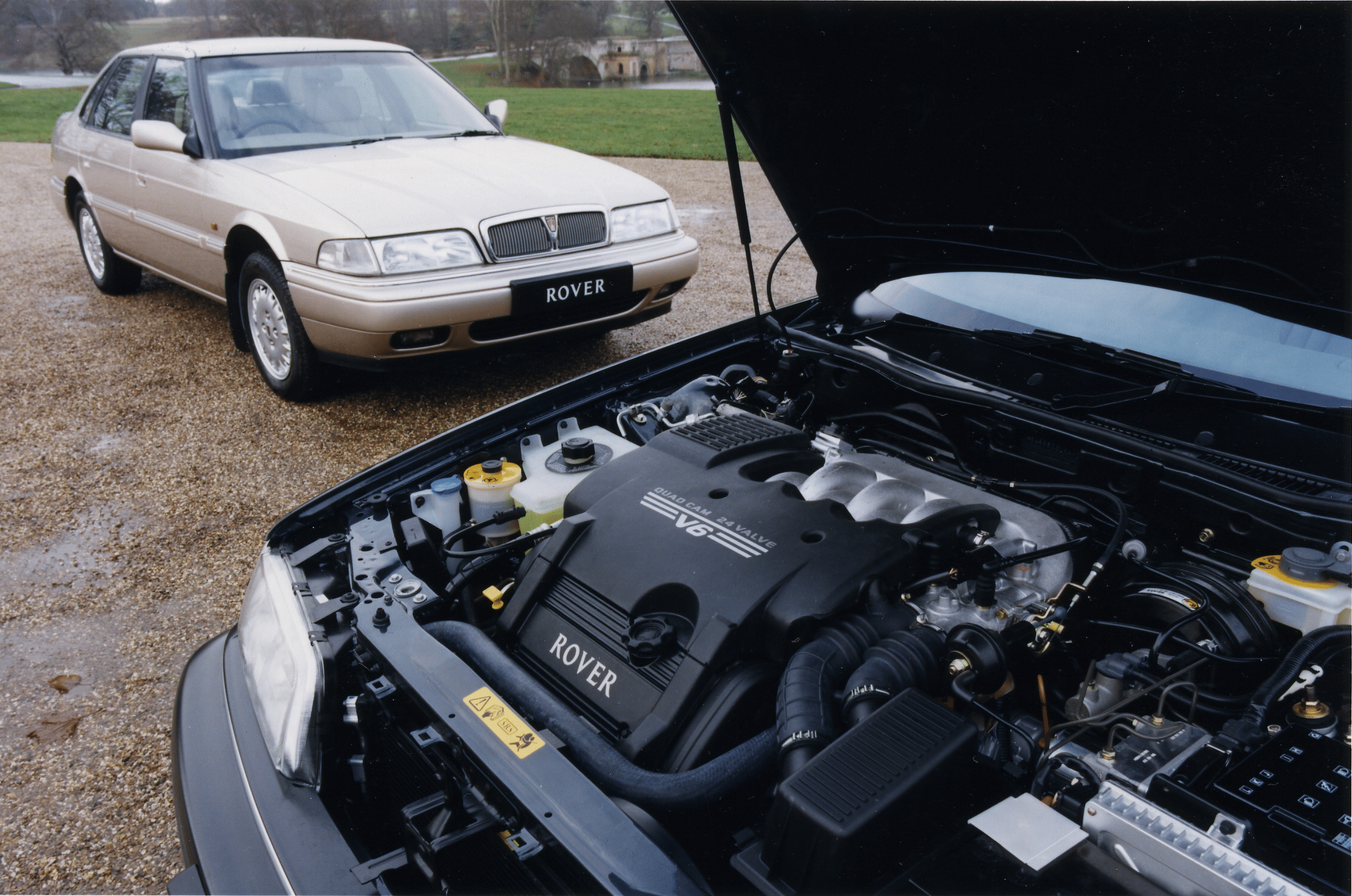 Hmm, the Rover 800. We have history here, or at least Pollitt does. That one was a dog though, because Pollitt bought it. He should have seen it coming, the mug. But even so, such were the charms of the Rover – specifically in Vitesse guise – he’d actually have another one. And if you’re looking for an appreciating classic, you should. The Rover 800 is a car that’s overshadowed by the old wive’s tales surrounding the company that made it. That’s unfair, because the Rover 800 was a great car. Especially in ‘heavy facelift’ R17 form.

This car is so old, the press shorts aren’t even in colour.

So, let’s start at the beginning, namely the 1980s. A time when TVs were heavier than hatchbacks and the internet was a term for fishing apparatus. Also a time when Rover was booming. Yes, the workers were surly, the midlands climate didn’t inspire anyone and the head office was full of people called George and Malcolm, but still, Rover was knocking out cars and we, as a country, were buying them. We’d then complain about them, because British, but we’d buy them all the same.

By this point, Rover, or should we say British Leyland, had already jumped into bed with Honda in what has to be the most boring affair in history. There were no sex swings or safety words in that relationship. Still, Rover got it right and took the engines and some other engineering bits, leaving the looks to British hands. Whether or not the latter point was a good thing is open to interpretation.

The two car giants (Rover was huge, remember) tried to make a mid-size family car work, but BL was having none of it. And why would it? With design classics like the Montego and Maestro on the books, perfection had been achieved. At least according to George and Malcolm et al.

Thankfully, Honda wanted a big, luxury car. And due to the age of the SD1, so did Rover/BL. As such, the Rover 800 project, code name XX, got underway.

Honda wanted to get into the North American market, but its biggest offering was the Accord, and that wouldn’t cut the mustard, or wasabi for that matter. A big car would though. Development got underway at Rover’s Cowley plant as well as Honda’s easy to say Tochigi plant. In Japan, they called it the HX, which showed imagination equal to that of Rover. It was a match made in heaven.

Now you may be thinking: “Hey, Not 2 Grand, you crazy cats! I don’t remember seeing anything that looked like a Rover 800 but with Honda badges!” And you’d be right, because you didn’t. What Honda knocked out was the Legend (bad ass name, Honda). You see, the XX and HX shared their core and floorpan design, but that’s it. The metal over the top and the foam and leather inside was completely different.

As for the oily stuff, Honda stumped up its 2.7 V6 engine, while Rover threw in the four-bangers. The rest, as they say, is history.

The first Rover 800 was an impressive beast. It boasted a decent level of equipment. The ride was excellent and the overall fit and finish was good. It was a solid car, and when ordered in 827 V6 Vitesse specification, it was fast, too. The Police loved a Rover 827, we can tell you.

Fundamentally, it was a huge leap forward for Rover and BL. Their other offerings had been terrible up to that point, so the 800 was a welcome shattering of the mold. It was a commercial success, too. It made buyers take Rover seriously, though it helped if salesmen took the Montegos and Metros out of the showroom if any 800 customers were expected.

However, as with anything from Birmingham, it started to date pretty quickly. The core of the car was impressive. It benefited from fully independent double wishbone suspension, disc brakes all-round, decent steering and more. But still, it looked a bit old a bit dated very quickly. Like that aunt you only see at Christmas.

Just to be clear, this is a toy, not the real thing.

With sales starting to dwindle, Rover gave the car a significant makeover for 1991. It was still the same core, just with a shiny new metal suit. It brought back the more traditional-looking grille along with other breakthrough design ideas like curves. The resulting car, the R17, was a handsome beast.

Much like the first generation car, it offered the buyer saloon or fastback options. Rover didn’t stop there though. It busted out the big guns and dropped the Coupe onto showroom floors, and man alive, was it a magnificent beast.

As before, the R17 used the Honda V6 along with a selection of Rover engines. Thankfully, the four-cylinder Rover engines weren’t the ones with hideous head gasket issues like the 75. So reliability was pretty good, you know, for a Rover. Oh, and they also bolted a turbo to one and gave us the Vitesse, leaving the V6 to the luxury-focused models like the Stirling. Available in all three body styles, it was a stunner. In fact, to our slightly warped mind, it still is.

WE HAVE AN ERECTION.

The R17 was given another slight facelift in 1996 before being killed off in 1999 in favour of the 75. During its run, it was a great car. It outsold the Ford Granada and became Britain’s best-selling executive car in the process. The 800 was not a failure, no matter what that dick down the pub tells you. Yeah, the Vitesse ate gearboxes for fun and yes, the build quality was a bit off and yesssss, they liked to rust. But come on, we are talking about a Rover here.

So why should you buy one? Well, Rover should be celebrated and cars like this are a good way to do it. The company may have had its issues, but it did knock out the odd decent car before its demise. And the 800 is a case in point. Plus, as a car, it’s good. They’re comfy, fast with the right engine and they’re bloody massive. Not only that, they ARE an appreciating classic, but one you can use daily, unlike a P6 or something of that ilk. Like the P6, current owners tend to love and care for them, so the cars out there are good. Rover certainly isn’t going to be making any more, so this is you last chance.

Obviously, the top-spec Vitesse commands the dosh. But seriously, buy one and you’ll thank us. Do it, make Britain proud.