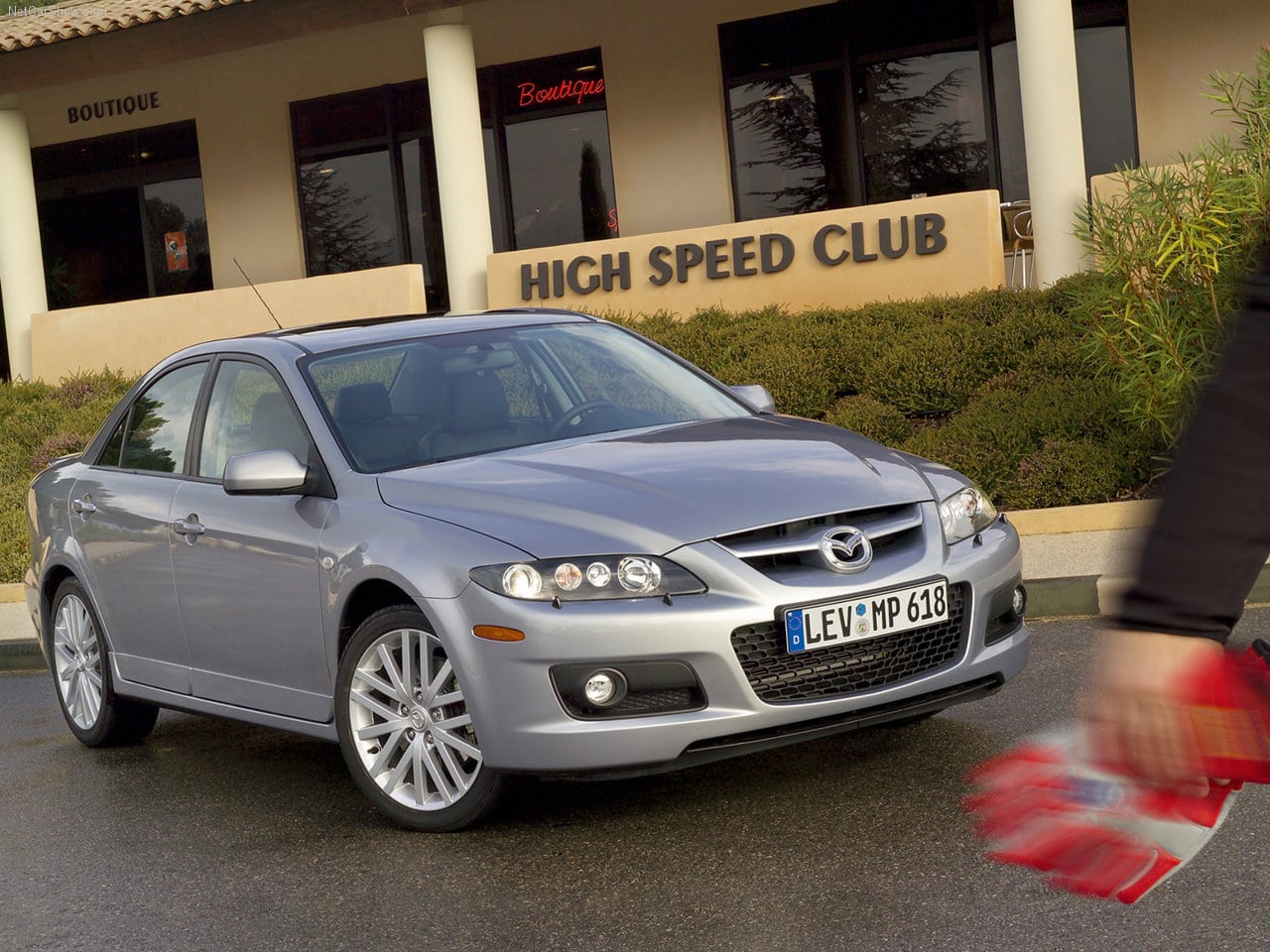 There’s something inherently cool about witnessing the unexpected. Like when the quiet kid at school swore at the English teacher. Or when your mum punched that bloke at the Post Office. It’s exciting, and it brings out a primal thrill that we all secretly love. It transcends beyond first period English or Mum-boxing. It can be found in cars, too.

The term you’re looking for here is ‘sleeper’. In the car world, sleepers are a big deal. Folk love seeing normal-looking motors take on the big boys and win. Like this fella with his Nissan Maxima, which nails a Porsche to the wall. Impressive stuff.

However, sleepers tend to be subject to many modifications. It’s rare for a big manufacturer to build one. Unless of course, you’re Mazda. In which case you knock out the 256bhp/280lbft Mazda6 MPS. yeah, that should do it.

See, it’s really dull and nondescript to look at. At the time of its release in 2006 the motoring press were left a bit, em, bored by the Mazda6 MPS looks. You have to remember that this was a time when the Impreza and Evo were hugely popular, with their vents and wings and stickers. They were the barmy saloon cars. Hell, even a Mondeo ST220 had more visual aggression than the Mazda6 MPS. The Mazda just didn’t look exciting enough. You’ve probably parked next to one and not even realised it.

It’s not a bad looking car though, far from it. But for the time it was released, the fire-breathing version should have had more visual cues to engage people. it didn’t though, and as such, it was largely overlooked. A shame really, considering what lies beneath.

It wasn’t much better inside, either. As you’d expect from Mazda, the fit and finish of the Mazda6 MPS innards were good. Mazda truly does know how to screw a car together, and even now, 11 years on, they still hold up well. That’s impressive, because most Subarus and Evos become a rattly mess in seemingly no time at all. If they manage to avoid being wrapped around a tree, that is.

The steering wheel was swathed in leather. The sports seats were deeply comfortable and the driving position was considered to be one of the best in its class. Good work Mazda. So yeah, the dash didn’t thrill the eyes, but it wasn’t particularly offensive either. And we’d take well-built but boring over dynamic and rattly any day of the week.

Right then, it’s not particularly exciting to look at and, sport seats notwithstanding, it’s a bit dull on the inside, too. So why in the name of sweet baby cheeses is it here? Well, because it’s a bloody animal mechanically, that’s why. We didn’t start this post off by talking about sleepers for no reason.

The Mazda6 MPS packs 256bhp and 280lbft. It’s got a six-speed manual ‘box. And it’s four-wheel drive. The Mazda6 MPS might have lacked the visual appeal of its other Japanese rivals, but it by no means lacked the appropriate punch. Make no mistake, this was and still is a fast car. The casual observer would have no idea though. And while that was a bad thing back in 2006, we can’t help but think it’s a good thing now. The MPS is for you. It’s not there to shout about its power to the masses. It doesn’t want to be acknowledged. It just wants to be a car when it needs to be and powerhouse when you want it to be. This is a good thing.

Under the bonnet there was Mazda’s 2.3 inline-four petrol engine. It was twin cam and had 16 vlaves, as you’d expect from any modern motor. Plus, it benefited from a timing chain rather than belt. It also had direct fuel injection – a first for Mazda. It was and still is a great engine. Effortlessly smooth and happy to rev, it was always eager to please whoever was facing the pedals. That wasn’t all though. Mazda strapped a turbo onto it, because why the hell not?

All of that was mated to a six-speed manual transmission, and as you’d expect from the same people who knocked out the MX-5, every gear change is a crisp, direct joy. The ratios were spot on, with no hugely noticeable drop off in power until you got to the top of the rev range.

Engine and gearbox alone would have been enough to make this car special, but it didn’t stop there. Mazda also bolted a clever all-wheel drive system to the MPS. It focused mainly on keeping the car front-wheel drive, but if the yaw, lateral g and steering angle demanded it, the MPS could put up to 50% of that 256bhp to the rear rubber.

The all-wheel drive system also helped the Mazda6 MPS get to 60mph from a standing start in just 6.6 seconds. Not bad for a large car. Then of course there were the driving aids. Unlike other cars, the MPS chose for the driver. It had normal, sport and stability to choose from and would do so in relation to the driving conditions. A very clever system really, and one that lets the driver concentrate on just that – driving.

Reviews of the car were impressive, though many were keen to point out that steering’s unusual weighting sometimes left the driver in the dark as to what was going on with the front wheels. That’s a shame, because the MPS would have been the full package were it not for that. It’s not a deal-breaker though, unless you commute to work via the Stelvio Pass.

See what they did there? Race boots… because it’s fast.

So, what about buying one? Well, we have to be honest here – a sub-£2,000 MPS is a hard thing to find. However, they are out there if look. Yeah, you’re going to be looking at one with higher than average miles, but the 6 wears them well, so it’s not a major concern. Also, unlike the Subarus and Evos of this time, the Mazda6 MPS generally hasn’t been flogged to within an inch of its life. Or fitted with dubious modifications like BK Racing £299 ‘wheel and trye’ alloys from Halfords.

Fundamentally though, you’re getting a great car. It’s the kind of vehicle that makes those in the know share a nod with you. And as we said, it’s a car for those who love driving, but don’t want to shout about it. Speed doesn’t need to be covered in a luminous hue and spoilers. It can be understated and subtle, and the MPS delivers that with aplomb.