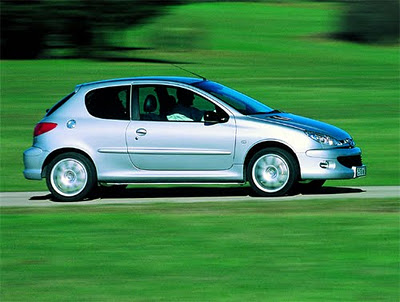 Fancy a bit of this high-flying action in your life?

Well, sorry, you can’t. You’re probably not a rally driver and you’ve probably not got £250,000+ to spend on a works car. In fact, you definitely haven’t because you’re reading a blog about cheap cars. Plus, if you tried that on the A627 you’d end up in a ditch. On your roof. On fire. Backwards. As much fun as flaming, rear-entry ditch endeavours are, we don’t suggest them.

You can get (sort of) close, though, if you buy a Peugeot 206 GT. No, not a GTi, a GT. It was the mechanical predecessor to the 2.0 GTi thanks to what was at the time a new 2.0 engine, along with being the hologomated version of the rally car you see up there trying to put its wheels where its roof should be.

Not only does have rally pedigree (sort of), it’s also really bloody exclusive. It could well be one of the most exclusive cars we’ve ever splashed across Not £2 Grand actually. Peugeot only had to build 2500 to meet holomogation regulations, but they actually went ahead and knocked 4000 together. You might not think that 4000 is particularly exclusive and you’d be right, 600 on the other hand is very exclusive and that’s exactly how many Peugeot made in UK friendly right-hand-drive.

The GT stands for ‘Grand Tourisme’ which isn’t anything to do with the PlayStation game, it actually means ‘Grand Touring’. A wise name really, as touring around is something it does rather well.

As a holomogation car it does have some sporty aspirations, too. It’s the road-going justification of a 300bhp World Rally Car after all, so it couldn’t be solely built around comfort.

Under the bonnet resides a 2.0 16v engine complete with 137bhp and five speed transmission. The interior is made up of half leather sports seats, drilled metal pedals, a sporty gear knob and a metallic sports instrument panel with oil (oooh) and temperature (ahhh) display. Okay, so it’s somewhat lacking in roll cage, Sparco bucket seats and fire extinguishers but trust us, they’d just get on your nerves every time you popped to Tesco Express.

Externally there’s that, er, interesting body-kit, the one that makes it look like a bullfrog. The long beak and wide grill along with the stretched out rear were required as part of the holomogation process to increase the overall length of the car to match that of its WRC counterpart – the forest bashing, crest leaping rally car came in at 4m, while the road car only measured in at 3.83m. Small arch extensions and a subtle spoiler help balance everything out.

Just like a rally car, in the same way a toaster is just like a Springer Spaniel

On the road, any sporty 206 was going to have its work cut out. Not only would it have fight against the competition from the likes of Ford, Renault and Volkswagen, it would also have to go up against its predecessor: the 205 GTi. On the latter front, it failed somewhat because the 205 had one of the best chassis ever, it also weighed around 23 tons less. When it came to its peers, though, the 206 did rather well despite only having 137bhp. It’s no wonder the 2003, 180bhp GTi was such a success!

It was tight, nimble, responsive and whole load of other motoring clichés that us motoring hacks throw around. Basically, it was a giggle, exclusive and incredibly well kitted out, and with that it was well worth the £16,000 the people at Peugeot wanted for it.

You’d think that in ten years the value would have stayed high for something so special, but nope, they plummeted. The curse of the small French car? Who knows? All we know now is the 206 GT is a bargain, a bargain that is well worth your attention. If you want a fun, cool, exclusive car for notalottacash, the 206 GT is for you. You could even put a few stickers on it and pretend you’re a WRC driver. Just don’t end up in that ditch we mentioned earlier. On fire. Backwards.

An Interpretive Guide to Ebay Adverts…