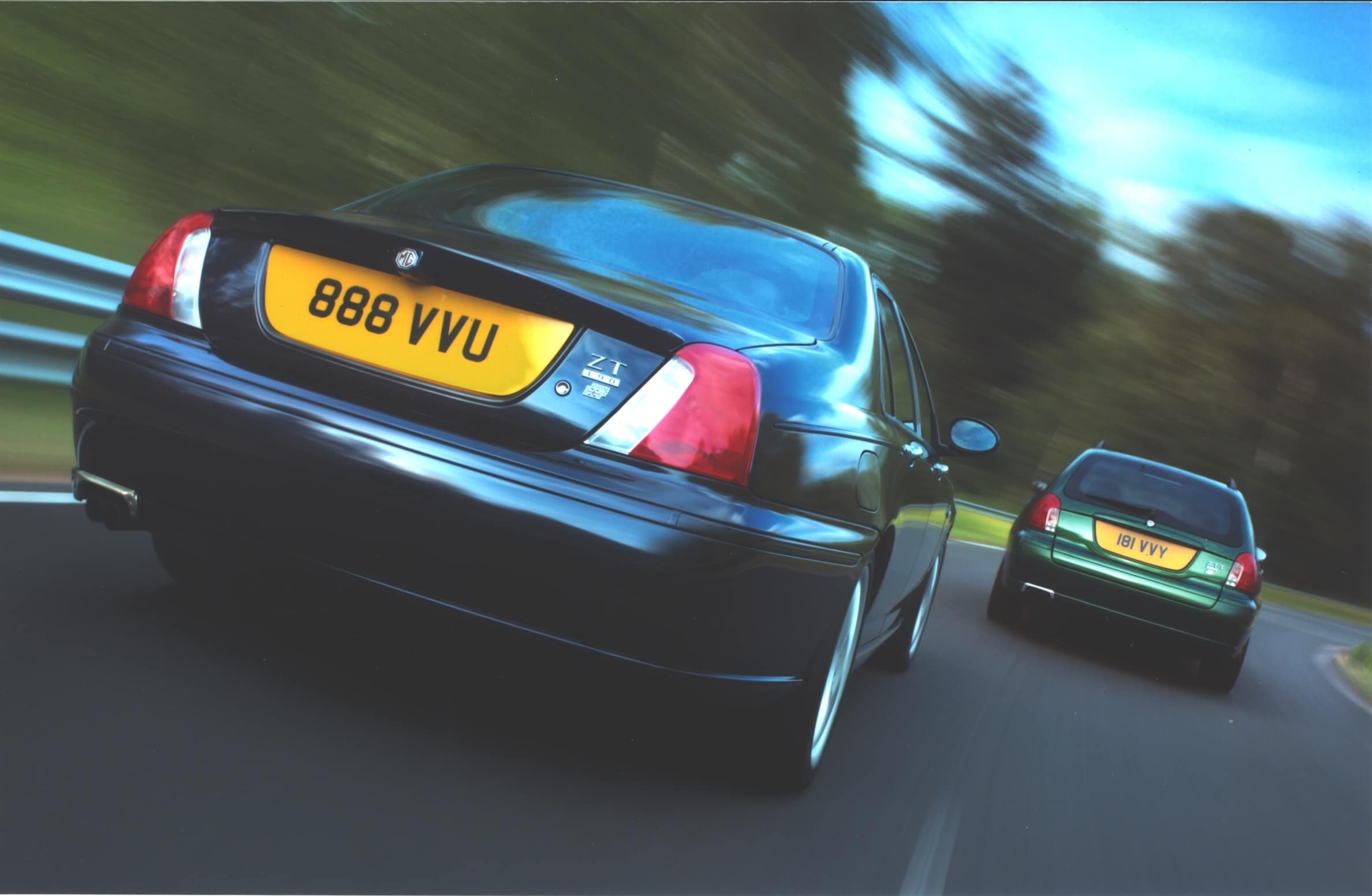 Now don’t get us wrong, but pop to Not2Grand towers and you won’t find pictures of the Queen on the walls, or towels with a Union Jack design. But we are patriotic, especially when it comes to motors. This national pride is evidenced by our posts about cars such as the MG ZS and of course, the mighty Rover 800. There’s something so ‘nice guy finishes last’ about modern British cars that we can’t help but like them. And that’s what brings us here, to the MG ZT.

Even the press shots have a faded hopelessness about them. Can’t get more British than that. Still, you can see the lines of the MG ZT, that’s the main thing. Also, for this update, we’ll mainly be focusing on the MG ZT-T. The T means touring, or estate to your dad.

We’re all about the ‘junk in the trunk’ here, we simply like large rear ends and we cannot say otherwise, you other chaps can’t deny that when a car drives in with a…no, we’re bored of trying to do something clever with Sir Mixalot lyrics. MOVING ON!

It was one of those cars the MG perfected riiiiight before MG/Rover’s sudden demise in 2005. Despite the reputation of the brand, they were a pretty good car, mainly because by 2001, some three years after the launch of the pipe-and-slippers Rover 75 equivalent, a few of the bugs had been ironed out. Just a few mind, not all of them. Far far from all of them actually, but never mind.

Out of patriotism and with a stiff upper lip, the British motoring press gave the car a warm welcome, though it wasn’t undeserving. It was a good car; handsome, spacious, comfy, quick (if you ticked the V6 box on the order form) and for its size it wasn’t too bad on the twisty stuff either. Plus, it somehow managed to hugely distance itself from its Rover sibling despite using the same body shell/ This was thanks to vents, spoilers and er, more vents! Oh, and some bright colours…like yellow.

All that might have had something to do with the fact that Peter Stevens penned the styling tweaks, which is good. Who, you say? He’s the chap who designed the McLaren F1, So it’s safe to say he was safe to be let loose with MG’s felt tips.

Yep, we can definitely see the similarities.

When it came down to power there were several options. There was the 1.8 petrol (or 120 in relation to the bhp) which was about as sporty as a fat man with a heart condition attempting a triathlon. Then there was the 2.5 V6 (or 160) as well as a 190bhp V6. Oh, and there was a diesel too, sharing the four-cylinder oil-burner with BMW, so it was bloody reliable.

The best engine however, was the 1.8 turbocharged petrol which, confusingly, was also called the 160 as it superseded the initial 2.5 V6 160… er, what? It produced less torque than the V6 (159lbft opposed to the V6’s 170lbft) yet still managed to be quicker to 60mph, taking just 8.5seconds – not bad for a big’un!

Oh, and there was the 260 which had a 260bhp 4.6l Mustang V8 bolted to a rear-drive floorpan engineered by Prodrive. Mad as box of frogs.

Inside the ZT you’ll find bucket seats, leather or half leather and alcantara, all the toys a grown man could wish for and a lot of comfort – it’s a really nice place to be. Some might criticise the seemingly weak visibility brought on by the thick C-pillars, but you needn’t worry about it. It’s not that bad once you’ve spent some time in there, in fact it just adds to making the cabin feel safe and enclosed.

Nice car all in all. That’s the thing though: while it is a great car, it’s impressive nature has been hugely overshadowed by the demise of the company that spawned it. The notion of an entire factory shutting down in a single day, leaving assembly lines full of part-built cars, while instantly forcing hundreds of people out of work. People who were left with a notice period measurable by hours for that matter. It hardly leads you to the conclusion of the car being well built, does it?

Soon after the closure of the factory the dealer network collapsed too, leaving Rover and MG owners in the lurch. That wouldn’t have been too much of a bad thing if the cars were issue-free, but they weren’t, not by a long-shot. Head gasket failure plagued the 75 and the ZT, specifically in the case of the 1.8 K-series engined cars, though the V6s weren’t much better. And with no company to back up the warranty a lot of ZTs ended up in scrap yards.

Yes, the MG ZT and ZT-T has a history littered with failure and misfortune, but that wasn’t the car’s fault. It’s British which means it has to have a story fraught with plight and desperation. That’s why people liked the car, and rightly so. It was (and still is) a great family hauler. We might say this about every car we feature, but with the ZT-T we really would buy one.

It looks great, goes like stink (if it’s the 1.8t) and above all it’s more than enough car for anyone. The cars out there today are great for the most part. They’ve survived the hard times, so now they should be bought, driven and appreciated. It’s also worth noting that while MG/Rover may be dead there’s no shortage of parts out there so maintenance isn’t an issue either, any decent motor-factors will be able to supply all the kit you’ll need to keep motoring. It’s a win/win.

Still not convinced? Well, what if we told you the MG ZT-T still holds the record for being the fastest (non-production) estate…in the world. Yes, really. 225mph, though it did have a Roush V8 engine with 800bhp. But still, that’s some cool bragging fodder.

Plus, the ZT and ZT-T are getting thin on the ground. Because of that, they’re appreciating classics these days. Seriously, the good ones are only going to go up in value. Now’s the time to buy. And who knows, in a few years you might actually make a profit. Madness.