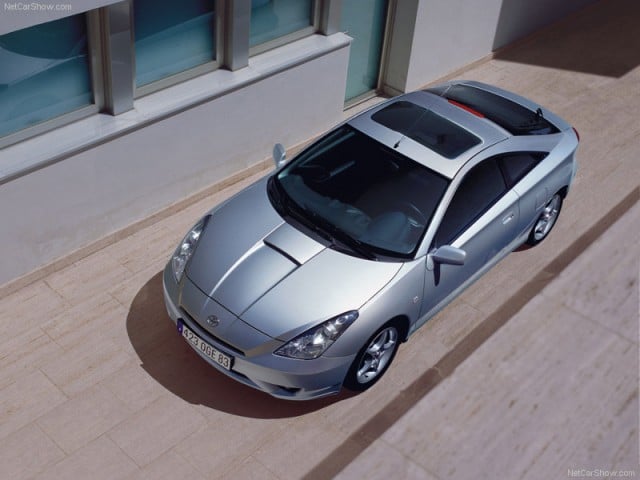 The Celica is a bit of a legend in motoring terms. It’s been around forever, it’s been a popular car both on the road and on the track and, unlike many others, it didn’t get fat and lazy in its old age. Sadly, the Celica is no more, but don’t worry, because there are plenty final generation models that you can get your hands on. All for less than £2,000, of course.

The Celica we’re looking at is the seventh-generation car, or the T230 series to its friends. The first-generation came about in 1970 and offered motorists a sporty, four-seater, rear-wheel drive car that looked fantastic. It was a hit from the start, remaining incredibly popular up until its (seventh generation) demise in 2006. Here’s a terrible picture of three of those seven generations in action, sort of.

It’s a good-looking machine for your hard-earned £2,000 too, and a lot of machine, too. It impresses with its specification first and foremost, though the rear wheel drive aspect has been swapped in favour of front wheel drive, sadly. Still, there’s a long list of other great attributes, which includes goodies such:

Leather trim, 190bhp (if you get a T-Sport, 140bhp if not), fancy fuel injection, six-speed gearbox, contemporary looks, alloy wheels and other stuff like carpet and glass.

That’s a lot of spec. The engine is the most impressive aspect though, as it uses Variable Valve Timing with intelligence (VVTi) which is a form of witchcraft and magic used to control the valves at varying engine speeds. According to Wikipedia “the VVT system is a 2-stage hydraulically controlled cam phasing system”. Er, yes, quite.

Basically it moves the cams and valve-timing around a bit so that you get solid power delivery across the rev-range. it also has economy benefits, too. Handy give the cost of fuel. It’s not exciting, but it is nice to have and it is reliable which is important when buying a car on a budget. Don’t, however, try and explain the principles of VVTi to your friends. They won’t be interested. Trust us, we tried while writing this and soon found we were alone… but still talking about VVTi.

So now you know about VVTi now, sort of. You can thank N2G for that! Anyway, moving along.

The selling point of the Celica as far as we’re concerned is the look of it. That is one slick, streamlined and sexy car. It’s low-slung and it’s got pointy bits amongst other attributes, and we like pointy bits. Crucially though, it looks modern – you really could imagine this sitting in a showroom today without looking too out of place. That’s why it fits in with the N2G ethos so well – no one would suspect you coughed up less than £2k for one of these!

Inside there is, as we mentioned earlier, some leather, four seats and some electric things that go ‘ping’ whenever they feel like it. A word of warning though: when you’re inside a Celica, try and focus on the drive. If you try and focus on the interior itself you’ll soon fall asleep because it’s not the most thrilling place to be. An odd juxtaposition when you consider the exciting external aesthetic. Don’t believe us? Think we’re being too harsh on the Celica’s innards? Fine, we’ll show you:

We can forgive it for its dull innards though, mainly because it’s modern, it’s a hoot to drive, it’s more reliable than a Swiss watch and it looks pretty damn good. It’s like a sexy Corolla or something, maybe.

The interior is also forgiven on the basis that the chassis is brilliant. Find yourself on a decent ribbon of B-road bliss and you’ll no longer be drifting into a ‘holy hell, that dashboard is dull’ coma. Nope, you’ll be brimming with enjoyment as you work the 1.8VVTi engine and six-speed ‘box. Getting the most out of one of the best chassis to be crafted by Toyota’s army of robots. It’s firm, surefooted and fills the driver with a feeling of being planted while still hanging onto a bit of enjoyment and excitement – it’s the perfect balance of safety and fun for any driver who likes to, you know, drive.

So, there you go, the seventh-generation Toyota Celica. It’ll never break down and it’ll always look great, unless you dick about with it, like so many have care of awful alloys or stupid suspension. Though be warned, if you do mess one up we’ll be left with no choice but send the boys around. You don’t want that, because they’ll hit you in the face with a copy of our 988 page book entitled ‘Car designers know what they’re doing, a man from Bromley with a £50 Halfords voucher does not know better’. It’s a great read… unless it’s being smashed into your face.