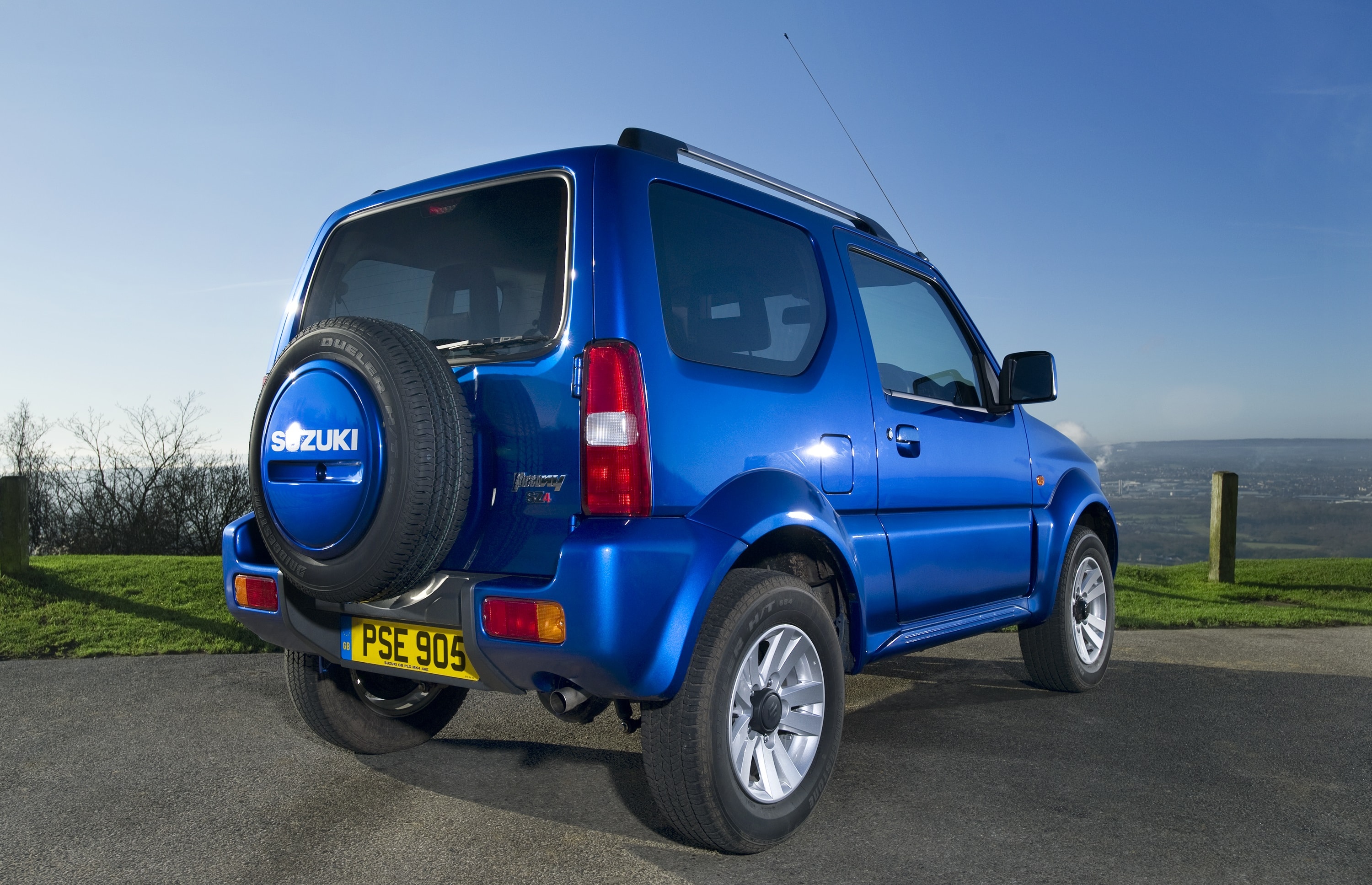 Jimny. That right there is a stupid name for a vehicle. It makes it sound like it was developed and marketed by the team behind Lego Duplo. But then again, we are talking about the company that named one of its cars the same as a hot beverage. Clearly naming cars isn’t Suzuki’s strong point. It’s a good job then, that it can make fun cars. So ignore the silly name, because in the right setting, the Suziki Jimny is a huge amount of fun.

It arrived into the world in 1998. What it is, is a teeny, tiny off-roader. That’s it, plain and simple. It is nothing more, but crucially, it is nothing less. Much like the time-served SJ that came before it, the Jimny loves nothing more than rolling up its sleeves and getting down and dirty. It’s a cheeky little scamp.

See, look at it, splashing about in the mud. It’s having a great time. And so will you. The Jimny is quite, well, agricultural in its design. It’s a chassis-on-body setup, like all proper off-roaders and it has plenty of ground clearance (190mm) so you can drive over rocks, logs, children and ruts with ease. Plus, its stubby face and teeny bottom give it an approach angle of 34 degrees and a departure angle of 46. To those of you who aren’t au fait with off-roading, that means the Jimny can drive up steep stuff without hitting its face, or get down steep things without dragging its arse on the floor like a confused Jack Russell. Good off-roading qualities.

It also has selectable four-wheel drive. On the road the Jimny is rear-wheel drive, making it great for sick drifts, etc. When you hit the path less-followed, you can knock it into four-wheel drive for more grip. Handy. Even handier, you can go further thanks to a low-ratio setting. This is particularly useful off-road, as it means you can use the little bit of torque the Jimny has efficiently. So you won’t get stuck, hopefully.

This is what the Jimny is good for. Hell, it’s what it was built for. It’s a no-frills off-roader, nothing more, nothing less. If you want to go out exploring, you can’t go far wrong with a Jimny. It’s tiny, it’s light (1,090kg) and as we’ve covered, it’s more than capable. The Jimny is a weekend toy. If it were our money, we’d chuck on some extra-knobbly tyres and a little winch on the front before going out looking for mud.

We would not, however, use it as our everyday transport. Why? Well, because as soon as you put it on tarmac, it’s absolutely rubbish. Seriously, walking is preferable. Hell, a Proton Savvy is preferable, and that’s saying something.

Think we’re being a bit harsh? We’re really not. What Car? gave the Jimny one star. Uno. Eins. That’s… well, that’s not good. Unless it’s up to its hubs in filth, the Jimny is pretty terrible. Much like the SJ before it. But why? What makes it so abysmal?

For starters, there’s the way the Jimny drives. That separate chassis might be great off-road, but on asphalt it’s anything but forgiving. The Jimny never feels planted. Instead, it wallows and rolls through the bends like a fat kid trying to slalom on a skateboard. Odd, considering the tiny mass of the Jimny. Though its road manners aren’t aided by the weird, dead-feeling steering and the ‘where we’re going, we won’t be anywhere near a road‘ suspension.

Then there’s the engine. It’s only a 1.3 petrol so it’s a bit gutless, as such, you have to screw the poor little 82bhp lump if you want to break 40mph. Get it on a motorway and it will be howling like a banshee. Though you won’t hear it due to the atrocious wind noise. The Jimny has all the aerodynamic prowess of a phone box. Though it’s probably quieter inside one of those.

Then there’s the interior. It’s sparse, and built from the kind of plastic normally reserved for truck bumpers or those awful school shoes your mum bought from Shoe Zone (dammit, Mum, we wanted Kickers). You have some seats, four in fact, and a steering wheel. That’s about it. Not that you’ll use the back seats for anything other than storage. You’ll only get an actual human in there if they’re foldable, plus the boot is about as big as thimble, so you’ll need that rear bench for your shopping anyway.

It’s about as basic as they come. Oh, and while we normally like to say what EuroNCAP has rated whatever car we’re talking about, we can’t here. The Jimny hasn’t been shot at a wall – at least not in any official context – so there is no safety rating. Though given that standard safety features include two airbags and the outside chance of divine intervention should you hit a tree, we’d suggest it’s not all that safe. It does have stability control though, which should help avoid any oak. Maybe buy a roll-cage, just to be safe.

So it’s crap on the road, or at least it is if you plan to go any sort of distance. For bimbling around town, it’s okay. Not great, but okay. It might rattle your fillings out, but that’s fine, you’re due a check-up at the dentist anyway, right?

You buy the Jimny for fun. Or, as we said, as a second car. It costs peanuts to run. If you do put it on its roof, it’s cheap to fix and if you fill it with wet soil, you won’t feel too guilty about hosing the interior out. What with it barely having one.

Buy a Jimny and go exploring. Bash it about a bit. Giggle as you achieve silly angles of lean and descent. Just have fun with it. Okay, so it’s not the best road car, but in the Jimny’s defence, it never said it was trying to be. It’s following in the footsteps of the simple, fun, go-anywhere SJ. And if you ask us, that’s no bad thing. It’s perfectly fine to be a one trick pony, if that one trick is to be a giggle.