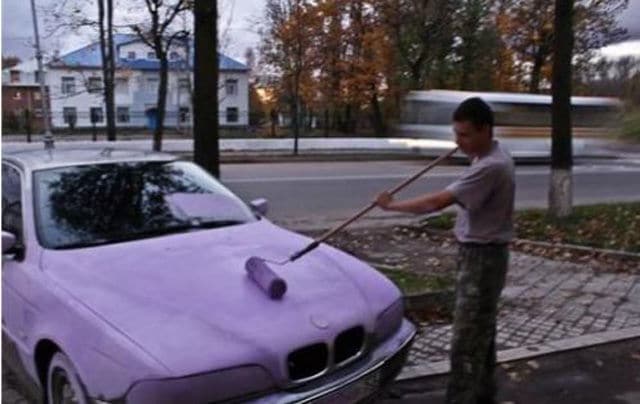 We’ve been making more progress on the Proton, which in turn has prompted many people to ask us why we’re bothering. BECAUSE WE WANT TO, MUM. Jeeze.

But really, are we alone in our love for this car? We can’t be, surely? It’s such an odd duck. A car like this simply shouldn’t have survived. It should have been chopped into a scrappage scheme, or it should have been neglected to the point of it being scrapped. Old Protons don’t generally survive. But this one has. And every time we wipe off a bit of dirt, it looks even better. 23k and it’s nearly thirty years old. Remarkable.

Anyway, rambling aside, what have wee been up to? Well, first of all we tackled some rust. The Saga can rot like buggery, and while rust is minimal on ours, it is still present. Or at least it was…

Muuuuch better. you have to stay on top of these things, otherwise you’re going to be in trouble. And before you point it out, we’ll be laying the colour on the passenger-side arch tomorrow.

The paint match isn’t absolutely perfect, but it’s close enough for an old Proton. It’s also close enough for us, considering we managed to apply it without creating a single run or ripple. INTERNET HIGH FIVE. Though that said, it could be bright blue and full of ripples, it’s still better than rust.

Then we did the last bit of MOT prep. That meant fitting the passenger-side steering rack boot. The driver’s side was a hateful job, given that we have been ape hands and that side of Proton’s engine bay doesn’t allow for said meat-hooks. It made trying to get the inner cable tie on something of a shouty affair.

Happily the passenger-side was a doddle. Well, apart from the track rod end that wouldn’t budge. Here’s a top tip: if you’re going to wollop a track rod end out with a hammer, leave the nut affixed. If you don’t, you twat the thread into oblivion and then you have to spend half an hour filing and fiddling to make it workable again. Still, lesson learned, boot fitted.

Finally, we hit the Proton’s rear-end plastics with this ludicrously expensive Gtechniq C4 trim restorer. But you can read about that right here. Or not, whatever, we’re not your dad.

All that’s left to do now is change the oil and filter and fit a new battery. After that, it’s MOT o’clock, and with any luck, the old girl will be back on the road. Then the fun can really start. Or we’ll end up selling it. One of the two.