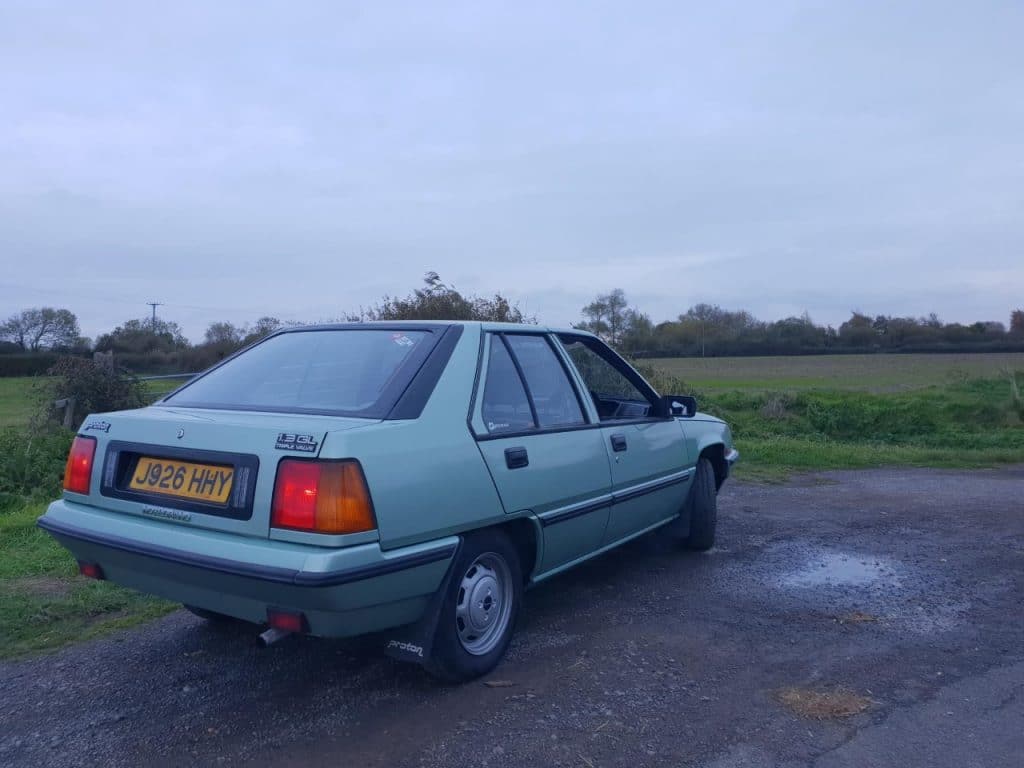 Well then, after a month of tinkering and a whole host of new parts, the Proton is back on the road. She’s insured with our sponsor, she’s taxed and most importantly of all, she has twelve months of MOT. But given that we’re talking about a one owner, 23,000 mile car, was there ever really any doubt?

Well, yes actually, of course there was. It’s always somewhat nerve-wracking to put an old car through its MOT, especially one that has been off the road for three years. And especially when that car is a make and model famous for corrosion. But we needn’t have stressed. We needn’t have phoned the MOT station four hundred times for an update. It passed with flying colours.

Now that the Saga is on the road, we’ve been able to actually drive it. Legality has the bonus. And we can report that it’s an absolute delight, though there is still work to do. For starters, the the short-shift kit we fitted catches on something, which is sub-optimal. That said, it’s still better than having to get into the boot in order to get second, fourth and reverse – the old throw on the gears was horrific.

The alignment needs doing, badly. This is to be expected, as we had to change the steering rack boots, which means taking the track rod ends off. We’ll get it booked in for that next week, as we don’t have the facility/intelligence to so it ourselves.

Also, it’s not running quite as smoothly as we’d like. It seems hesitant sometimes, which it a worry for a 23k engine. It might be the remnants of old fuel, the 12-valve Magma might not like the ‘ultimate’ 98 RON fuel we put in it, or it could be the timing parts we’ve not changed, like the cap, arm and leads. We’ll do some investigating.

The running issue isn’t too much of a concern though. We’ve done fifty miles in it now, and it hasn’t exploded yet, so it can’t be anything too horrific.

Before returning it to our unit, we thought we’d swing by what was once Proton’s UK Technical Training Centre. It’s five minutes from home, it would be rude not to get a snap.

Sadly, the centre has long since closed, given that Proton has pulled from UK markets. It’s now overgrown and empty, and stands as a reminder that Proton had a go in the UK, but ultimately, it wasn’t meant to be. And that’s a shame, because we like our Proton. It’s a good car. It’s slow, it’s not that pretty, but it’s got a certain charm to it, and we like that.

Then there’s the following. Over here in Blighty, a car like our Saga is a bit of a joke. But that’s not the case further afield. We’ve been banding pictures about over our social channels and in doing so, we have discovered that the Malaysians are a passionate bunch when it comes to Proton. Out tweets have been been seen by, literally, hundreds of thousands of people. There have been thousands of re-tweets and hundreds of comments. They really, REALLY love the Saga.

And we’re glad they do. It makes saving this old thing even more worthwhile. If it can make people happy, then that’s just fine by us.

Next up, sort the running issues, then get a decent sound system in it. The tinny speakers in the dash simply won’t do.